The Gophers held their first of 15 spring practices Tuesday afternoon. 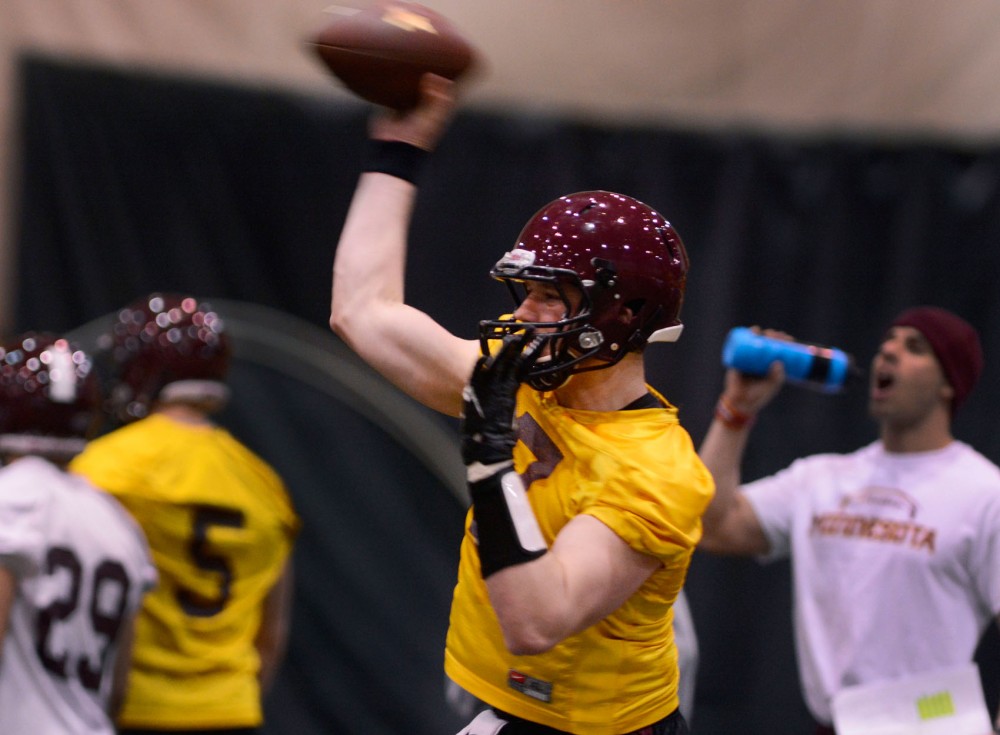 While the cold weather may not indicate it, spring has arrived — for the Gophers football team, at least.

Minnesota held its first of 15 spring practices Tuesday at the Gibson-Nagurski Football Complex. Those practices will culminate with the annual spring game, which is slated for April 12 at TCF Bank Stadium.

The Gophers started their spring season after a successful 2013 season, which ended just 68 days ago.

“These guys aren’t that rusty,” offensive coordinator Matt Limegrover said after practice Tuesday. “I feel like we really picked up right where we left off as far as just continuing to work forward.”

Though nearly six months remain until the Gophers kick off the 2014 season, the team is already preparing for a tough schedule, which includes road games against TCU, Michigan, Nebraska and Wisconsin.

“If our schedule’s tough, we have to be better in the offseason,” head coach Jerry Kill said at a press conference last week.

Kill said the team will use its spring practices to develop young players, keep veterans healthy and improve its red-zone offense. He also said the team will simulate specific situations it faced against opponents from last season.

Last season, the Gophers had their best record since 2003, finishing 4-4 in the Big Ten and 8-5 overall. While the team returns a bulk of players from that squad, it will need to replace defensive tackle Ra’Shede Hageman, defensive back Brock Vereen, quarterback Philip Nelson, wide receiver Derrick Engel and linebacker Aaron Hill, among others.

“When he came back from the bowl game, he was working the day after,” Kill said. “He’s taken charge of everybody — defense, offense, everything. So it makes you better.”

Leidner started only four games last season, but he made 10 appearances. He finished the year with 619 passing yards for three touchdowns and one interception. He also ran for 407 yards and seven touchdowns.

“[Kill] basically said, ‘Hey Mitch, for better or for worse, here we go,’” Limegrover said. “And I think he’s really taken to that.”

Gophers senior running back David Cobb said he thinks it helps the offense to know that Leidner is at the helm.

“There’s not that panic, that worry, that stress every rep,” Cobb said.

Leidner and the Gophers are looking to improve their passing game after an inconsistent 2013 season.

That increase in production through the air could come from wide receivers Donovahn Jones and Drew Wolitarsky, who both had promising freshman campaigns. It could also come from tight end Maxx Williams, who led the team in receiving yards last season.

Kill said overall, he was pleased with how the first practice ran Tuesday.

“We got a lot of young guys that improved and feel good about it,” he said.