Don Lucia is out. Here’s who could replace him.

Lucia stepped down on Tuesday after 19 years as head coach of Minnesota. 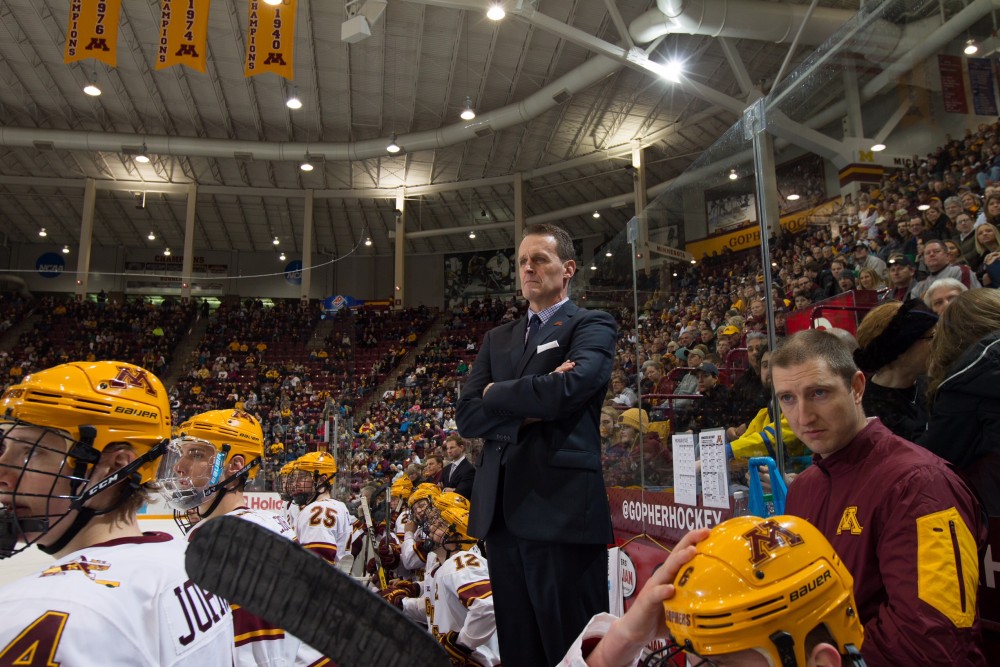 The Gophers are replacing a head coach for the first time in almost 20 years.

Minnesota has had five head coaches since 1972, though that number will soon be six. Former head coach Don Lucia stepped down Tuesday, which opened up the role for the first time since 1999.

It is now up to athletics director Mark Coyle to find a replacement; here are some names he could consider. There have been no official reports of the athletics program reaching out to any potential replacements thus far.

Bob Motzko is a familiar face for Minnesota. Motzko was an assistant coach under Lucia from 2001-05, helping Minnesota to its first two national championships since 1979. After his time at Minnesota, he moved to his alma mater, St. Cloud State, where he has coached for the last 13 years.

Motzko has had one of his most successful seasons with the Huskies in 2017-18. He led the team to sit at No. 1 in the nation for much of the season, and kept them in contention to get a No. 1 seed in the NCAA Tournament that starts Friday.

In an interview with the St. Cloud Times on Tuesday, Motzko declined to comment on the Gophers’ opening.

Just a season ago, Grant Potulny was an assistant coach on Lucia’s staff. Before that, Potulny played at Minnesota under Lucia and graduated in 2004, after two national championships and three years as a captain.

Potulny helped Minnesota’s offense garner success in his time as an assistant from 2009-17. Also, he posted a 19-7-2 record with Northern Michigan this season, his first as a head coach.

Mike Guentzel has been a fixture around the Minnesota program ever since he suited up as a defenseman for the first time in 1981. After that, he went on to coach United States Hockey League teams, then he became an assistant at Minnesota under former head coach Doug Woog in 1994.

He remained an assistant for the Gophers until 2008, and eventually came back after a break to be Lucia’s associate head coach from 2011 through this season.

When asked about who he thought would be a good successor for the head coaching position, Lucia made the case for how passionate Guentzel is about the program and his loyalty to Minnesota hockey at his press conference Tuesday.

Mike Hastings has brought the Mavericks to the NCAA tournament four of his six years at the helm. Similar to other potential options, he was a one-time assistant to Lucia in 2008-09.

Robb Stauber fits the bill as a Minnesota alumnus and a coach who has recent success. He coached the USA women’s olympic team to a gold medal in PyeongChang, South Korea. In addition to his coaching success, he was a goaltender and the first at his position to win the Hobey Baker award.

Stauber served as the Gophers goalie coach under Lucia from 2000-2008.

Tom Ward was a defenseman for the Gophers from 1982-85 and was an assistant under Doug Woog from 1995-99. He now is an assistant coach for the NHL’s Buffalo Sabres.

Todd Richards played for Minnesota from 1985-89. He became an NHL coach in the late 2000s and was a head coach for the Minnesota Wild and Columbus Blue Jackets before going on to be an assistant for the Lightning.

Rohlik led the Buckeyes to a second place conference finish and a No. 1 seed in an NCAA regional this season. He is a native of St. Paul, but went to Wisconsin from 1986-90. He was an assistant coach at Minnesota Duluth before going to Ohio State to be an assistant then a head coach.