Panelists from both parties agreed that President Donald Trump's administration drove voters to the polls. 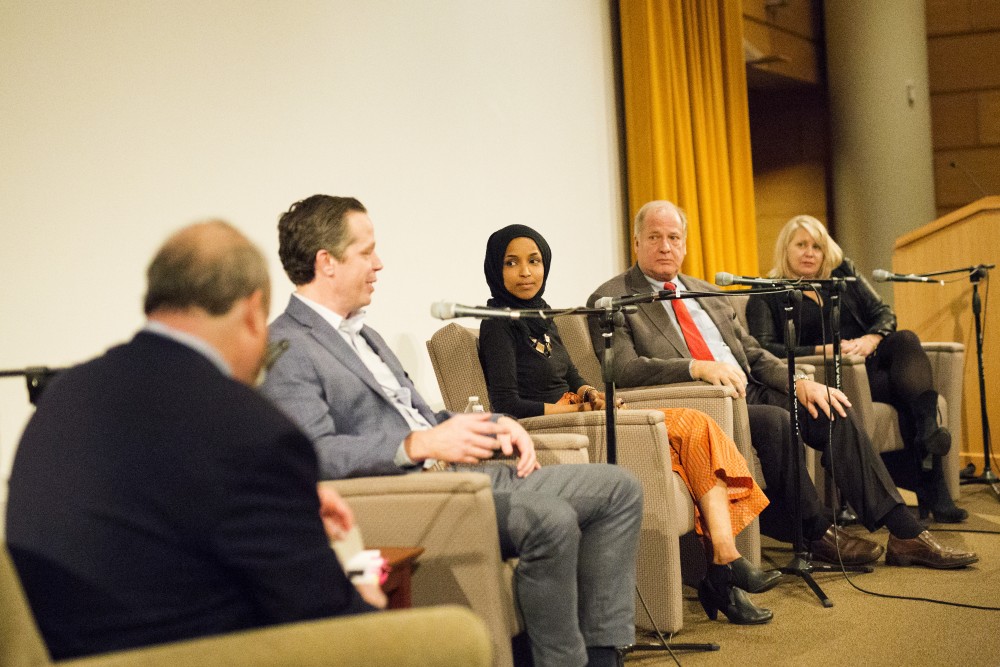 Ben Golnik, Ilhan Omar, Denise Cardinal and Vin Weber converse at the Post-Election Analysis event at the Humphrey School of Public Affairs on Wednesday, Nov. 6. The event took place the night after midterm elections to discuss what happened and the state of Minnesota.

Fresh off her victory in the midterm election, Congresswoman-elect Ilhan Omar met with Republicans at a University of Minnesota panel to unpack Tuesday’s results.

With all Minnesota precinct results in, the DFL has gained control of the state House of Representatives, while the Republicans have retained a majority in the Senate. Democrats also took control of the U.S. House of Representatives. Omar was joined Wednesday by DFL and Republican panelists at the Humphrey School of Public Affairs to process Tuesday night’s conclusions and what they mean for future Minnesota politics.

“I think the message really was [that] we do not like to be pushed around. Americans wanted to say we decide what kind of country we are and how we operate,” Omar said. “There was a clear rejection of the politics of fear and rejection.”

Panelists on both sides of the aisle were quick to agree the midterms were a triumph for Minnesotan Democrats, who they said voted largely in response to U.S. President Donald Trump.

“It was a rejection of Washington, and our candidates paid all the way down the ticket,” said Ben Golnik, executive director of the the Minnesota House Republican Caucus.

Although the Democrats’ triumph in the state House is politically significant, former 2nd Congressional District Rep. Vin Weber, R-Minn. said this shift is not surprising for a midterm.

“The outcome was about what’d you expect for a midterm. … It was not the blue tsunami that we had heard about,” said Weber. “But given the high levels of turnout, the president motivated both sides. But the Democrats won.”

Golnik said state House Republicans were unseated by voters who were unhappy with Trump, rather than the local politicians themselves.

“I think a lot of [the candidates] are victim of what happens nationally,” said Golnik.

Weber said the party lacks a clear agenda and needs to focus on the growing population of suburban voters.

“Republicans are doing well on a burning platform,” said Weber. “It’s great that Northern Minnesota is more Republican, when it used to be very Democratic … but it’s a declining percentage of the state’s population. So if they don’t become competitive in the suburbs, it does not go over well in the long term.”

Democrats are looking ahead to 2020, reflecting back on the most recent presidential election to inform their next moves, said Cardinal.

“Listen, 2020, that’s a lifetime,” said Cardinal. “What I can say is, I think Democrats are learning their lessons. In 2016, there’s been a lot of internal analysis … looking about what we are for.”