Briean Boddy-Calhoun and Eric Murray are both likely draft picks. 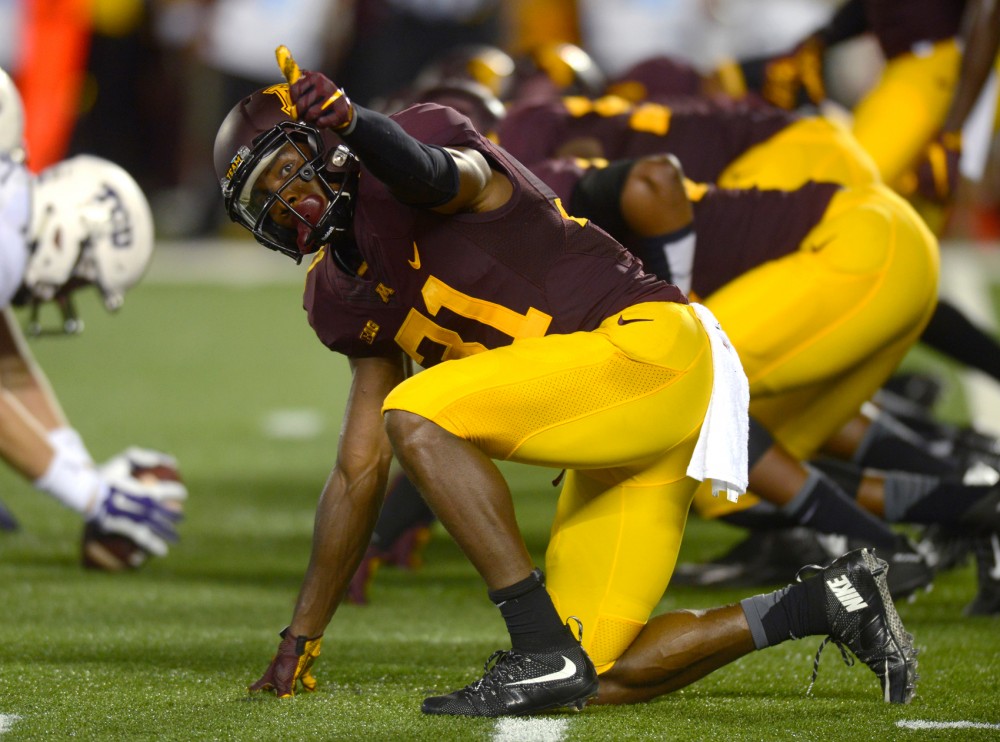 Minnesota defensive back Eric Murray gives a thumbs up moments before a play on Sept. 3 at TCF Bank Stadium where the Gophers faced Texas Christian University.

Mike Hendrickson
The NFL Draft starts on Thursday, and two former members of the Gophers secondary are likely to hear their names called.
Cornerbacks Eric Murray and Briean Boddy-Calhoun played a combined 91 games as Gophers, and each anchored a secondary that finished fourth in the Big Ten in passing yards allowed in 2015.
Murray was voted on the All-Big Ten Third Team this year by coaches and media, while Boddy-Calhoun was a Third Team selection by the media.
Now the pair is likely to ensure that Minnesota will have a defensive back drafted for the third year in a row.
Murray is projected to go in the fifth round, while Boddy-Calhoun is projected as a seventh-round selection or undrafted free agent, according to CBSsports.com.
“The predictions are so unstable; you just can’t get caught up in it,” Murray said at his pro day in March. “Once you let it fill your head, you start to lose a little bit of work ethic.”
Going anywhere in the draft would’ve counted as a surprise when the two were in high school, as neither player was heavily recruited.
Murray’s only college offer coming out of Riverside University High School in Milwaukee, Wis., was Minnesota’s.
Boddy-Calhoun started out in Coffeyville Community College in Kansas after graduating high school in Delaware. He transferred to the Gophers after one season.
The idea that he would make it from Coffeyville to the NFL didn’t sink in for Boddy-Calhoun until he was training in California in January.
“I was around high-caliber guys, and guys were giving me props when they saw my film,” Boddy-Calhoun said at his pro day in March. “That’s when I would say it became a true reality for me.”
Murray said he always thought he could play in the NFL one day and set that goal for himself early on.
“It’s been a long [journey], but I still got a lot in me,” Murray said. “I’m just going to keep working until I can reach the pinnacle of Eric Murray.”
One of the cornerback’s best attributes at Minnesota was his durability. Murray never missed a game or practice in four years while making 39 starts and 192 tackles.
“That’s my pride and joy right there,” Murray said. “You got to take some pride in that, for being tough.”
Head coach Tracy Claeys, who worked with both players as the team’s defensive coordinator and has been a Division I coach since 2001, had high praise for Murray before his last college game.
“He’s the best overall player that I have ever coached,” Claeys — who’s worked with 2009 first-round draft pick Larry English and former Pro Bowl linebacker Bart Scott — said before the team’s bowl game in December. “When you talk about how physical he is, how well he runs. He may make a mistake once, but you show him, and he’ll correct it.”
Boddy-Calhoun battled injuries more than Murray, as he tore his ACL two games into the 2013 season and battled another knee injury as a senior.
He participated in the NFL Scouting Combine in February along with Murray, and at his pro day he said he felt 100 percent.
“Looking back, I wouldn’t change a thing,” Boddy-Calhoun said. “It made me stronger. It made me battle some more adversity, which I love to do.”
The two now could have NFL battles ahead of them, something that didn’t appear likely when they arrived on campus. But the two often watched NFL games together, and Boddy-Calhoun said they came to one conclusion.
“You watch some guys and are like, ‘I think I’m better than him,’ ” Boddy Calhoun said. “That’s when we started to get the idea that we are actually pretty good and can definitely play at the next level.”
Delete Image
Align Left
Align Center
Align Right
Align Left
Align Center
Delete Heading