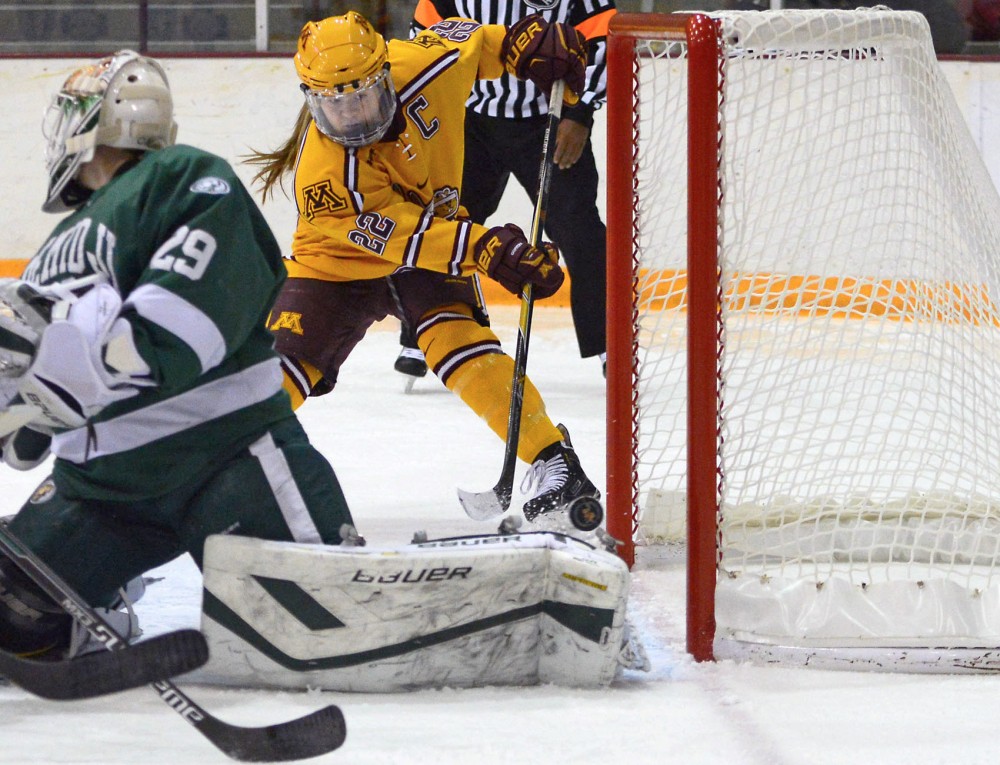 Six current and former Gophers players helped the U.S. team win gold on Feb. 21-22 in PyeongChang, South Korea during the 2018 Olympics. Those players have since returned to the U.S. and stayed busy in the weeks that have followed.

The team first celebrated with family and friends after the game, on the rink and at dinner. The players took three hours to get off the ice because of celebrations and media.

One of the stops for the team was in Washington, D.C., where they helped with a hockey clinic that consisted of more than 250 girls, most between the ages of five and 11.

“I think that was my favorite part about everything we did,” former Gophers hockey player and USA player Hannah Brandt said. “Being able to interact with fans and young girls that had been watching the game and following the Olympics and [were] so excited about what we had done.”

The team stayed in South Korea for a few days after the game, then flew to Los Angeles, where they stayed for one day. While they were in California, the team made an appearance on Ellen DeGeneres’ show and went to a Los Angeles Kings game.

Then, the team flew to Tampa, Florida, which was the home of their training ground for around six months prior to the Olympics. They went to a Tampa Bay Lightning game and got to give thanks to the people that helped them while in training.

Besides helping out kids at a hockey clinic, the team also went to the NHL Stadium Series game between the Capitals and Maple Leafs at the Naval Academy in Washington, D.C. At the game, they were celebrated alongside the men’s curling team, which also won gold at the Olympics.

“It was breathtaking because it was at the Naval Academy,” former Gophers hockey player and USA player Dani Cameranesi said. “Before the game started, the ships all came out and there was so many of them that they surrounded the entire rink and the fighter jets that went over, and fireworks. We got announced during one of the intermissions and the roar from the crowd was so loud, I swear you could hear it from a mile away.”

They made a stop in New Jersey to go to a U.S. women’s soccer game. The two teams have connected with each other as they both pursue opportunities for equal pay in their sports.

“Getting together with that group of athletes was cool because they’ve been going through the same thing we have,” former Gophers hockey player and USA player Kelly Pannek said. “It’s cool to bring that full circle.”

The hockey team also went to New York, where they toured Sports Illustrated, met Jimmy Fallon and went to the top of the Empire State Building. Some of the team went to the New Jersey Devils game, while others went to the New York Rangers game during the trip.

“We were able to talk to them as they were playing,” Brandt said. “That was probably the coolest thing we did in New York.”

The group as a whole went back to Tampa and the former Gophers players went to Minnesota after that. The six current and former players were then honored for winning gold in the state they played college hockey.

“My favorite part of it all has been being home,” Cameranesi said. “Bringing it back to the community and to the people that helped me along and essentially where my whole journey began.”