Students say using the tunnel system is confusing, despite past improvements. 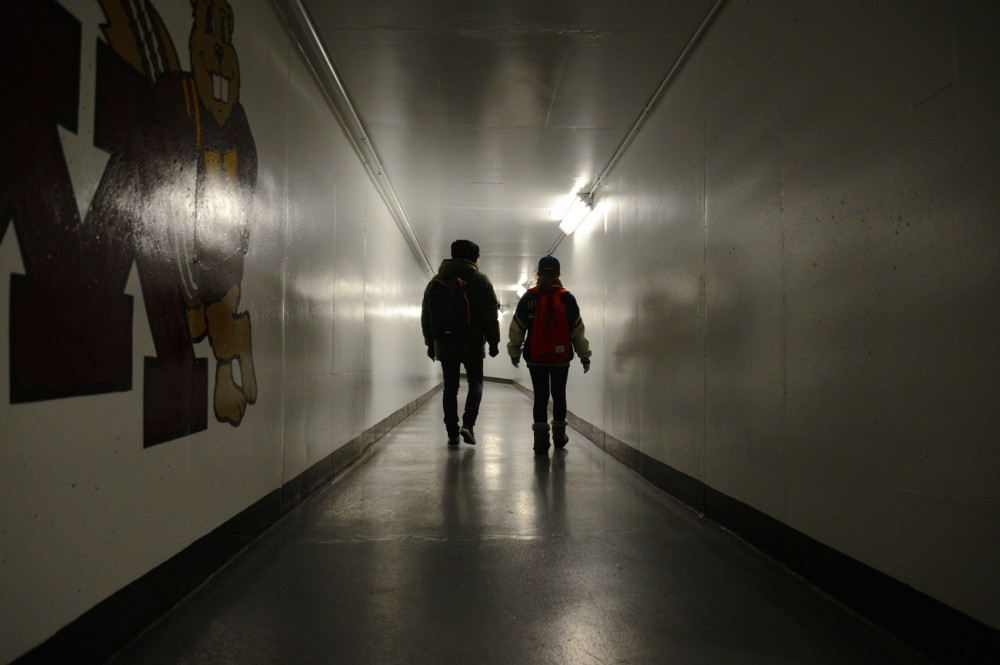 Two people walk in the Gopher Way near Nolte Hall on Monday, Feb. 17, 2014. The University updated the tunnels in the 1990s to make it easier to navigate, but students say they still have difficulty using them.

Despite their burrowing namesake, few University of Minnesota students use the school’s Gopher Way tunnel and skyway system.

Students who do use it say they like the tunnel system because it’s useful and warm, but many others say the Gopher Way is difficult to navigate.

McShane said he thought the tunnels were convenient but could be easier to navigate.

“I definitely got lost a few times,” he said.

While he said he’s gotten much better at finding his way in the system, McShane still has trouble when he has to go to a different floor to stay inside.

Nutrition junior Stacy Marlette said she has seen the signs for the Gopher Way but has never used the system because she heard using them takes longer.

Marlette said she’s also worried about her safety in the tunnels. She said that the tunnels at University of Nebraska-Lincoln, which she previously attended, were closed for security reasons.

Parking and Transportation Services spokeswoman Jacqueline Brudlos said the Gopher Way contains cameras so that nearly every stretch is within the view of one. There are also mirrors installed near particularly sharp corners.

Theater junior Joe Eisenmenger said the difficulty of navigating the tunnels prevents him from using the Gopher Way.

Eisenmenger said he could have used the system before, but he wasn’t sure how to navigate it and didn’t want to risk getting lost or being late to class.

“I knew it existed, but I didn’t necessarily know how to get to it,” he said.

Eisenmenger said the system would be easier to navigate if it were clear where students could enter and exit the system.

Associate neuroscience professor Lorene Lanier has an office along the Gopher Way in the Molecular and Cellular Biology building.

Lanier said the hallway sees a lot more traffic because of its location. But much of that traffic is faculty heading to seminars, not students.

Lanier said she likes that more people walk by and that faculty members occasionally visit her office. But when it gets busy, she and other faculty close their doors, which she said can inhibit communication.

A brief history of tunnels

The University’s tunnel system began in the 1920s when the first one connected the Nolte Center and Northrop Auditorium.

The tunnel and skyway system continued to grow as the University did, Brudlos said. By the 1960s, there were “quite a few” tunnels, but the system wasn’t very easy to use, partly due to a lack of signs.

“There was nothing really to direct people from point A to point B,” Brudlos said.

At that time, students and faculty who knew the system well were the only ones who used it.

Parking and Transportation Services created a map of the system and installed signs with arrows directing students to the next building. Brudlos said the goal was for the next sign to always be within sight.

The signs carried the new Gopher Way moniker and were circular and darker-colored to stand out against other signs.

In an email statement, Assistant Vice President of Capital Planning and Project Management Suzanne Smith said the University decides to build new tunnels based on their connection to other buildings, available elevator access, security and the cost and ease of building one.

For example, the University left the new dorm off the grid because a city-owned street and underground utilities owned by private companies separate it from other campus buildings, Smith said in the statement. Restricting access would also have been a challenge, she said.

But Smith said the planned Microbiology Research Facility will be connected by skyway to the nearby Cancer and Cardiovascular Research Building and the rest of the Biomedical Discovery District.

According to the area’s master plan, the district won’t connect to the rest of the University system.