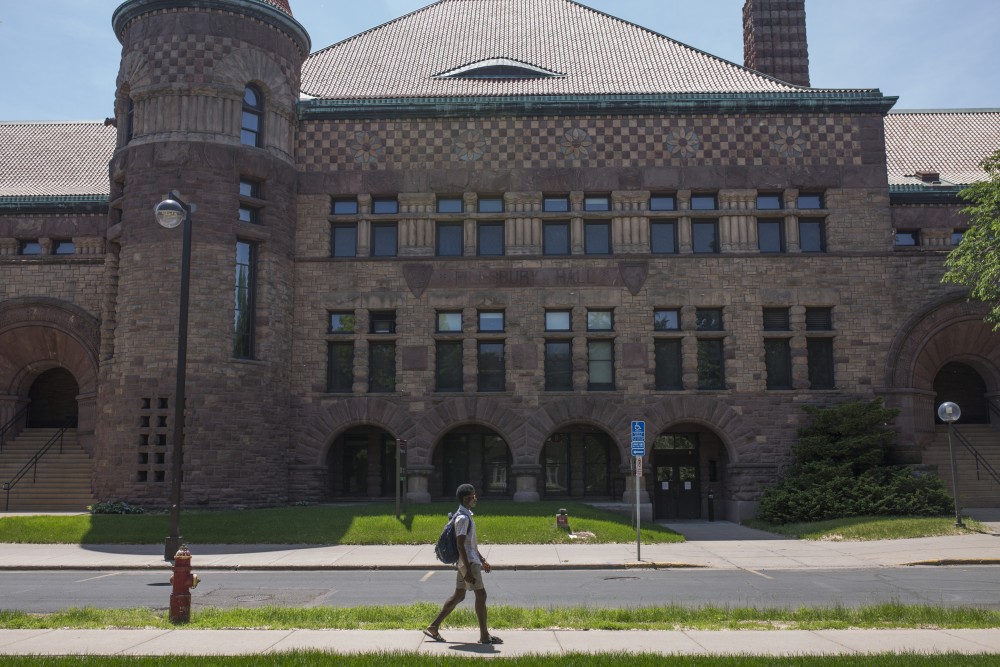 A view of Pillsbury Hall on Monday, May 28, 2018. Pillsbury Hall will be the new home for the English department due to funding from the bonding bill.

While the University of Minnesota’s Pillsbury Hall will receive renovations following the passage of the bonding bill on Wednesday, the Higher Education Asset Preservation and Replacement was not fully funded.

DFL Gov. Mark Dayton signed a bonding bill after it passed the Minnesota State Legislature last week. In the bonding bill, the University received around $79 million of its original $238.5 million capital request.

The bill allocated roughly a fifth of the University’s HEAPR request, as well as full funding for Pillsbury Hall and Glensheen Mansion renewal projects.

Once renovated, Pillsbury Hall will house the University’s English department, a move the school has wanted for several decades.

The University will receive $24 million in state funding for Pillsbury Hall and plans to spend $12 million of University resources to complete the renovation.

While Pillsbury Hall’s exterior “shell” was updated a few years ago, the interior of the building needs to be almost completely renovated, Vice President of University Services Mike Berthelsen said.

“There isn’t anything in the building that doesn’t need to be addressed,” Berthelsen said. “It will be like a new building inside of a historic shell.”

Without a central location, the English department currently uses spaces scattered throughout campus.

“English is the heart of the humanities at the [University] and to have a building rather than to be squatters in somebody else’s buildings would make a huge difference,” said Julie Schumacher, a professor of creative writing at the University.

Securing funding for Pillsbury Hall has been an uphill battle, she said. “For years there were faculty working very hard to get this to happen and some of us wondered if it would ever happen,” Schumacher said. “Now that it’s pretty close we’re all biting our lips and hoping this actually happens.”

The University received $45 million of its original HEAPR request. This partial allocation will increase the University’s deferred capital maintenance over the next 10 years, which currently totals about $4.2 billion,  Berthelsen said.

“We will be able to make some important investments in some critical spaces, but in total the overall campus health will continue to diminish,” Berthelsen said.

The University needs between $150 million to $250 million a year to maintain facilities, Berthelsen said. He added that over 8 million of the University’s 29 million square feet across its five campuses is in poor or critical condition.

While the University will be able to finish some HEAPR projects like the Andrew C. Boss Laboratory in St. Paul and the Field House, a variety of other buildings and maintenance projects will have to wait until additional funding is secured, Berthelsen said.

Rep. Jennifer Schultz, DFL-Duluth, an economics professor at University of Minnesota-Duluth, said she was disappointed by the amount of HEAPR funding the University received.

The Legislature allocated $8 million in HEAPR funding to the Duluth campus, which is not enough funding to cover a single project on the school’s priority list, she said.

Satellite campuses in the University system, like the Duluth campus, have also faced issues with aging and outdated infrastructure. Some classes held in buildings with no ventilation or air-conditioning reached temperatures up to 90 degrees during the school year, forcing faculty to cancel class, Schultz said.