Something Tribal comes this way, again

A weekend-long belly dancing workshop shows off the spread and popularity of the Middle Eastern dance style in Minnesota. 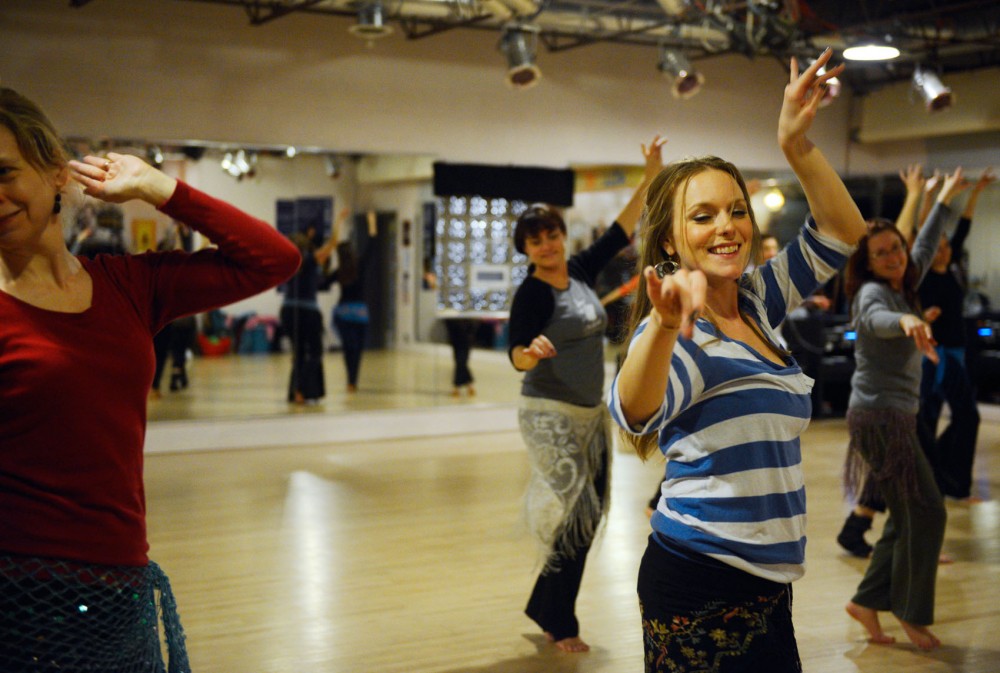 The differences between the various types of belly dancing are as nuanced as the dance moves themselves.

For some, the words “belly dance” conjure up the image of a woman with a jangly scarf around her thin but soft waist, an exposed midriff and bare legs. Perhaps she’s in a dimly lit restaurant, swaying her hips to the beat of Middle Eastern drums and instruments.

For others, it might mean a group of women in bold ethnic folk costumes rolling their thick curves in unison on stage.

While serious dancers within the community make a point to clearly define the many styles of dance that the average person would generally label “belly dance,” they also recognize their interconnectedness.

These dance styles will come together in “Something Tribal This Way Comes,” the second annual weekend-long belly dancing workshop in St. Paul.

Cassandra Shore, owner of the Jawaahir Dance Company in Minneapolis, started teaching belly dancing in the basement of a Greek nightclub in 1977. She was one of the restaurant’s main performers at the time and started getting requests for lessons.

“I wanted to create a legacy of professional dancers like what I was used to seeing from the bigger cities, like San Francisco and New York City,” she said.

Now, there are several well-established schools around the Twin Cities and more opportunities for dance students to perform than ever before.

Shore estimates there are roughly 300 students who regularly practice belly and folk dancing between the different dance studios in Minnesota.

“We compare very favorably with the bigger cities. People come from all over the country for my weeklong intensives,” she said. “We have a knowledgeable community with high technical standards.”

Shore said only a select few of her students approach dance as a profession, about half perform in public without pay, and the rest just dance as a fun social outlet and exercise commitment.

Shore practices and teaches a very traditional style of dance, having learned specific routines and movements from folkloric troupes around the world.

Carolena Nericcio, owner of Fat Chance Belly Dance in San Francisco, also had very traditional training but eventually moved in her own direction in 1987 after her instructor’s troupe disbanded.

“At that point, belly dance was just belly dance. There weren’t so many different styles that we have now,” she said.

Nericcio began to develop her own performance aesthetic by blending folk art, tribal jewelry and tattoos. Her dance began to take on a much more improvisational style in which she performs in groups and uses nonverbal communication to cue the next move.

“It looks like choreography. That’s probably the downside. Because it’s so seamless, the audience doesn’t know that it’s improvised,” she said.

People started to reference her dance troupe as “tribal” because of the old-world feel of their costumes.

“Then some of the traditionalists named it American Tribal Style because they were concerned that what we were doing was becoming more traditional to the American eye,” Nericcio said.

She’s not teaching at the workshop, but her registered style of dance is now so widespread that it’s included in almost every class at “Something Tribal This Way Comes.”

Nericcio said the Internet has contributed to the explosion of different subcultures’ popularity but that belly dancing remains in an “underground, niche market,” despite its growth.