Many fear closing the bar and venue will be a great detriment to the local hip-hop scene. 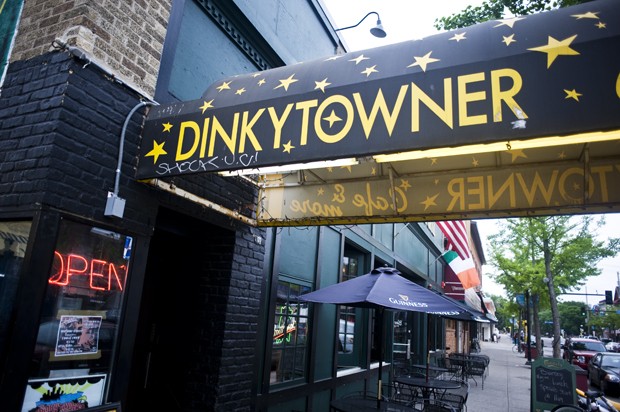 For a little less than a decade, the Dinkytowner CafÃ© has inhabited its darkened underground space in the heart of Dinkytown. But at the end of the month, this diverse establishment will be forced to close its doors. âÄúWe were hit by a perfect storm of problems,âÄù said Dinkytowner co-owner Kyle McCarty . The perfect storm, he explained, involved an order by the city of Minneapolis to refurbish the facilityâÄôs kitchen at a cost of an estimated $50,000, a determined bank and the failure to secure a long-term lease from the landlord. âÄúWe could have handled any one these on their own,âÄù McCarty said, âÄúbut not all at once.âÄù McCarty and co-owner Brian Elias took control of the Dinkytowner from McCartyâÄôs uncle five years ago. Neither McCarty nor Elias thought there would be any trouble running the Dinkytowner, despite an order from the city to upgrade. âÄúWhat we have right now works perfectly fine,âÄù explained Elias. One of the upgrades the city mandated was the installation of an exhaust hood in the kitchen that would cost the Dinkytowner $20,000, despite the fact that the Dinkytowner had existed without one for the past 15 years. âÄúThere is nothing critically hazardous with the Dinkytowner,âÄù McCarty said. âÄúWe just need to modernize to a point that the city wants us too.âÄù According to the owners, the city began their investigation of the Dinkytowner earlier last year, which is when the mandate to upgrade the facility was given. The pressure to comply with the requests had been mounting for some time, Elias said, until around a month ago when the fact that they had to be done very soon had become clear. âÄúWith a long term lease, we could have done [the repairs],âÄù Elias said. But without the guarantee of future ownership, they were not willing to invest money. The issues with the bank came about when a previous business partner, McCartyâÄôs uncle, had tied the assets of the Dinkytown to a loan which had eventually been defaulted on, McCarty said. The bank began to come to the Dinkytowner to collect earlier in the year, which added more pressure to the situation, McCarty said. After May 31, the DinkytownerâÄôs last business day , the property will be vacated, leaving the refurbishments to current landlord Bob Harmon. As to what will happen after the space is reopened, both said they did not know, though they mentioned hearing that Harmon, who is the landlord of both the Dinkytowner and Blarney Pub and Grill , had plans to give the space to his son. The lease had been reoffered to Elias and McCarty but at a much higher rate they were not willing to pay. Had they decided to stay, Elias said, they wouldnâÄôt have been able to work for themselves âÄî they would be working for the rent.

âÄòThe fatal blow to hip-hopâÄô
Among other things, the Dinkytowner has been home for many years to the developing rap and hip-hop community, a group that many feel will be severely damaged by its closing. âÄúThis could be the fatal blow to hip-hop community,âÄù said Mark Thone, an owner of the Mindstate Distribution, a hip-hop supply store in Dinkytown just across the street from the Dinkytowner . âÄúThe Dinkytowner was willing to let just about everybody come in and do a show.âÄù Some of the artists who began their careers playing places like the Dinkytowner have often ended up making it big in Minneapolis rap and beyond. âÄúI was looking at the set list for this yearâÄôs Soundset , and I counted 18 that had at one time or another played at the Dinkytowner,âÄù McCarty said about the regional hip-hop festival. St. Paul Slim and Prof âÄî Meyer Warren and Jake Anderson, respectively âÄî of the local Stophouse music group could be considered longtime Dinkytowner breakouts. With their new album ironically called âÄúRecession Music ,âÄù the group has had more recent critical acclaim, though they could remember a time when the Dinkytowner had helped them get off the ground. âÄúThe Dinkytowner played a role in 85 percent of all local rappersâÄô careers,âÄù said Anderson. âÄúDoing shows down there made me better.âÄù Warren called the Dinkytowner a âÄúcrucial spot for hip-hop in the Twin Cities.âÄù âÄúTo me, the Dinkytowner meant a place that I could call home,âÄù he said. So far, the hip-hop community has experienced a bit of a shuffle-around because of the Dinkytowner closing. The âÄúLast of the Record BuyersâÄù show, which had taken place every Thursday at the Dinkytowner, has moved to The Fifth Element in Uptown, and different acts are finding new places to play. Tony, the manager of STPâÄôs Finest, a small-time rap group based out of St. Paul that played at the Dinkytowner last weekend, said that although there were other places for the group to play in Minneapolis, âÄúto lose this place, you will lose a lot of hope for the kids.âÄù
The niche
Some feel the DinkytownerâÄôs absence could adversely affect the community. âÄúIt was a place that attracted mostly people from outside of the University community,âÄù McCarty said. âÄúIt brought in people who never would have been down together.âÄù The niche filled by the Dinkytowner was one âÄúthat people were overlooking,âÄù Elias said. âÄúYoung or old, gangsta, grunge âÄ¦ on any given night, every one of them was in here,âÄù he said. Elias and McCarty said that when creating the Dinkytowner, they had hoped to establish a place in which everyone felt comfortable. âÄúThe place has such a good vibe; you really donâÄôt see many fights. Everyone is usually getting along and here to have a good time,âÄù Elias said.
Community Reaction
The closing of the Dinkytowner came as a surprise to many shop owners in the community. Mike Kendall, owner of Gold Country Campus Apparel in Dinkytown, said he hadnâÄôt heard of the DinkytownerâÄôs closing. âÄúI donâÄôt think that [the closing] is part of a trend in Dinkytown that IâÄôm aware of,âÄù he said. Frank Vescio, owner of VescioâÄôs Italian Restaurant, down the street from the Dinkytowner , agreed with Kendall. âÄúIt can be difficult in this economy,âÄù he said, mentioning that he has experienced a slowing of business. Amid these concerns about the economy, McCarty maintained that the Dinkytowner was making good money and that a lack of business was not one of the reasons why they were closing. For many, the closing of the Dinkytowner will be a very difficult experience. Corey Christopher, an off-and-on employee of the Dinkytowner for the past four years, said he heard stories of Dinkytowner patrons breaking down and crying when they heard the news.
The future
Both McCarty and Elias agree that they plan to open another restaurant eventually, but they could not say when they would be able to. Ideally, McCarty said, the new establishment would also be in Dinkytown, which may be difficult because of limited space. Another difficulty in possibly reopening another Dinkytowner would be recreating the atmosphere of the space. McCarty said he expected the final concerts this weekend to be more celebratory than sad lamenting for the Dinkytowner. âÄúWe are thinking about having former employees drink for free,âÄù Elias said. âÄúThere arenâÄôt many former Dinkytowner employees.âÄù