The sophomore has seen improvement since stepping into a starting role. 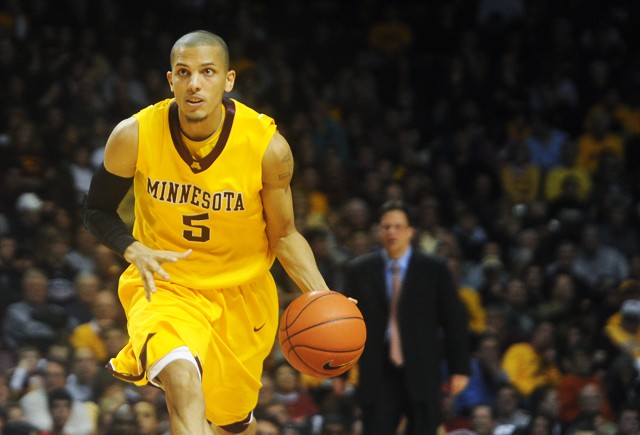 Gophers menâÄôs basketball coach Tubby Smith said after his teamâÄôs most recent victory that his team is accepting its identity on the court. This is the case at the point guard position, where sophomore Devoe Joseph was thrust into the starting spot in late January. ItâÄôs been a mixed bag for Joseph and the Gophers (16-10, 7-7 Big Ten), who face No. 3 Purdue just as they appear to be rising from a slide that began before Joseph took over the starting point guard. âÄúHeâÄôs in a role that heâÄôs growing in, and itâÄôs not what he was recruited to do,âÄù Smith said. Joseph was primarily the backup point guard as a freshman. The Gophers added freshman point guard Justin Cobbs before this season, so Joseph saw more time as a shooting guard until junior Al Nolen was ruled academically ineligible five weeks ago. âÄúIâÄôve had my ups and downs,âÄù Joseph said. âÄúEven though I played [point guard] last year, itâÄôs always a transition.âÄù Joseph had an impressive offensive performance in his first start, which included 16 points, a career-high seven assists and just one turnover in a one-point loss to No. 6 Michigan State on Jan. 23. But in four of the seven games since, Joseph has committed four turnovers, which remains the biggest shortcoming in his offensive game. âÄúItâÄôs always tough when you switch to the point guard position,âÄù said junior guard Blake Hoffarber. âÄúEveryone has those brain lapses every now and then, but it happens to all of us.âÄù Hoffarber and senior guard Lawrence Westbrook, the teamâÄôs two leading scorers, have been under less pressure because of the offensive threat Joseph brings, Smith said. Joseph has scored 8.5 points per game this season, including an average of 11.7 points the last three games. He has also averaged 4.5 assists in the last eight games. By comparison, Nolen scored 6.7 points per game before he became ineligible and had a 4.6 assists-per-game average. But NolenâÄôs 2.96 assist-to-turnover ratio remains a high bar for Joseph, who ranks sixth in the Big Ten with 1.63 assists per turnover in conference games. Joseph has improved from a 0.91 assist-to-turnover ratio as a freshman, and he said Nolen has helped him both offensively and defensively this season. âÄúEven in the games, heâÄôll say, âÄòDevoe, stay aggressive,âÄô âÄù Joseph said. âÄúHeâÄôll just give me little pointers and little tips every day.âÄù NolenâÄôs absence has been felt even more on defense. In eight games without him, the Gophers have allowed 11 opposing players to score at least 19 points. All but two teams have made at least nine 3-point field goals against the Gophers in that time. The Gophers had more success with a zone defense in victories over Wisconsin and Indiana last week. Smith said the team doesnâÄôt need Joseph to match NolenâÄôs 2.39 steals per game. âÄúWe need him to play position defense, be in the right spot and contain his guy, make the proper rotations, get us in the right defense,âÄù Smith said, adding that JosephâÄôs defense has been âÄúadequate.âÄù The Gophers will likely need more than that against Purdue (23-3, 11-3), though. The BoilermakersâÄô offensive weapons are as good as any group in the Big Ten. They feature All-Big Ten candidates in center JaJuan Johnson (14.8 points per game, 7.0 rebounds per game), forward Robbie Hummel (15.8, 7.2) and guard EâÄôTwaun Moore (17.2, 3.6, 2.9 assists), who has averaged 18.7 points in three career games against Minnesota. It wonâÄôt be any easier for the GophersâÄô offense, particularly Joseph. Boilermakers guard Chris Kramer, a three-time All-Big Ten Defensive team selection, has three steals in each of his last four games against Minnesota. With three more steals, he could set the Boilermakers career record. Though Kramer will be attacking a challenging part of JosephâÄôs game, Smith and the players said their point guard has done a good job. âÄúHe just needs to do a better job of being stronger with the ball,âÄù Smith said. âÄúIf he does that, heâÄôs going to be great. HeâÄôs going to be good.âÄù