Leandro Toledo has lost only one match to start the spring season. 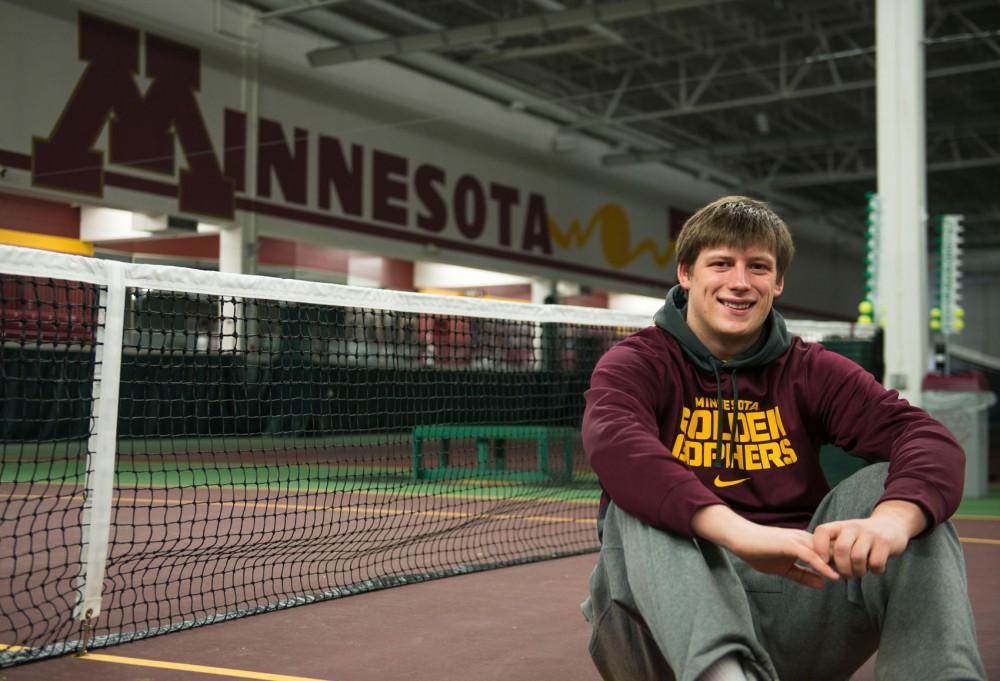 Minnesota's Leandro Toledo sits on the courts at the Baseline Tennis Center on Monday morning. Toledo has assumed he No. 1 singles position for the Gophers this season.

A tennis racket, a tennis ball and a wall — that’s all it took for Leandro Toledo.

As a 7-year-old growing up in Hamburg, Germany, his mother used to take him along to his older sister’s tennis practices.

Toledo remembers passing the time by hitting a ball against a wall off in the distance.

“That’s how it all started,” he said with a laugh. “It was just playing against a wall, but I liked it.”

It’s safe to assume that head coach Geoff Young is thankful for that wall.

Now, almost 15 years after he first picked up a racket, Toledo is a junior holding down the No. 1 singles spot for the Gophers men’s tennis team.

Young said the first time he saw Toledo, he knew he had the skillset to become a special player for Minnesota.

“He had a great serve and was solid off both sides on the ground,” Young said. “I saw his potential right away.”

That potential has developed in Toledo’s three years with the Gophers.

He arrived on campus as a raw talent from Karthause Gymnasium, a boarding school in Koblenz, Germany. Toledo said he knew about Minnesota because of his longtime friendship with former Gophers tennis players Julian Dehn and Tobias Wernet.

“I talked to a few other schools, but the [possibility] of me going to Minnesota was already pretty high,” Toledo said. “It was mostly Minnesota from the start.”

Toledo pretty much cemented himself in the No. 2 singles spot as soon as he stepped foot on the courts at the Baseline Tennis Center.

It was clear he was ahead of the curve in terms of talent but needed to work on his on-court consistency.

“His freshman year, he used to go through swings in the match,” Young said. “Now he’s able to sustain it throughout the whole match.”

This season, he needs to.

Toledo said he assumed the spot was his after Bonin left, but he said it’s something he’s been working toward since he got to Minnesota.

“I felt the pressure, of course,” Toledo said. “It’s always nice to have a challenge, and I’m really looking forward … to making a name for myself.”

Bonin, who’s still around the team this season as a student assistant coach, said he’s tried to serve as a mentor for Toledo this season.

“We all knew this was going to be his spot this year,” Bonin said. “It was kind of expected.”

Bonin said he stressed to Toledo before the season that competing at No. 1 singles for the Gophers is not all about on-court success.

“It’s not just about winning the match,” Bonin said. “It’s also about being a leader on the team and being an example.”

Toledo has apparently taken that advice this season, and the German import has driven his team on and off the court.

He has lost only one match in the spring season, but Young said he’s been just as impressed with Toledo’s leadership skills.

Still, Young said he thinks Toledo is far from his ceiling as a tennis player.

“If it’s a really big match, or if the team really needs him, he will win,” Young said. “It’s the everyday [grind] … that he needs to improve.

“And if he can do that, I think he can be an All-American. He has the skills.”

That wall in his hometown wouldn’t stand a chance now.