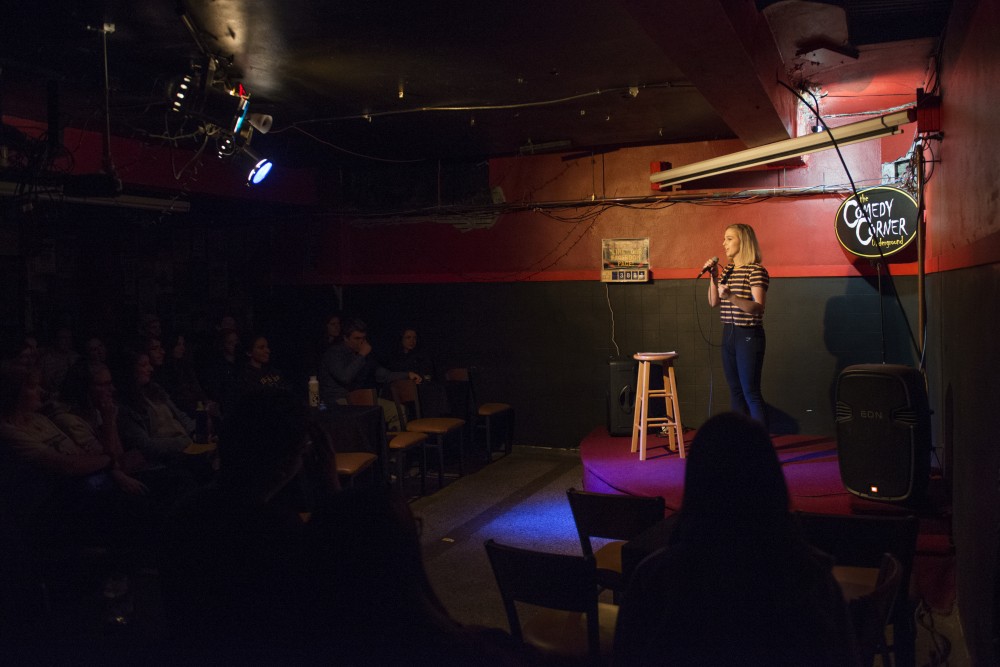 Vice President of the Comedy Club Caroline Skoog performs a standup bit at the Comedy Corner Underground on Thursday, Oct. 4.

The University of Minnesota’s Comedy Club shares a rare form of art appreciation with the campus community: laughing so hard that you forget it’s only Wednesday night.

The Comedy Club is a student group that encourages people to seek out comedy as they would music or theater. They run free monthly showcases at the Comedy Corner Underground on West Bank, which has been their go-to venue for the last few years.

“I think as a campus and a city and even in the world, we just really need laughter more than anything right now,” said Caroline Skoog, the vice president of the club and a junior studying English and studies in cinema and media culture. “[The club tries] to push past boundaries but in a way that makes sense, a way that doesn’t offend anyone. We’re trying to find the right tone.”

Omena Giles, a sophomore studying conservation biology, is the club’s secretary. She has been part of the Comedy Club since her freshman year and joined through the suggestion of a friend.

“I didn’t start going to meetings until like November and I just remember feeling a bit nervous and pressure to be funny,” Giles said. “People were doing bits and laughing constantly so it was easy to get addicted to that kind of environment … After a while, I just kind of jumped in with the joking. It felt very natural.”

“Everybody writes jokes differently,” she said. “I physically write out my whole joke. Some people kind of keep it all up in their head and improv to an extent, but … it makes me feel better to have the jokes fully written out.”

Giles came to the University from a small, arts-based high school. The first few months of her freshman year were what she calls a “classic freshman story.”

“Once I found Comedy Club and the whole comedy community here at the [University], it got so much smaller and I mean that in the best way,” Giles said. “Suddenly … I had a really tight group of people who weren’t afraid to be silly and were super supportive of each other. We’re just all kind of funny quirky people.” Sage Troolin, club president and a journalism senior, came to the Comedy Club after years of experience as a church comedian and high school pep fest emcee.

“In church in, like, middle school they had little open mics,” Troolin said. “You did have to say religious stuff when you were up there, but I figured out that you could say funny stuff for a while and then you could tie it back to some kind of lesson at the end.”

Moving on to performing stand-up at high school pep fests, Troolin became known as the “funny person” and found the Comedy Club during her freshman year at the University.

“It wouldn’t be good compared to college comedy, but in high school people thought it was funny,” Troolin said. “Then I came to college. I hadn’t heard about the Comedy Club until second semester and then I was like, ‘oh maybe I’ll go.’ The rest is history.”

Troolin remembers her first freshman showcase as “nerve-wracking.” She wrote all of her notes on the inside of a water bottle label because she didn’t think she was allowed to bring them up on stage.

At the most recent showcase, which took place last Wednesday, Troolin got out of her comfort zone and attempted new character work.

“I pretended I was someone with small hands,” Troolin said. “It wasn’t my best set ever, but I never do that so it was kind of fun to get out of my comfort zone.”

“I have this little red notebook and I tried to write ‘Mao’s Little Red Book’ in the bottom right-hand corner but I accidentally wrote it upside down in the top left,” Levitt said. “And I write my things in it and drawings and stuff.”

Each comedian prepares for a performance differently. Levitt bullet-points his jokes in his notebook and takes a really long shower the morning of the showcase.

“Every time I have a show … I basically just … talk to myself in the shower for too long to be in there,” Levitt said. “If it’s funny to the voices in my head, maybe it’s funny to somebody else. That’s hopeful thinking.”

While the voices in Levitt’s head may be trustworthy most of the time, they were not particularly helpful for one of the showcases.

“I had one that the crowd did not like,” Levitt said. “I have this stretchy shirt so I can pull my shirt down to like my knees. So I have my pants on but then my torso just looks really long. He’s a superhero named Surprisingly Long Torso Man and he was just, it was so bad. It was one of the stupidest things.”

Regardless of a bad bit every once in a while, the Comedy Club aims to celebrate all voices. Students with or without stand-up experience are welcome to join and spend a night laughing with friends.

What: The Comedy Club