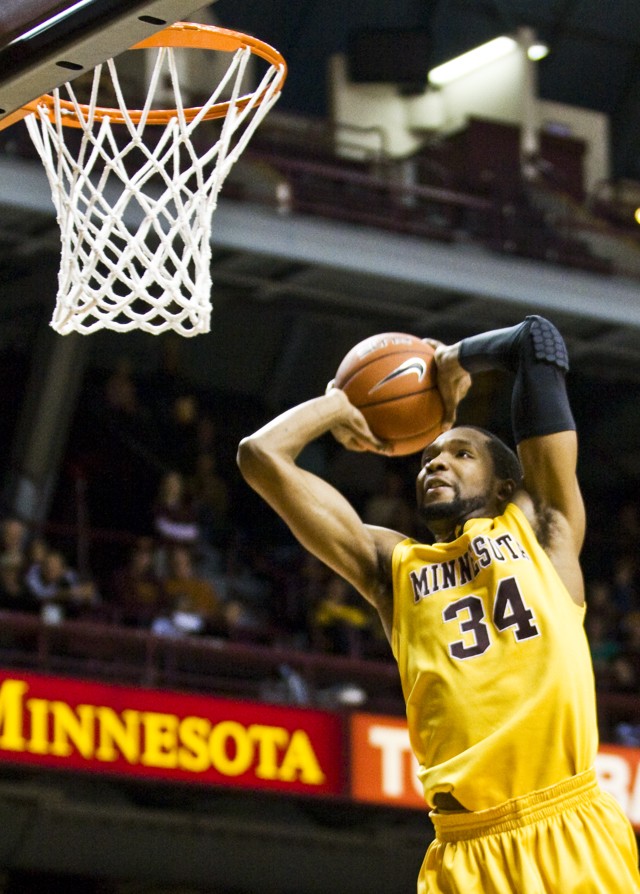 The Gophers went inside and then outside for a wire-to-wire opening-night win at Williams Arena on Friday. No. 25 Minnesota outscored Tennessee Tech 22-0 on points in the paint in the first half and shot 68 percent âÄî including 7-of-11 from 3-point range âÄî in the second half on its way to an 87-50 victory. After their lead was cut to 28-21 with less than two minutes to go in the first half, the Gophers went on a 9-1 run, capped by a halftime-buzzer-beating 3-pointer from senior guard Lawrence Westbrook. Westbrook scored 13 points in the second half and finished with a game-high 22. âÄúYou always want to jump on a team in the second half,âÄù said Westbrook, who made a pair of 3-pointers and a layup from his own steal within the first four minutes of the second period. âÄúIf you can kind of step on them there, you kind of can crush them for the whole game.âÄù Before WestbrookâÄôs buzzer-beater, Minnesota was 1-of-13 from 3-point range. Westbrook made 3-of-4 shots from long-distance in the second half, and four other Gophers made second-half 3-point shots. For most of the first half, the Gophers relied on their defense, forcing 17 turnovers, including 11 steals. âÄúWhen youâÄôre not making shots, youâÄôve got to be able to do the other things well, and we blocked shots and rebounded and kept picking and probing,âÄù Gophers head coach Tubby Smith said. Minnesota did find offense in the first half from sophomore center Ralph Sampson III, who was perfect on three turnaround jumpers. Sampson, who led all players with nine rebounds, said he worked on his post moves this summer with his father, Ralph Sampson Jr. âÄúIâÄôm probably going to have to expand my repertoire a lot more as later on in the season, people start learning the way I play, but tonight it worked well for me,âÄù Sampson said. Freshman forward Rodney Williams Jr. led all Gophers bench players with 14 points in 21 minutes. He also had two blocks and two steals to go along with a couple of crowd-energizing dunks. âÄúHe jumps higher than anybody IâÄôve ever seen âÄ¦ [He can] score on the break or block shots âÄ¦ If he keeps working on his game, the skyâÄôs the limit for him,âÄù Westbrook said. The Gophers blocked 12 shots in the second half and finished with 15, their highest total since a school-record 17 against Bowling Green last season. Suspended senior guard Devron Bostick and junior forward Trevor Mbakwe, who is also not allowed to play yet, were on the Gophers bench in street clothes Friday night. Freshman forward Royce White, who has been suspended indefinitely, was not on the Gophers bench. Smith said Friday night that White remains suspended and wouldnâÄôt comment further on the situation.