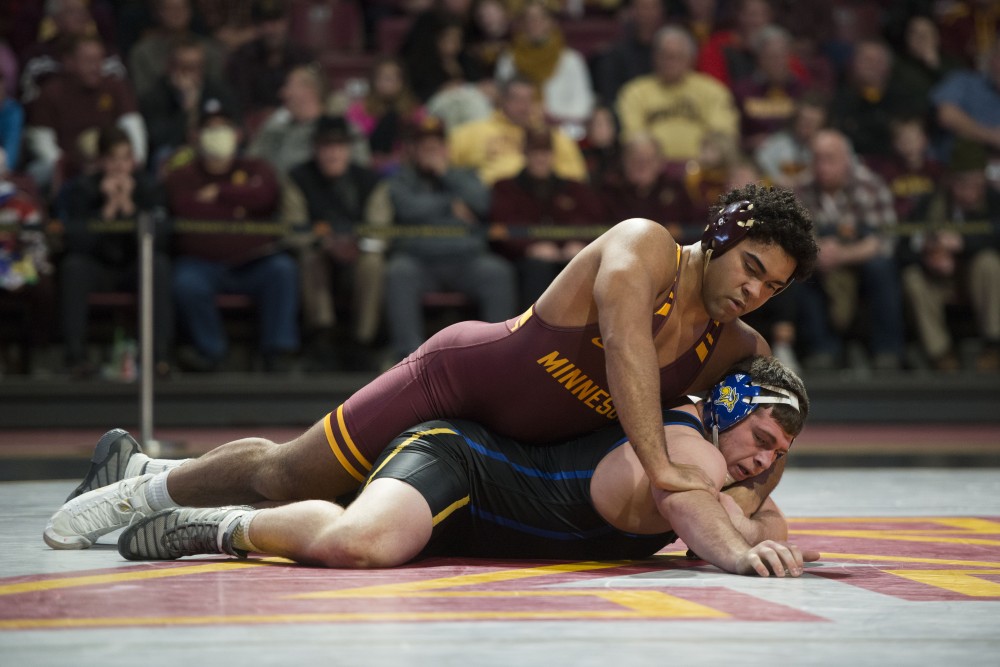 Freshman Gable Steveson at 197 competes during the match against South Dakota State on Sunday, Nov. 25 at Maturi Pavilion.

In the 97th meeting between the two border rivals, the Gophers continued the athletic department’s winning trend against the No. 14 Wisconsin Badgers (6-5, 1-5 Big Ten). Minnesota clinched the dual with Wisconsin at a 27-13 final on Friday.

“We wrestled pretty well. Wisconsin upset us in a couple of lower weight classes and our guys up top picked us up,” Gophers wrestler Devin Skatzka said.

The Gophers were 6-3 as a team in Madison and earned the team’s 62nd win against the Badgers.

Freshman heavyweight phenom and top-ranked Gable Steveson dominated No. 9 Trent Hillger 11-2, which puts Steveson at 23 consecutive wins on the season.

“He has so much offense that it makes it difficult for guys to truly attack him,” said head coach Brandon Eggum.

The dual between the border rivals began with an early 6-0 lead after the Badgers’ forfeited the 125-class.

No. 8 in the 133-pound class Ethan Lizak began the night with a close 5-4 decision. After getting a late takedown in the first period and a stalling call in favor of the Gophers in the second, Lizak looked almost guaranteed for a victory.

However, Wisconsin’s Jens Lantz answered in the third with a takedown and two escapes, but Lizak took the match due to riding time.

With the Gophers ahead 9-0, No. 8 Mitch McKee faced off against No. 13 Tristan Moran. By the end of the second period, McKee was primed to win the match with a 5-1 lead after two takedowns and an escape. Moran answered, tying the match up late in the third and sending the match into extra time, which he won by a fall to make the score 9-6 in favor of Minnesota.

No. 20 Tommy Thorn answered the McKee upset with an upset of his own.

Thorn defeated Cole Martin, the No. 9 wrestler in the 149-pound class, 5-2 after forcing a reversal with the match at 3-2. The victory increased Minnesota’s lead to 12-6.

“[His win] was big, man, the way he came out and fought was something,” Eggum said.

No. 10 Steve Bleise followed in Thorn’s footsteps with a victory.

Bleise had an early takedown and never looked back as he won his match 6-2, which put the Gophers up 15-6. The winning streak ended there as 165-pound Carson Brolsma faced-off against No. 3 Evan Wick, who won the match easily with an 8-0 after two-take decision.

No. 12 Skatzka however, put the Gophers back on track as the 174-pound wrestler won by a technical fall after four near falls in the first period.

“That’s kind of my game plan to go out there and get a takedown as fast as I can to shock the guy,” Skatzka said.

Dylan Anderson followed at 197 and scored three points in the second period, which was enough to win him the match.

Steveson rounded up the dual with a major victory against another top-ten opponent in Hillger. After an early near fall, Steveson took control of the match and went on to win 11-2.

Minnesota will return to action Super Bowl Sunday when it hosts Purdue.