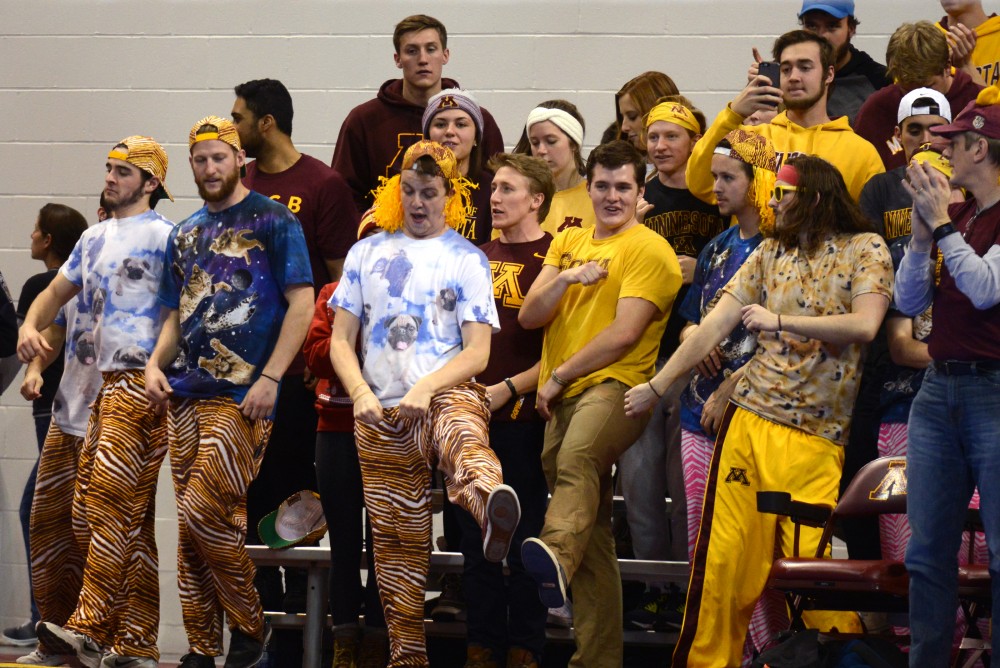 Volleyball fans celebrate another point scored by the Gophers in the Sports Pavilion on Saturday, Dec. 10, 2016.

While one chapter continued for the Gophers on Saturday, another ended.

Both regional matches hosted at the gym saw large, lively crowds, making for an atmosphere players say they will long cherish.

“The Sports Pavilion is just an amazing place to play,” said senior middle blocker Sarah Wilhite on Saturday. “Especially tonight, the crowd showed up. They were loud, and I think that brought the energy to our side.”

The student section — popular throughout the season — swelled in size while the team hosted NCAA play. The section hosted around 250 students per match in the regular season, but spilled over to 315 in attendance Saturday.

Students started to show up over an hour before match time. Some were turned away for capacity. To gain access to the match and join, some students even turned to ticket scalpers.

“The Gopher Block” has become host to a cast of colorful characters over the course of the season.

The women’s hockey team frequently appeared in costumes that ranged from a bottle of ketchup to an astronaut toward the end of the season.

The team couldn’t attend over the weekend due to a road series, but the Gophers still had plenty of support.

A group of fans dressed in Zubaz and cat shirts became a student-section staple this season, known for their zany attire and unwavering support of the Gophers.

“Even back in the days where there were few fans, we loved the Gophers and we’re here to support them,” said Tanner Glaza, an environmental and ecological engineering student. “Whether it’s a Sunday afternoon or a Friday night, we’re here because we love them.”

The Minnesota fans got creative over the weekend, holding signs with messages like, “Killhite,” “U C LA, We see OH,” and “Making Goehns,” all to references to Minnesota players and the team’s sights — a national championship.

Another familiar Gophers fan made an appearance Saturday — Minnesota’s own “blanket lady.” She’s a regular at women’s basketball, known for waving a blanket to rile up the crowd, and she stopped over at the Sports Pavilion to pump up the student section.

Minnesota hasn’t lost at the Sports Pavillion in over two seasons, partially thanks to an environment that fans call “electric.”

While the fans think that the players build off of them, the team is what really gets the crowd going.

“We know the team plays its heart out for us, so we like to be there to give a little something back to them,” said Antonio Rivera, a communications student.

While Minnesota won’t have any more home matches this season, the Sports Pavilion has a certain way of drawing its fans and athletes to return in the future.

“I’m going to miss playing at the Pav, but I think our best is yet to come,” Wilhite said. “We’ll be back. We’ll be the ones cheering loud next year.”