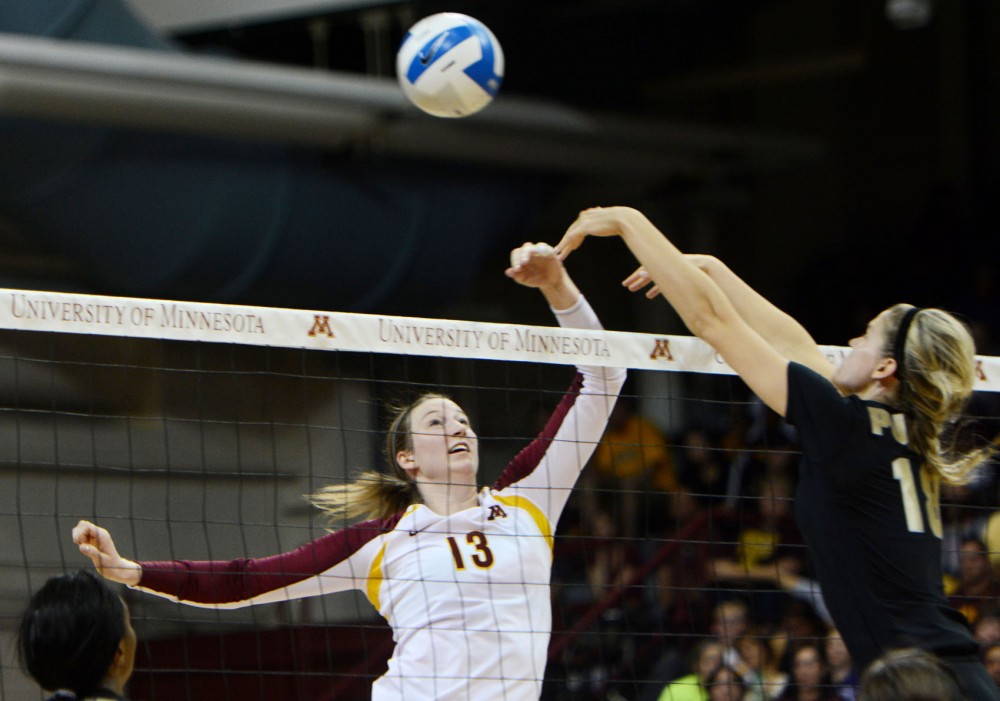 Gopher's Ashley Wittman makes a kill against Purdue on Sunday at the Sports Pavilion.

The first time the Gophers volleyball team played a ranked opponent this season, it resulted in a five-set loss — the only stain on Minnesota’s season so far.

But the second time around, the outcome was a little different.

Gophers head coach Hugh McCutcheon said the difference between that first match Sept. 14 and his team’s most recent excursion against the Boilermakers was simple.

“I think we’re better now than we were then,” he said.

“Especially on a Sunday afternoon game, I’ve never seen so many fans there before,” senior outside hitter Ashley Wittman said.

McCutcheon said the team’s serving was strong Sunday. While the Gophers managed just two aces courtesy of sophomore outside hitter Daly Santana, they succeeded in knocking Purdue out of its system often.

He said the disparity between the Gophers’ highs and lows was substantial and will need smoothing out before two weekend road trips in which Minnesota will play three nationally ranked teams.

The Gophers’ hitting improved steadily throughout the match. They hit .135 in the first set, .350 in the second and .500 in the third. Wittman attributed that to improved passing. She was the main hitter in the first set, managing five kills.

“As the match went on, we got everyone involved [and] our passing … cleaned up,” Wittman said. “We got all our hitters involved.”

To help fix the passing, McCutcheon subbed in junior outside hitter Morgan Bohl to assist in the back row. She received nine serves and made four digs in a key role that energized the Gophers’ defense.

“Obviously in practice, we work on coming in and making a difference,” Bohl said. “And that was like something that I really wanted to do.”

While the Gophers now sport a 14-1 overall record and a 2-0 conference record, the Big Ten could be in for a shake-up this season based on other action from around the conference.

This weekend, No. 15 Michigan State took down No. 13 Ohio State and No. 1 Penn State on the road — making Monday’s latest national poll one to watch.