The club estimated it raised $12,000, which will help pay for competitions. 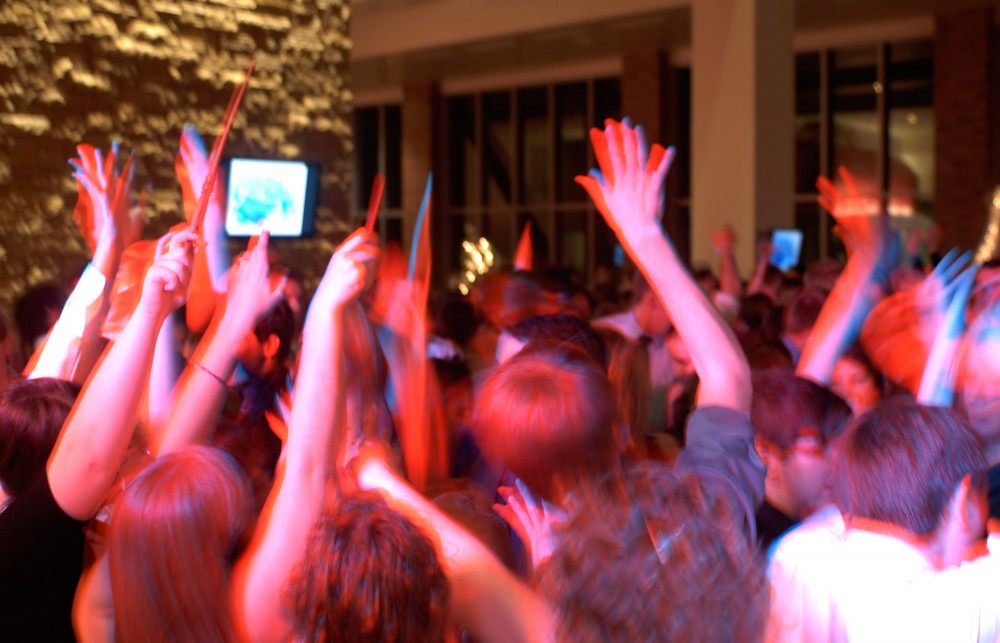 Hands and wands go up on the dance floor during the Yule Ball Friday night at the DQ Club Room in TCF Bank Stadium. The ball was hosted by the University Quidditch League as a fundraising event.

The University of Minnesota Quidditch League brought the Yule Ball âÄî a tradition from the Triwizard Tournament in the fourth book of Harry Potter series âÄî to campus Friday night to raise money for the groupâÄôs travel to competitions.

Almost 800 guests filled the DQ Club room at TCF Bank Stadium to support the group by buying tickets to the ball.

For biology freshman Hayley Emerson, the Yule Ball was a chance to de-stress before finals. She anticipated attending the fancy party for almost a month before celebrating Friday night with a friend.

Since it was founded last year, the Minnesota Quidditch League has grown into the second largest program in the International Quidditich Association, with almost 200 members that play on 11 intramural teams and one competition team.

They play a âÄúmuggledâÄù or non-magical version of the wizarding sport that is played on flying broomsticks in the books.

Team manager Sara Gapp said the competition team traveled to the Midwest Cup in Indiana and the World Cup in New York City this fall.

In NovemberâÄôs World Cup, the UniversityâÄôs team made it to the Final Four out of the 94 teams. Because it hadnâÄôt played in competitions before, the team was ranked No. 81, but took out No. 3 Louisiana State and No. 2 Kansas. The team lost in the semifinals to Florida. Middlebury College, where Muggle Quidditch was founded, took first.

Luke Zak, the president of MQL, said the team sold more than 700 tickets before the ball and expected to sell 800 including door sales. At $20 each for presales and $25 at the door, they estimated they would bring in about $12,000.

Apart from $3,000 or $4,000 spent on setting up the event, Zak said most of the money would go to support competitions and equipment maintenance for the team.

Tex Ostvig, a volunteer staff member from the Multicultural Center for Academic Excellence, said the event helped bring students and faculty together.

As a Harry Potter fan, Ostvig said he signed up for the event as soon as he heard that there was a need for help from faculty members.

âÄúThe University staff is always supporting student organizations,âÄù he said. âÄúI think one of the benefits âÄ¦ is being able to interact with students, being able to meet students and also letting them see we as staff want to be engaged and involved in their community as well.âÄù

After she bought a dress just for the event, Rachel Silkworth, a University junior, said she couldnâÄôt miss out on the chance to show off her fondness for Harry Potter.

âÄúItâÄôs nice to have things to get away and to not worry about [school] for one day before things get pretty stressful,âÄù she said.

In an email, Gapp said she hoped the Yule Ball event would turn into an annual event. She said the goal is to continue the promoting Quidditch on campus.

âÄúFor a lot of students who are college-aged, they are the true Harry Potter generation,âÄù she said.