The head coach’s seizures follow him on and off the field. 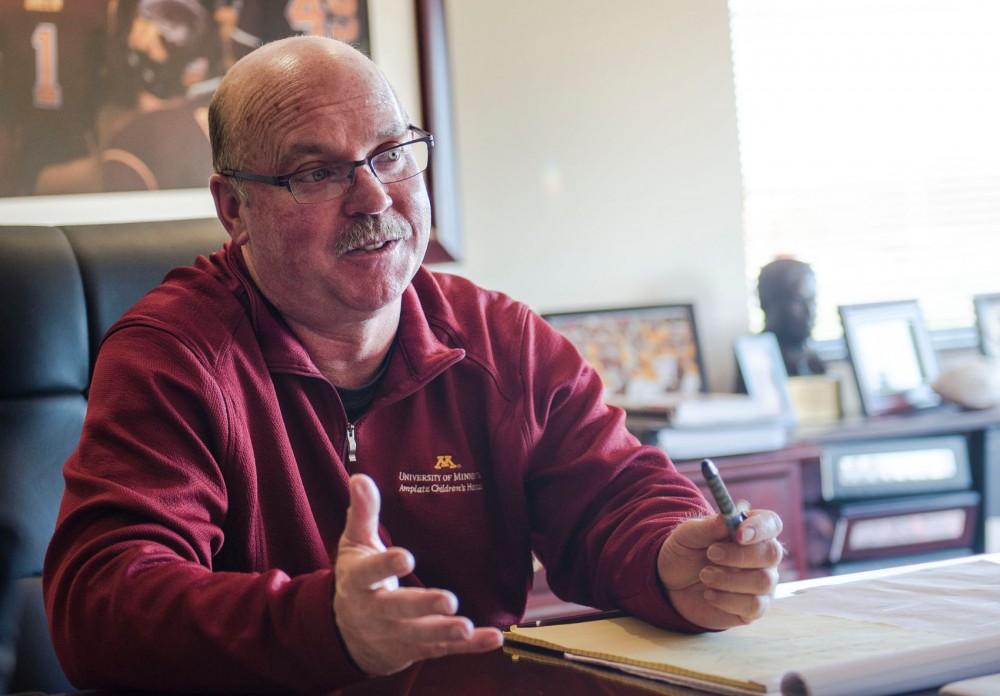 In the last 15 years, he’s toured the Midwest, taking over four struggling teams and redirecting them.

He’s climbed the coaching ladder, and this season his Gophers are 8-2 and once again relevant in the Big Ten.

But health concerns have followed Kill at nearly every stop in his career.

He’s had seizures on and off the field, intensified after a bout with kidney cancer. Until last year, he didn’t publicly acknowledge his epilepsy — a brain disorder in which a person has repeated seizures.

This season, he finally decided to do something no one thought he would: step away from the sidelines and focus on his condition.

“I’ve got my back against the wall,” Kill said. “I’ve got to quit putting a Band-Aid on it.”

In October, the University announced Kill would take extended time away from the team to focus on his epilepsy treatment.

“We feel like we’ve got the help we needed, and we’ve learned even more in the last month,” said Rebecca Kill, his wife of 30 years. “I feel like we’re on the right track.”

Jerry Kill has had two game-day seizures this season and hasn’t officially coached a game since Sept. 28. His assistants have handled the majority of coaching duties in his absence, inviting speculation about how Kill’s epilepsy affects his coaching career.

Silence in the stands

Sept. 10, 2011. Kill’s first home game at Minnesota. The Gophers were locked in a close battle with underdog New Mexico State.

In the waning seconds of the fourth quarter, Minnesota drove down the field, trying to avoid an embarrassing upset.

With all eyes on the field, the Gophers’ first-year head coach collapsed on the sideline.

A packed TCF Bank Stadium, cheering raucously seconds before, was stunned into silence as emergency medical personnel tended to Kill. They took him off the field before time expired.

It was Kill’s first public seizure at Min­nesota. A week later, he told media he had 20 seizures in a six-day span.

For the first time, Minnesota faithfuls were privy to a condition that had stalked the coach since 2000.

2000. Emporia State athletics director Kent Weiser said he was sitting at home on a Sunday morning when defensive coor­dinator Tracy Claeys called him and said, “Coach Kill is in the hospital.”

It was the only “episode” Weiser remem­bered in Kill’s time at Emporia State, but it signaled the balancing act that would follow.

Kill’s health and job performance could directly correlate, according to Dr. Imad Najm, director of the epilepsy center at the Cleveland Clinic in Cleveland. Najm said both sleep deprivation and stress are linked to seizures. As a college football coach, Kill subjects himself to what Najm called “pre­disposing factors” that provoke seizures.

In press conferences, Kill has alluded to long workdays and mentioned arriving at the football facilities as early as 6 a.m.

“When your brain don’t get rest and you’re sleeping two and a half hours a day … sooner or later, something is going to give,” Kill said.

Weiser said he was concerned for his foot­ball program after Kill’s seizure but said he was also worried about his coach’s health.

“He just kind of kept going” and refused to take a step back, Weiser said.

That tendency followed Kill as he moved up to Southern Illinois University, a Foot­ball Championship Subdivision program.

Weiser said then-SIU athletics director Paul Kowalczyk reached out to him about hiring Kill in 2001.

“We knew he had a condition, and that was about it,” Kowalczyk said. “His positive qualities and everything he brought to the table certainly outweighed any issues he had with his health.”

“The program hadn’t won in years,” Kowalczyk said. “From A to Z, the program needed some stewardship and leadership, and Jerry provided that.”

In two years, Kill transformed South­ern Illinois from a 10-loss team to a 10-win team, but his health got lost in the success.

Kill had a seizure during the 2002 sea­son, but his first on-field seizure at SIU was in October 2005.

University of Minnesota professor Ilo Leppik specializes in epilepsy and said when someone has a seizure, they have no control over their body and are unaware of their surroundings.

“It’s something that a person with epilepsy has to worry about every day be­cause they may not know when the next seizure is coming,” Leppik said.

Kill said his seizures might have started in college, but he didn’t point to an exact date. The seizures escalated after he was di­agnosed with kidney cancer in 2005, a dis­covery prompted by the on-field seizure at Southern Illinois.

“They told him he could have his sur­gery after the whole season,” she said. “[Football] kept him going. It kept him positive.”

“We weren’t sitting around saying, ‘I wonder if coach is going to get through this,’” he said.

Kowalczyk said Kill had a few seizures while they worked together at SIU but they didn’t happen as often as they do now.

Mario Moccia took over for Kowalczyk as athletics director in 2006, and he said Kill had only one seizure while they worked together.

“He actually recuperated that weekend and flew to the next game,” Moccia said. “He was fully back the next week.”

Kill turned SIU into an FCS champion­ship contender amid his seizures, and a Di­vision I football program five hours north took notice.

At the helm for the Huskies: Jerry Kill.

Kill took over for retiring coach Joe No­vak at NIU after the 2007 season. The next three years brought three bowl games and an unspecified number of seizures.

Throughout his career, Kill has culti­vated a strong coaching staff that steps up when his health interferes, but players don’t always know the full picture.

“It was definitely very scary,” former NIU quarterback Chandler Harnish said. “It was also a confusing time because we were never given a whole lot of information as players.”

Jordan Delegal played under Kill in 2009 and 2010 and said when he came to cam­pus, he didn’t know anything about Kill’s medical condition.

“We had one game [in which] he had a seizure,” he said. “I was scared because I never knew of it.”

Delegal sensed that the seizures hap­pened regularly, based on the way assistant coaches and others within the program, in­cluding Kill, responded.

“Everybody has things in life that they go through. Football is our escape,” Dele­gal said. “As long as he stays around the game, the better he’s going to be.”

Toledo defensive coordinator Tom Ma­tukewicz coached under Kill for more than 10 years. He said he was first aware of the seizures at Emporia State.

Coaches knew about the seizures and weren’t surprised when they happened, Matukewicz said.

“That shows what kind of coaches he surrounds himself with, because in case of emergency, the ship doesn’t stop sailing,” Delegal said.

Kill’s Huskies finished the 2010 season 10- 3. He left before their bowl game to take over the Gophers’ struggling football program.

The Gophers finished the year 3-9, des­perately needing a culture change.

He started at Minnesota with the same fi­ery mentality that got him to the Big Ten, but five game-day seizures and extensive media coverage have forced him to adjust the way he approaches epilepsy and coaching.

“When you’re at Emporia, nobody knows [about the seizures] at that kind of me­dia market,” Matukewicz said. “Southern was the same way. Northern, too.”

“It’s a Big Ten football job … and it be­comes more of a national story,” he said. “You’re under the microscope.”

Former Gophers athletics director Joel Maturi said when he considered Kill for the job, he was more concerned with Kill’s can­cer history than his seizures.

“The last thing I wanted was to have somebody come here and have their cancer come back and die in two years,” Maturi said. “I spent more time trying to figure out his health from his cancer standpoint than I did from his epilepsy.”

But two games into Kill’s first season with the Gophers, epilepsy caught Maturi’s attention. He was standing beside Kill dur­ing his seizure Sept. 10, 2011.

Maturi said the seizure was frightening and “tough to watch.” He saw many more at the hospital during the next few days.

“If I were to hire him today, I’d be more concerned about the epilepsy than the can­cer,” he said.

Former Gophers linebacker Ryan Grant played two seasons under Kill and was also on the sideline when Kill collapsed.

“It was definitely probably the weirdest football experience I’ve ever had in my life,” Grant said.

Throughout the ensuing media storm and subsequent seizures, Kill began to come to terms with his epilepsy.

At first, he referred to it as a seizure disor­der. But that changed last year at a gala held by the Epilepsy Foundation of Minnesota.

He listened to powerful testimony by other attendees with the condition and was inspired to share his own story.

Kill has become a hero for many with epilepsy and a spokesman for the condition. He said he receives at least 10 to 12 emails per day and some handwritten letters.

Rebecca Kill said the couple has em­braced that role, and they are trying to raise awareness of the condition.

One in 10 people will have a seizure in their lifetime, and one in 26 will develop epilepsy, according to the Epilepsy Founda­tion of Minnesota.

During his time at Minnesota, Kill has changed various aspects of his life in an at­tempt to deter seizures. He said he was in the best shape of his life this summer, but it wasn’t enough.

Seizures forced him to miss an entire game for the first time in his career Oct. 5, when Minnesota played at Michigan.

Senior safety Brock Vereen has been on the team for all of Kill’s seizures and said that the first time, during his sophomore year, was “scary.”

“I knew that’s how the freshmen prob­ably felt for the first time seeing it,” he said. “So the older guys were really helpful as far as explaining to the younger guys how the process will go.”

Less than a week after Kill missed the Michigan game, Teague and Claeys an­nounced Kill would be taking a step back from coaching to seek additional treatment.

“[I’ve] never taken time off much, [and I’ve just] focused on going 100 miles per hour to turn programs around,” Kill said. “And at the end of the day, it caught up with me.”

There are two types of epilepsy inter­vention — brain surgery and medication. Both Teague and Claeys have mentioned Kill has tinkered with different prescription combinations this season.

Teague said he’s “not sure” how many seizures Kill has had during his 16 months as athletics director.

“I don’t ask him to tell me when he has a seizure, and I don’t expect him to do so,” Teague said.

Kill has gradually returned to coaching, but he’s delegating responsibility to his as­sistant coaches more than ever.

“It allows me to make sure I don’t have a setback,” Kill said. “I’m moving forward for the first time in a long time.”

So is the football team.

Minnesota is set to battle rival Wiscon­sin this Saturday in one of the most highly anticipated games in a decade.

“He’s obviously been the right short-term coach,” Maturi said. “Now, can he be the right long-term coach? That’s depen­dent on his health, and that’s dependent upon his success.”