No. 1 Minnesota splits weekend series vs No. 10 Minnesota-Duluth

The Gophers lost during 3-on-3 overtime on Friday but rebounded Saturday to split the series. 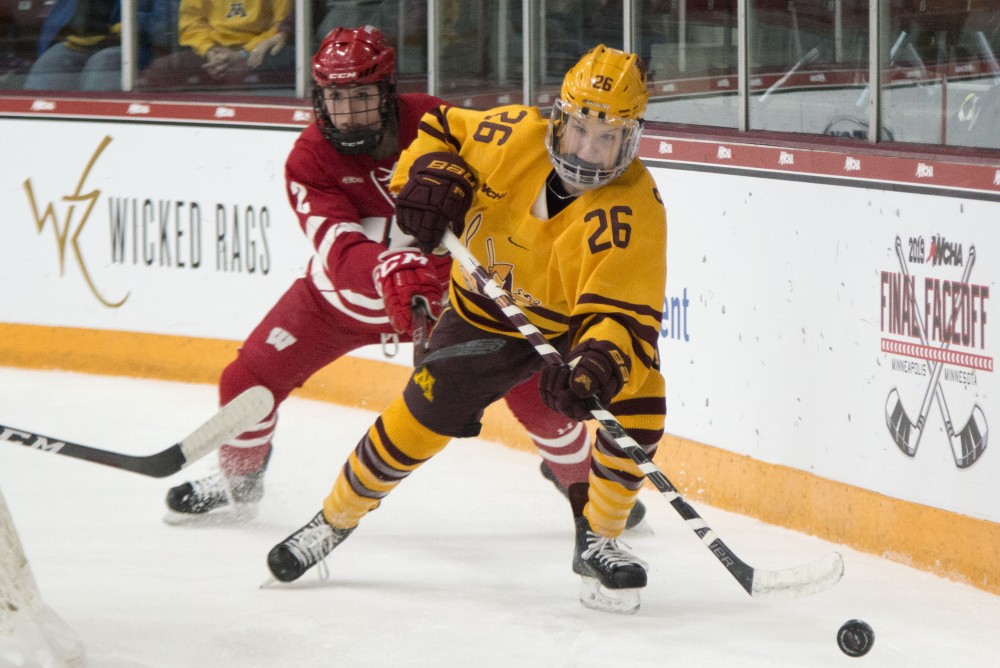 Forward Sarah Potomak chases after the puck at Ridder Arena on Sunday, March 10, 2019.

The Gophers went up north this weekend to face off against their in-state rivals, the Minnesota-Duluth Bulldogs. The Gophers lost in a three-on-three overtime battle on Friday but came out victorious on Saturday, splitting the series.

Friday’s game started out as a stalemate between both squads as neither team managed to score during the first period. Yet, in the second period, both teams caught fire offensively. Duluth forward Anna Klein scored first and put the Bulldogs up 1-0 at the beginning of the period. Not long after, sophomore forward and fellow former Edina High School graduate Emily Oden tied the game at 1-1 for the Gophers. The two teams would score another goal each to end the period tied at two.

The third period proved to be another defensive duel as neither team got anything working offensively, leaving the score deadlocked at two going into overtime. The first overtime period also did not give enough time for either team to get the win, but senior defenseman Jalyn Elmes found the back of the net during the three-on-three portion of overtime scored to give the Bulldogs a half-point boost in the WCHA standings.

“It was a really good hockey game here tonight,” Gophers head coach Brad Frost said after the game. “Two very good teams just laying it on the line — I thought both goaltenders were tremendous. Our team got better as the game went on. We had some great chances at the end of the third and in both overtimes. Unfortunately, we didn’t get that extra point, but all-in-all, a real good effort and we’ll get back at it again tomorrow.”

Gophers return to their winning ways, topping the Bulldogs 4-3

After not coming away with a win for only the third time all season, the Gophers responded quickly on Saturday, jumping out to a lead thanks to a Sarah Potomak goal. The Gophers never looked back from there, besting Duluth 4-3.

The Gophers held the Bulldogs scoreless throughout the rest of the period and the score was in the Gophers favor 1-0 at the end of the first period.

During the second period, sophomore forward Catie Skaja scored two goals to help boost the Gophers lead. The Bulldogs also put a pair of pucks through the net as well, but with a goal by junior forward Grace Zumwinkle before the end of the period, the Gophers had a 4-2 lead. Given the defensive success of both teams, a two-goal deficit seemed like a mountain to climb for Minnesota-Duluth going into the final period. It turned out to be too big of a challenge, and the Gophers held on for a 4-3 win three hours north of Minneapolis.

“Another great battle between two top-10 teams,” Frost told the media. “I’m really proud of how our team responded here today. We got to the net a little better and defended a little better. Overall it was a really good weekend, a tough weekend, on the road against a good Duluth team. We’re happy with the win here tonight, and we’re looking forward to getting off to Nashville next week.”

It’ll be a fun weekend in Nashville next weekend, where the Gophers will play two games against two top ten teams in the No. 6 Boston College Eagles on Friday and the No. 9 Harvard Crimson on Saturday.