On Monday, the Humphrey School of Public Affairs held a debate for DFL candidates running in the House 60B race. 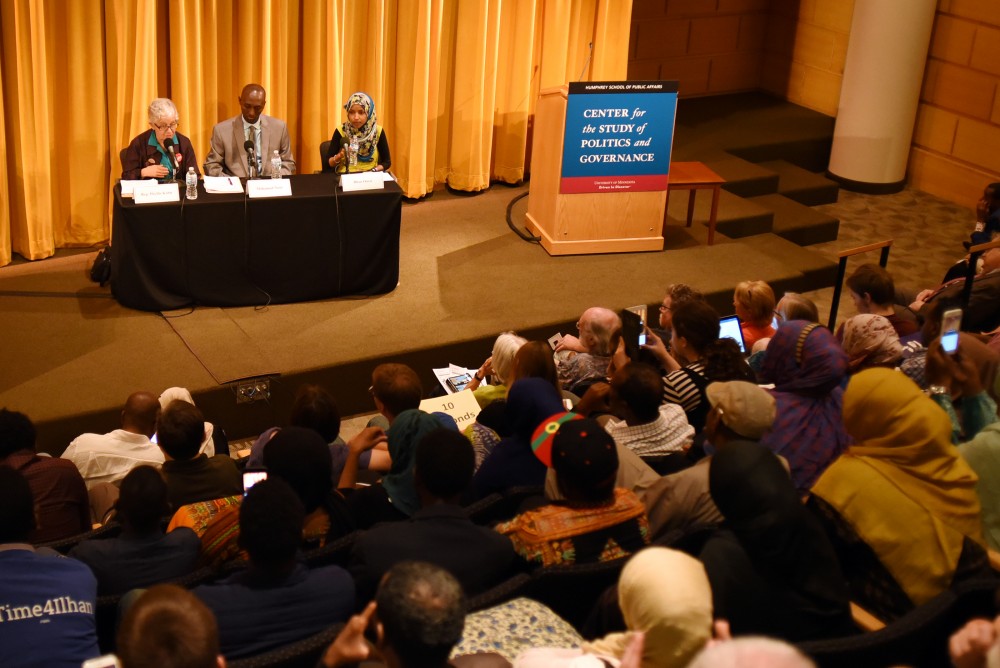 Minnesota Rep. Phyllis Kahn, Mohamud Noor and Ilhan Omar debate in a filled Cowles Auditorium at the Humphrey School of Public Affairs Monday evening. The three are competing for the DFL primary for House Seat 60B.

Local residents filled every seat in an auditorium at a Monday debate between longtime Minnesota Rep. Phyllis Kahn, DFL-Minneapolis, and her two DFL competitors, Ilhan Omar and Mohamud Noor.

The debate, held at the University of Minnesota’s Humphrey School of Public Affairs, drew discussion of local and state issues ahead of the district’s Aug. 9 primary. The winner of the vote will determine which candidate will be on November’s general election ballot.

If either Noor or Omar are elected, they would be the first Somali-American member of the Minnesota Legislature. Kahn, elected in 1972, is tied as the longest-serving current legislator in Minnesota.

Issues discussed by candidates for the House District 60B — which covers the University of Minnesota’s East and West Bank campuses, Cedar-Riverside, Prospect Park and parts of the Southeast Como neighborhoods — included higher education affordability, recent police-involved shootings, racial income disparities and other topics.

Noor, executive director of the Confederation of Somali Community in Minnesota, said recent local police shootings have cast a “dark spot” over the state, adding action must be taken.

“We need to prosecute the police who shot Philando [Castile] — who shot Jamar Clark,” he said.

One way to help policing, Noor said, is to recruit officers who understand the communities they work in.

Kahn agreed and said she asked to have a bill introduced that would cut down on the number of police traffic stops.

To address income disparities, Omar said she favors a $15-an-hour minimum wage, which Kahn and Noor both said they supported.

“Let’s give people skills for the jobs that are needed,” he said.

An issue that drew the attention of the candidates was higher education costs and how to help students with debt.

After the debate, Kahn said she’d continue to push for a mutual fund tax as well as expanding pre-college education options so more students can take free college credits in high school.

Kahn, whose college was paid for because of her science background, said people in that field are now struggling with tuition costs too.

As the debate wrapped up, each candidate argued why they should represent the district.

Noor said he’d bring new perspective and ideas to a district he’s wanted to serve since “day one.”

“I’m ready to serve this district,” he said.

Omar discussed what she’d do if elected, including fixing the education system, helping relieve college debt and reforming the police and criminal justice systems.

“Today you have a choice to invest in the next two years and not look back at voting with familiarity and complacency,” she said. “The time is now.”

Kahn cited past legislative accomplishments and her familiarity with a state she’s represented for more than 40 years.

“I know this state; I know the things that I work on, and I would like to continue doing it,” she said.

Supporters of the candidates and policy experts expressed varying opinions on the importance of an experienced legislator.

“It’s time for new blood, and it’s time for someone who can really represent the district with the due diligence that they deserve,” she said.

“Ilhan’s campaign was built from the ground up … and built her platform based off of what constituents were talking about,” she said.

Sen. Richard Cohen, DFL-St. Paul, said Kahn has an advantage as a senior member of the Legislature. He said this gives her the influence and respect to accomplish what she wants.

Cohen said if the DFL regains a majority in the House, Kahn will have even more influence because of her position.

But if Democrats fail to secure the majority, Cohen said a new legislator may struggle.

“A freshman legislator in the minority tends to not get a lot accomplished,” he said.

Larry Jacobs, director of the University’s Center for the Study of Politics and Governance and moderator of Monday’s debate, said he thinks Kahn’s long-term incumbency helps her chances.

“People have been voting for her for decades,” he said. “They’re in the habit of voting for Phyllis Kahn knowing that she’s someone they can trust.”

“She came very close to winning the endorsement at the district convention, which is impressive given the fact that she’s up against such a well-known incumbent,” he said.

Jacobs said Omar’s ability to rally the Somali community and broaden her appeal to students has helped her challenge Kahn.

“I think Ilhan is the biggest challenge that Phyllis Kahn has faced,” he said. “When you look at the vote at the district convention, Ilhan had more support than Phyllis Kahn.”

“He’s really not been able to build his base in the way Ilhan has, so … I think he’s lost momentum,” he said.

In an April statement, Warsame endorsed Noor and said he’s the best candidate to tackle the district’s challenges.

“He’s proven himself as extremely effective, extremely capable and willing to work collaboratively to bring substantive progress,” Warsame said in the statement.

While Noor’s campaign has discussed important issues, the race is mainly between Kahn and Omar, Stangler said.

“In my experience, working with voters and contacting voters, that’s who people are talking about,” she said. “Those are the two frontrunners.”