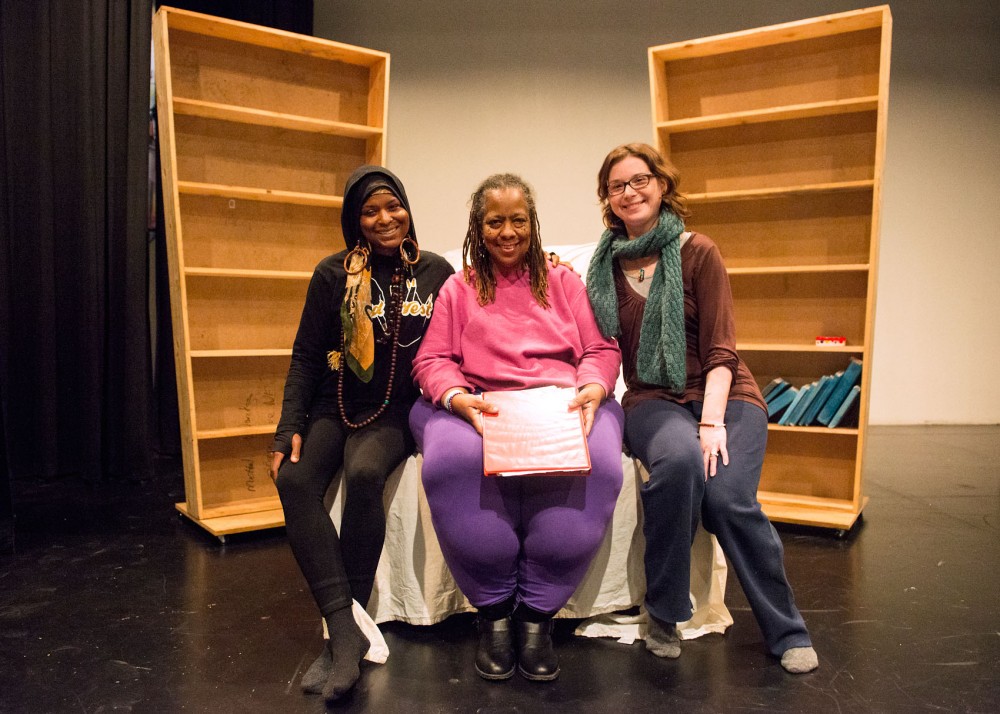 Left to right, director Nicole M. Smith, writer Amoke Kubat and actress Jennifer Johnson pose for portraits at Intermedia Arts on Wednesday, where their upcoming show "ANGRY BLACK WOMAN and Well Intentioned White Girl" will be put on this Saturday.

Jared Hemming
Amoke Kubat is the titular angry black woman in her new play “ANGRY BLACK WOMAN and Well Intentioned White Girl” — but she didn’t start out that way.
Kubat found inspiration for the piece after a community meeting in North Minneapolis, where other participants labeled her contributions to the conversation as “angry.”
“I said, ‘I’m not angry; I’m frustrated,’ ” Kubat said. “By the time the conversation ended, I was angry.”
Kubat channeled her frustration with being misunderstood into “ANGRY,” her first play, which will debut at Intermedia Arts on Saturday.
Though the piece began as a way for Kubat to express her rage against the “angry black woman” stereotype, it quickly grew more inclusive.
Working with actor Jennifer Johnson and director Nicole M. Smith as well as collaborators Mankwe N’dosi, Danielle M’Kali, Adaobi Okolue, Erika Thorne and Irna Landstrum, Kubat explores the different dynamics between black and white women in America with the play.
Kubat said she learned a lot from collaborating with different women on the piece, especially how the stereotypical “well-intentioned white girl” parallels other generalized cliches about women.
“Getting the women together was the first step,” Kubat said. “I feel, as a black woman, that you can’t speak for me. I can’t speak for a white woman — I’ve never been a white woman and never will be. I can only know my experiences in my interactions with white women.”
Kubat also realized that distrust is the root of many issues between black and white women, especially in Minnesota.
“I learned that black women did not trust white women as allies in sisterhood,” Kubat said. “The umbrella of ‘Minnesota nice’ is very racist, classist. It’s an umbrella of perceived niceness that really isn’t happening.”
In performance, “ANGRY” touches on these tensions through ghosts — characters that embody Kubat’s frustration through symbolism.
One ghost in the play, The Ghost of Wonder Bread, uses the white bread innovation as a symbol to explain how white immigrants became white.
Kubat asserts that just how bread abandons its colorization to become Wonder Bread, so did immigrants abandon their identities to become white Americans.
“It’s a symbol of modernization,” Kubat said. “[Immigrants] gave up their language, their customs. They gave up everything that made them other. People that couldn’t do that were dark-skinned people, Native Americans and blacks.”
The play ends with the white girl finding her own Irish roots, dismantling the concept of race by realizing that she herself is an immigrant.
Though the play doesn’t answer any questions provoked by race, it ends on a note of mutual understanding between the black woman and the white woman.
“They end up on some solid ground, realizing that it’s the same struggle,” Kubat said. “There’s a possibility of being allies in sisterhood.”
“ANGRY BLACK WOMAN and Well Inentioned White Girl”
Where 2822 S. Lyndale Ave., Minneapolis
When 2 p.m. and 7:30 p.m. Saturday
Cost Sold Out
Delete Image
Align Left
Align Center
Align Right
Align Left
Align Center
Delete Heading