Minnesota won the first game 5-1 and the second game 8-2. 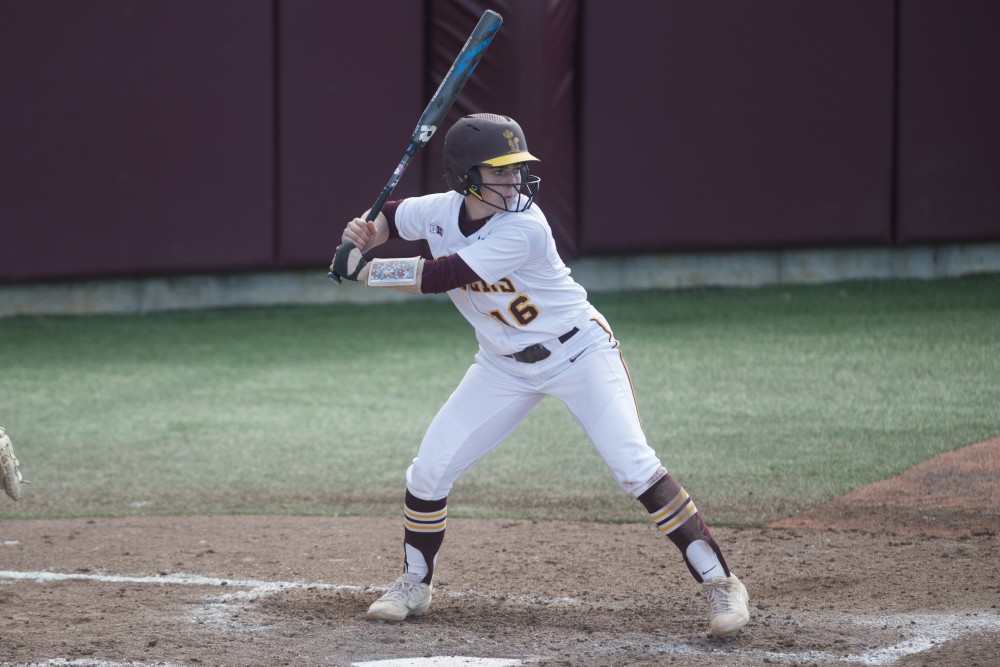 On a cold, Sunday afternoon at Jane Sage Cowles Stadium, the Gophers entertained the home crowd with 13 runs in a Big Ten doubleheader.

“Anytime you can put up runs in five of six innings that you play, you’re going to have a good chance to win that game,” Trachsel said. “That’s a collective effort by the offense.”

Minnesota used a four-run fifth inning to knock off Purdue, winning game one of the doubleheader 5-1.

Purdue third baseman Jenny Behan gave the Boilermakers an early lead in the first inning. Behan’s 12th double of the season made it 1-0.

The Gophers responded in the fourth when Brandner smashed her eighth home run of the season off Boilermakers pitcher Sydney Bates, tying the game at one.

Pitcher Sydney Smith worked her way out of a jam in the fifth inning. After allowing two walks and a single, Smith forced two fielder’s choices to end the inning.

Chell said her job is to put pressure on opposing pitchers and defenses.

“I always want to make a pitcher uncomfortable,” Chell said. “By putting up runs, it does. More than anything, it’s about the other person behind me.”

Smith won her eighth game of the season, allowing one run and four hits while striking out seven.

In the first inning of the second game, first baseman Hope Brandner smacked her ninth home run of the season and second of the day, giving Minnesota a 1-0 lead. The ball hit the Jane Sage Cowles Stadium scoreboard and bounced back into play, but it was called a home run.

Brandner said she saw the ball well on Sunday.

“We’ve practiced a lot on sitting on the changeup,” Brandner said. “Sitting back and waiting for my pitch was key this weekend.”

Down 4-0 in the fifth inning, Purdue first baseman Lexi Huffman cut Minnesota’s lead to 4-2 when she hit a double off the left field wall. Huffman’s two-run double was her 12th of the season. That was all the offense the Boilermakers mustered.

Natalie DenHartog crushed a three-run home run to deep center field, extending Minnesota’s lead to 8-2. It was DenHartog’s 11th of the season.

Trachsel said Smith and Fiser both gave Minnesota a chance to win.

“[Smith] got better as the game went on, big pitches in big moments, especially with the bases loaded,” she said. “Fiser’s giving us a chance to win the game. She’s working through some things, throwing well enough for us to control their offense and win the game. There’s not much more than you can ask for from your pitchers. We keep getting better through the season.”

Trachsel said the Gophers will focus on themselves before preparing to play to the Fighting Illini.

“We’re still a relatively young team,” she said. “We take the information from the opponents that we’re playing, but that is coupled with the things that we can control and the things that we know we need to work on. It’ll always be Minnesota first and then mixing in our scouting reports on opponents. That’s how we’ll attack this week.”