The new method is faster, easier and less expensive than previous ones. 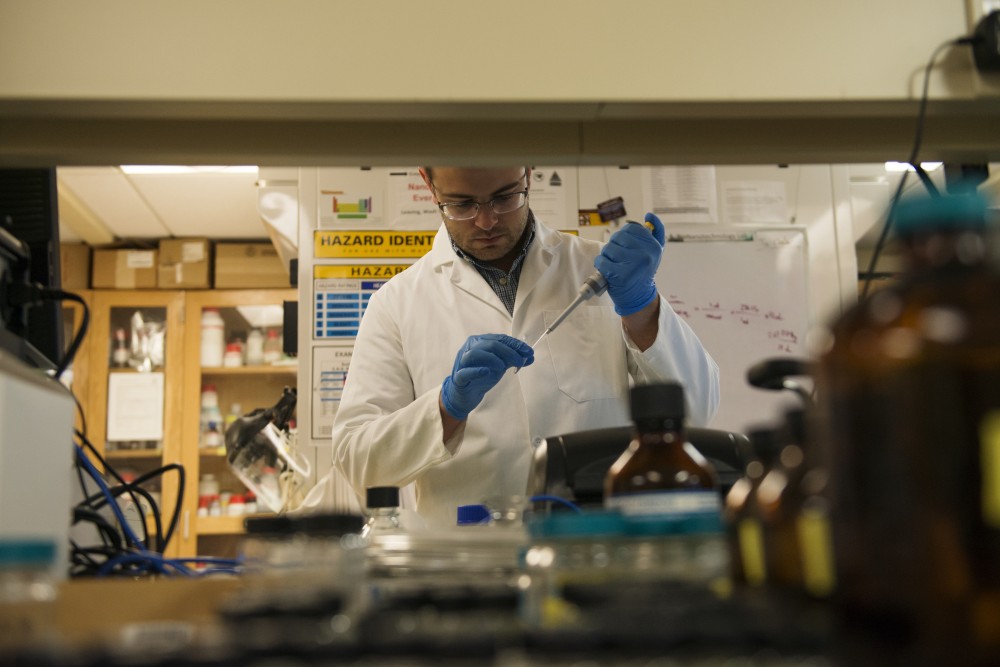 Graduate research assistant John Brockgreitens, who is working on a test that finds bacteria in food, works in a lab on the Saint Paul Campus on Tuesday, October 2. The research was created in response to recent food borne illness outbreaks in the United States.

University of Minnesota researchers developed a method for detecting bacteria in an effort to solve long-existing problems with food safety and waste.

As part of ongoing University research, the new method uses a handheld device to reduce the time needed to detect and identify microorganisms to under an hour, solving issues caused by previous, slower methods.

“There is a [food] safety risk when you make a product and you don’t have time to make sure it’s actually safe [before products go into the market],” said Abdennour Abbas, assistant professor in the University’s Department of Bioproducts and Biosystems Engineering who led groups of students and researchers on the project.

Their research was published in April, and researchers said they hope to commercialize and mass-produce the detector within a few years.

Methods used for bacteria detection have remained unchanged for the past 40 years, Abbas said. These methods are time consuming, expensive and require special training and lab equipment.

The new detection method finds microorganisms in a sample, then identifies whether there is a specific pathogen in the sample that causes diseases, Abbas said.

Once it is ready for sale, the device will be portable and easy enough to use for people who are not trained professionals, he said.

“The gold nanoparticles can have color-changing reactions in the presence of cells … so we developed a different type of sensor that uses a triangular gold nanoparticle,” said John Brockgreitens, a graduate student with the research team. “These things are very small and they can react with luminol … producing a glowing reaction.” Researchers are now trying to develop a technology which will use the same method to test samples for scientific experiments in the agriculture, healthcare and pharmaceutical industries.

“Once you have [this method] you can apply it to any field … [It’s] some kind of a universal method,” Abbas said.

With the new method, researchers are able more efficiently detect MRSA, a bacteria that causes more than 11,000 deaths each year in the U.S.

“[The detection] is not useful if you can detect a million cells because somebody’s already sick … you want to be able to detect one cell or 10 cells … before you actually have a contamination,” Brockgreitens said.

David Baumler, professor of Molecular Food Safety Microbiology at the University, said researchers in his lab still depend on traditional methods of bacteria detection rather than using the new method.

The research was initially requested by Schwan’s Company, which offers graduate fellowships for food safety research at the University.

Abbas said that this type of cooperation is important even though it doesn’t always happen in the research field. “It’s … something that should be more common,” Abbas said.