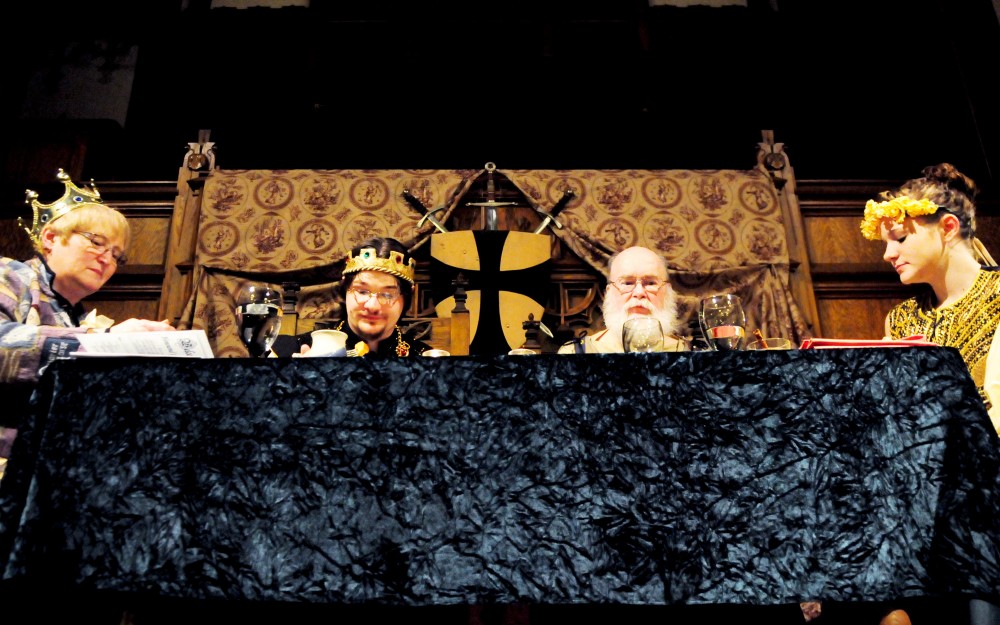 From left to right, Christi Nelson, Jonathon Lubke, Jim Ross, and Bethany Bourgoin eat at the University Baptist Church’s Madrigal Dinner on Saturday. The event was put on by the church in hopes of raising money for a new grand piano.

As guests entered the castle, stepping out of the 21st century, they took their seats at their assigned tables, all adorned with goblets and set for a feast. Outfitted in corsets and medieval cloaks, members of the University Baptist Church hosted their first-ever Madrigal dinner Friday and Saturday evening in hopes of raising money for a new piano. Doug Donley, pastor at UBC, said the church has always enjoyed putting on productions, and when the idea came up to put on a Renaissance-themed dinner theater play as a fundraiser, many members of the congregation jumped on board. The event was created through collaboration between the church choir, which sang English Madrigal-style Christmas carols, and members who volunteered as actors. The production involved 35 people. In the production, theater arts senior Mike Lubke played an actor who was summoned to put on a show for the King. A lifelong member of the church, Lubke joined his mother as a part of the production and said performing in a church production was a good change from theater classes at the University of Minnesota. âÄúThis is how people who arenâÄôt into [acting] theory do acting and itâÄôs refreshing,âÄù he said. The play aimed to entertain its audiences of around 60 both Friday and Saturday nights, and all of the money from ticket sales will help replace the $13,000 the church recently spent on a Petrof grand piano. The church, which prides itself on its music program, had to replace a broken piano earlier this year, Lubke said. âÄúItâÄôs nice to have the instruments match the quality of the performers now,âÄù he said. But even if there wasnâÄôt a cause behind the dinner, Donley said itâÄôs fun to put an event on like this for the community. âÄúItâÄôs Monty Python meets Shakespeare, meets Braveheart with less blood, better food and music,âÄù he said. Guests were served Wassail âÄì a Renaissance age spiced cider, English pea salad, beef stew or vegetarian stew in a bread bowl and bread pudding for dessert, all catered by the Purple Onion CafÃ©. Carrie Lubke of St. Paul said beyond having a great dinner, she came to support her family members in the show, like her brother-in-law Mike Lubke. Dressing up in Renaissance attire seems to get people excited, Carrie Lubke said. âÄúPeople like to get away with showing that much cleavage,âÄù she said. âÄúAnd men like being able to use swords.âÄù Although Carrie Lubke thought the fundraiser was a good idea, she said this year may not do more than cover the expenses of buying the supplies to put the dinner and show on, but it has the potential to grow in future years. Piano performance senior Tyler Wottrich used to be the church organist and said he was impressed with how authentic the church looked. âÄúI didnâÄôt quite know what it was going to be,âÄù he said. âÄúBut it was like walking back 500 years.âÄù Being the first year, Donley said he was pleased with the turnout. Mike Lubke said in the future he hopes more University students attend the event and arenâÄôt scared off by the fact itâÄôs held in a church setting. âÄúWeâÄôre using the space because we have it and it fits,âÄù he said. âÄúBut itâÄôs a show.âÄù Beyond raising money, Donley said he wanted the dinner to be a chance for the community to participate in a fun holiday kick-off activity. âÄúItâÄôs more than just the fundraising piece of it,âÄù he said. âÄúItâÄôs that the congregation and the whole community comes together to pull it off.âÄù