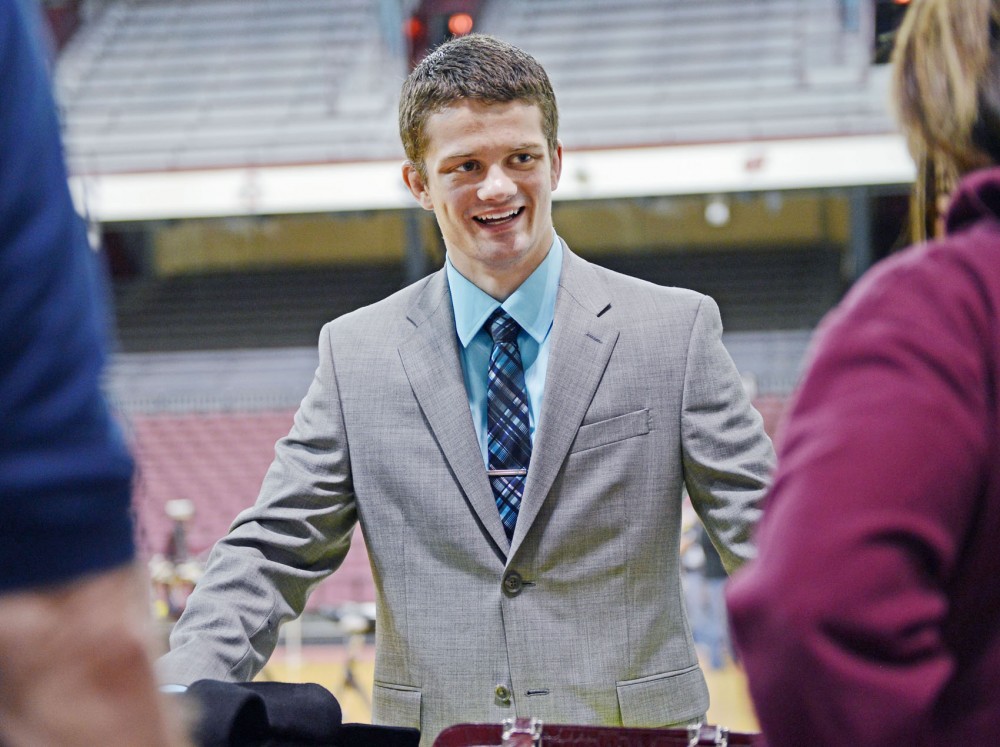 Former Gophers wrestling star Jayson Ness talks with MaryAnne Lange, mother of Gophers wrestler Seth Lange, after Minnesota's win over Northwestern on Friday at the Sports Pavilion. Ness won the NCAA title in 2010 and now serves as a volunteer assistant coach for the Gophers.

Jayson Ness sent a letter to J Robinson as a child that said he wanted to coach the Gophers.

It was a small gesture at the time, one that Ness wasn’t sure Minnesota’s wrestling coach would recognize.

“Yeah, I remember that letter,” Robinson said with a grin. “I sent him a shirt and some other stuff after that.”

Now, two years removed from his wrestling career at Minnesota, Ness has fulfilled his dream.

He exerted his dominance in a career that included a national championship, but he has since transitioned to a volunteer coach position for his alma mater.

“I’ve always wanted to be a college coach,” Ness said. “It’s kind of just a natural fit for me. I had an opportunity, and I would have been dumb not to take it.”

His passion to wrestle started at a young age. Ness first stepped on the mat as a kindergartener and fell in love with the sport.

“I saw a flier for [Bloomington Athletic Association] wrestling, and I thought it was professional, so I thought it’d be cool,” Ness said with a chuckle.

Dylan Ness said he and his brother would roughhouse as kids, which sparked a friendly rivalry between the two. Dylan Ness, the Gophers’ current wrestler at 149 pounds, said he would always try to pick fights with his older brother, but Jayson Ness didn’t really react.

“He was too nice,” Dylan Ness said, “but when I got annoying, he would squeeze me or … make me cry a little bit.”

Both Jayson and Dylan Ness wrestled at Bloomington-Kennedy High School, but the older brother made a name for the family first.

Jayson Ness was a two-time state champion in high school. He was a coveted prospect, but his college decision was easy.

Robinson said Jayson Ness always wanted to wrestle for the Gophers, and signing him was huge for the program.

Jayson Ness performed well in his first few years and then took the nation by storm in his senior season.

He was an All-American in each of his four seasons, but he didn’t lose a match as a senior, when he entered the season ranked No. 2 at 133 pounds.

“Usually hard work and being at the top go hand-in-hand,” Robinson said. “It was a combination of both, and he did great things.”

Ness capped his senior year with a national championship in dramatic fashion.

“With 20 seconds left I was down by two, so I’m just thinking I need a takedown — that’s all I need to go into overtime,” Ness told the Minnesota Daily after his win in March 2010. “I ended up getting it and putting him on his back.”

Ness got the takedown to tie the match at 4-4, and he was awarded two points for the near fall to win the match 6-4.

Dylan Ness watched as many of his brother’s college matches as he could and said he couldn’t sit still during the final.

“It was stressful,” he said. “I think I was more nervous than him sometimes. That last-second match in the final was really hard for me to watch and not freak out.”

Jayson Ness wrestled his entire undefeated campaign with a lower back injury.

He was able to overcome the pain in season, but it stopped his future plans. Ness said he had opportunities to make a run at the Olympics, but his back injury was too much to handle.

“I’m in pain everyday and … the more I wrestle, the more pain I’m in,” he said. “I couldn’t wrestle anymore, so I figured I would go the coaching route.”

Ness said the vertebrae in his lower back are too small and pinch his sciatic nerve.

The injury impeded his path to the Olympics, but that might have helped his career.

Ness assumed the role as a graduate assistant coach for the Gophers after he finished college. He moved up to a volunteer head coach a year later when former assistant coach Joe Russell left the program.

Ness helps coach individuals on a day-to-day basis, but he said he feels his biggest strength lies in the way he connects with members of the squad.

“I think there are more things I can relate [to],” Ness said, referring to being close in age to most of the athletes. “It’s even with dumb things like TV shows we watch.”

Robinson said Jayson Ness’ importance on the staff is deeper than his ability to discuss the latest television gossip.

He said Jayson Ness epitomizes excellence on the mat and hard work.

“There’s a huge difference in words, but there’s not in action,” Robinson said of Jayson Ness’ role change. “When you can show people what they have to do … that goes a long way, and that’s what Jayson brings to the team.”

Sophomore Seth Lange said guys on the team look up to Jayson Ness because of his success with the Gophers.

“He knows what it takes to be a national champ,” Lange said.

Lange has struggled at times this season, but he said Jayson Ness kept his spirits up.

Dylan Ness said he and his older brother keep the relationship of a brother and a coach separate.

Still, reality hits Dylan Ness every now and then.

“I never thought this would happen growing up,” he said. “It’s amazing to have my brother in my corner every match.”

Jayson Ness said one of the best moments in his short tenure as an assistant coach was being able to watch his brother in the NCAA final last season.

Dylan Ness lost in the final, but as a sophomore, he will have a few more chances at retribution in his career.

In the meantime, Jayson Ness will continue to coach in hopes of working his way to the top.

He might even want to become the head coach for the Gophers.

“I don’t really ever set anything in stone,” he said. “But I would like to stay here if I can do that.”

It’s not like Ness sent a childhood letter anywhere else.