Led by Pitts, No. 14 Minnesota rallies for win over Boston College

Destiny Pitts, the reigning Big Ten Freshman of the Year, scored a career high 35 points in the game. 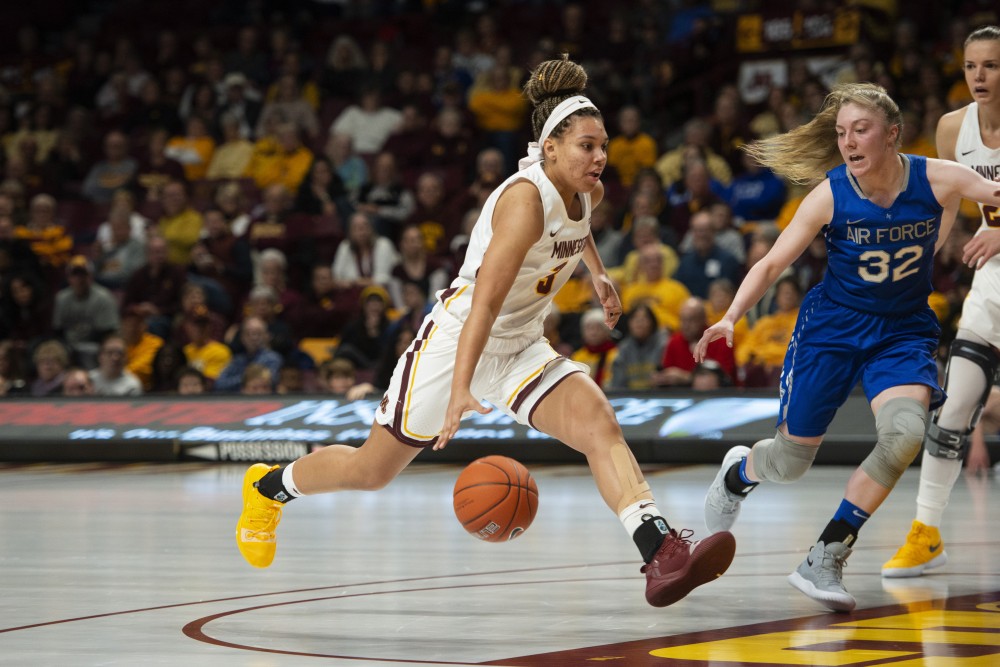 Sophomore Destiny Pitts runs toward the hoop on Sunday, Dec. 2 at Williams Arena. The Gophers beat the Air Force Falcons 67-50.

The Boston College Eagles (8-2) hung with the Minnesota women’s basketball team for much of the game on Sunday.

However, the Gophers weathered a third quarter surge from the Eagles to take a 77-69 victory.

Head Coach Lindsay Whalen had her team up by a score of 20-17 after the first quarter and Minnesota’s lead grew to seven points at the half, with a score of 36-29.

However, Boston College emerged re-energized in the third quarter and outscored the Gophers in that period 25-17.

Boston College led 54-53 entering the fourth quarter; but with just over seven minutes remaining, the Gophers went on an 11-0 run to close the game. The team also forced seven turnovers in that span.

Destiny Pitts was particularly valuable in the time frame, going 10-10 in free throws in the last 42 seconds to close out the game. She had a career-high 35 points overall in the game.

Jasmine Brunson added 11 points and five assists to the mix as well, while Annalese Lamke finished the game with 13 points.

With the victory, Minnesota got its second win this season over an ACC opponent. Earlier in the season, the Gophers beat the highly-ranked Syracuse Orange in a game at home.

Holding an undefeated 9-0 mark on the year, Minnesota hasn’t had a better start to a season since Whalen was a player for the Gophers. In 2003-04, Whalen’s senior season and Final Four campaign, the Gophers started the season 15-0.

Next, Minnesota returns home to play the Coppin State Eagles (0-7) in a game at Williams Arena on Wednesday.