Sean Bauer led the men’s team with a 15.1 on the still rings this weekend. 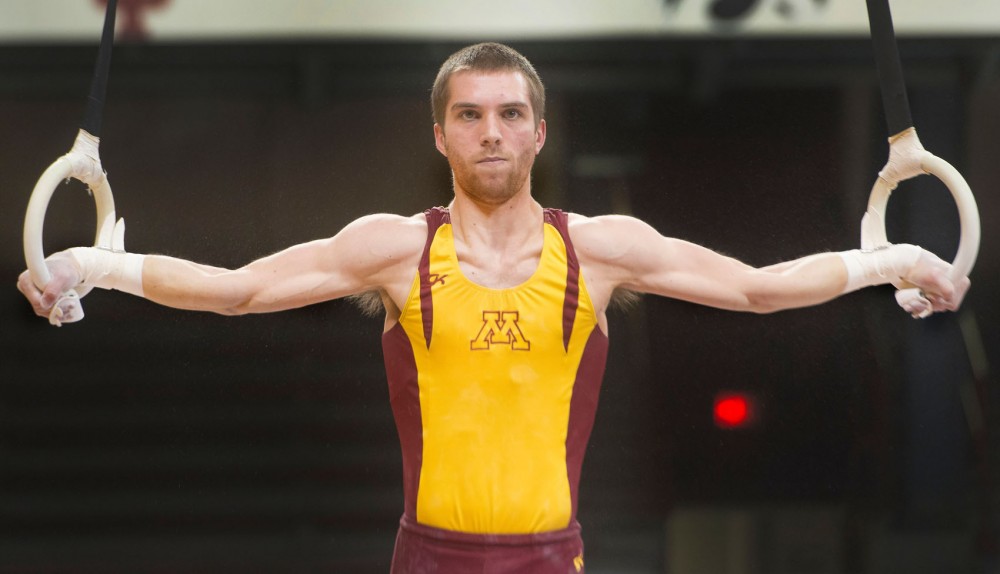 Senior Steffen Beck performs on the still rings on Saturday at the Sports Pavillion.

Apparently, no one told the Gophers.

Minnesota looked confident and unperturbed Saturday afternoon, when it went head-to-head with the Sooners.

“When you have the No. 1 team in the country come into town, it can be daunting,” said head coach Mike Burns. “You can be a little intimidated, but our guys didn’t get that way.”

The Gophers placed first in four of the meet’s six event categories, but Oklahoma still came out on top, 431.9-427.65.

Burns said he was proud to see his team rise up in the face of a challenge.

“It’s critical [to not be intimidated],” he said. “The whole key to success in sports is confidence and being able to focus. I think the confidence level is there.”

Gophers junior Sean Bauer led his team at the meet, highlighted by his 15.1 score on the still rings.

“It’s definitely something I’ll remember,” Bauer said. “I definitely want to take that as a stepping point to improve the routine, maybe get a harder start value.”

Bauer added he might “give [Squires] a run for his money” at the NCAA championships in a few months.

Taking a relaxed approach made all the difference in Bauer’s win, he said.

“My whole mindset was just, ‘Be confident,’” he said. “You can’t change anything that they’re going to do, but if you go out and have your best performance, you can’t be mad at the end of the day.”

The meet was supposed to include the University of Illinois at Chicago, but the team flight was cancelled due to high winds.

The red-hot Gophers came out firing in a meet that pitted conference foes against each other.

Though Illinois kept the competition close throughout the meet, Minnesota prevailed with a final score of 196.225-195.35.

“It was our best home meet of the season,” head coach Meg Stephenson said. “We wanted to come back and give the crowd a performance that was more like what we can accomplish [this season].”

If the Gophers’ performance Saturday was any indication of what they can accomplish this season, fans should be giddy.

Minnesota junior Kylie Schermann started off her sterling performance with a 9.9 on the vault and ended it with a 9.875 on the floor exercise.

“It was just going out there and living in the moment,” Schermann said. “We just tried to focus on ourselves … and trust in what we’ve trained for.”

Schermann shared team MVP honors with sophomore Lindsay Mable, who tied a school record with a 39.6 in the all-around competition.