Part of Islam Awareness Week, the event aimed to inform non-Muslims about the religion. 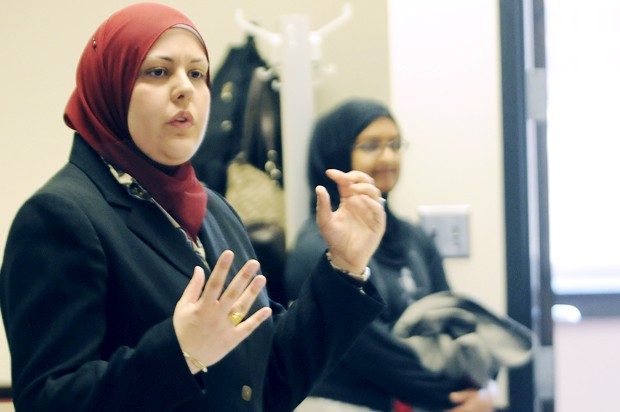 Attorney Imani Jaafar-Muhammed spoke Thursday about the roles of women in Islam and their misconceptions.

At a time when the western world is curious about Muslim women in Islam, Imani Jaafar-Mohammed spoke Thursday to people at Coffman Union about the issue. This is a very important issue to bring to the table, Jaafer-Mohammed said. âÄúThere is a misconception about Muslim women,âÄù she added. The speaker criticized some Westerners who charge all Muslims with the little information they have. âÄúYou cannot study a religion in a vacuum,âÄù she said. âÄúYou need to learn the history.âÄù After the Sept. 11 attacks, the Muslim Association Students started to hold Islam Awareness Week s to inform non-Muslims about the religion. The eighth-annual event, sponsored by the University of MinnesotaâÄôs Muslim Student Association and Al-Madinah Cultural Center, started last Friday at the University. The eventâÄôs theme for this year is contributing to U.S. national interests, with organizers seeking to reach non-Muslims. Jaafar-MohammedâÄôs discussion focused on the role of women in Islam. Jafaar-Mohammed, a Minnesota-based lawyer, said many in the West always talk about Muslims and IslamâÄôs acceptance of polygamy. She said the history is that when Prophet Mohammed was chosen for the people, people led difficult lives. Back then, they used to bury their daughters alive because they didnâÄôt want daughters. They used to possess more than 15 wives. That was how Arabs lived before Islam. But when Islam came, it prohibited the brutal system of Arab cultures and burying girls. It also reduced marriages to four wives. Still, she said marrying more than one wife is a choice, not a requirement. So, when men live in a country that accepts polygamy, they marry four if they can. But when they come to countries like the United States, they choose not to because Islam requires Muslims to follow rules set by those who came before them, she said. Jaafar-Mohammed also accused some people of not differentiating religion and culture. She said many observe an individual or a family doing something wrong and then associate that with the whole group. Muslim people also have cultures thay Islam might disagree with. Muslim women are required to cover their head, but it is a choice of how women would do it. For instance, a Muslim woman from Afghanistan would cover completely different from a Lebanese Muslim woman âÄî that is a cultural choice, not Islamic, Jaafar-Mohammed said. Though many say that Islam doesnâÄôt allow Muslim women to become leaders or become educated, Jaafer-Mohammed said she disagrees. She mentioned an instance where one of the Prophet MohammedâÄôs wives was a business woman who traveled from one place to another for her job. Also talking about education and leadership, Jaafer-Mohammed said when the prophet died, all Muslims came to his wife to help them with questions they didnâÄôt know themselves. These people included even men, she said. She also spoke about polygamy and what Islam says about it. She said it is a choice the husband can make. She even said in some cases polygamy is good for women. For instance, in Iraq, because of the war, there are more women than men. Many of them have many children and need someone to assist with the family needs. So, a wealthy man could marry four women, not to oppress but to help. Third-year graduate student Jame Faghnous, who coordinated the event, said the issue was important. âÄúMuslims have been accused of violating Muslim womenâÄôs rights,âÄù he said. There were many non-Muslims in the audience. âÄúI thought it was very interesting and made everyone feel comfortable,âÄù said child psychology senior Leah Oliver. âÄúThe more information people have, the less they can [stereotype].âÄù Education sophomore Saida Hassan said discussion helped show the way Muslims view women in Islam is different from the Western view of Muslim women, she said. Information technology infrastructure first-year Mohammed Hauif said he believes âÄúthe event was one of the best we had.âÄù Both Muslims and non-Muslims there learned a lot, he said. Though many liked the issue, others think the time was too short to cover it in full. Biology senior Asim Khan said, âÄúI wish we had more time than an hour.âÄù Microbiology sophomore Ibrahim Mohamed said it is important to inform the significance of women in Islam since many think Islamic women are oppressed. âÄúThe speaker of this issue is a perfect example of how important Muslim women are,âÄù he added.