Two offensive linemen transferred from the team prior to the season starting. 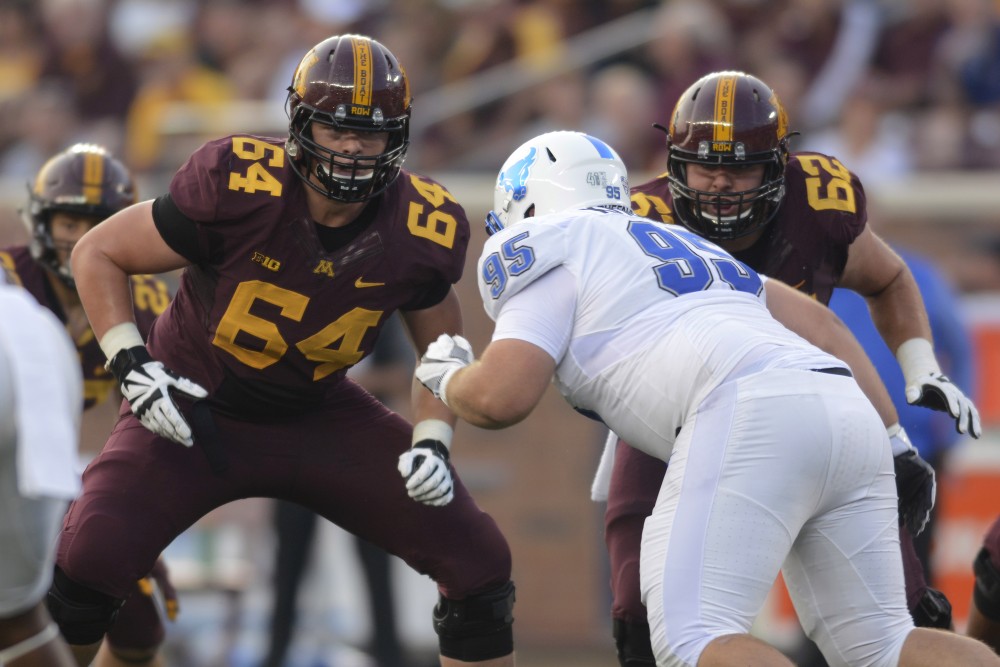 Only one Gophers offensive lineman that is currently with the team started in last season’s first game.

The ground game for Minnesota against Buffalo should have been the team’s strong point with the amount of returning running backs. Instead, the passing game was more prominent. The Gophers’ offensive line is developing towards stability to jump-start the run game.

“We can’t let the circumstances dictate our behavior,” said offensive coordinator Kirk Ciarrocca. “The issues that we have depth-wise up front, they are what they are, and there’s no excuses being made and we just [have] to keep getting better.”

The Gophers’ depth on the offensive line is something that has come into question in prior seasons as well.

From the first game of 2016 to the Holiday Bowl, the right side of the line stayed the same, but Garrison Wright came in to right guard, moving from left tackle where Donnell Greene took over in the game against Buffalo.

“Everyone is adjusting fine,” Greene said. “One person who has really [stood] out is Conner Olson. In spring, he played center the whole time, going into fall camp he was at left guard, and he started last week at right guard.”

Olson was redshirted last season, so he comes onto the team right into a starting role at right guard.

This season, the left side stayed the same, but big changes came on the right side, with Nick Connelly taking over, after Jonah Pirsig graduated, at right tackle. Olson took over at right guard with Vincent Calhoun playing special teams so far in 2017. Former guard Connor Mayes transferred from the team to TCU, and later quit football.

One of the biggest changes, though, comes in one of the most vital positions — center. After former center Tyler Moore transferred to Oklahoma State last offseason, the center position had to be filled, and Jared Weyler took it.

“Center, you have to make sure everyone’s on the same page,” Weyler said. “You make all the calls, and also everything happens a lot quicker because you’re closer up to the line of scrimmage. I’m getting my steps in the ground a lot quicker, and reacting to things a lot quicker compared to guard.”

Weyler said the most important part about the offensive line isn’t about the individual talent on the line, it is the cohesiveness of the five guys on the line to make the right blocks and not miss assignments.

The season is one week old, and the team still needs to deal with an offensive line consisting of players who are all in new positions.

Head coach P.J. Fleck said that the line is getting better, but still is not where it needs to be.

“A lot of inexperience stood out to me,” Fleck said. “Jared [Weyler hadn’t] even practiced with the football team until training camp … You’ve got a redshirt freshman up there, you’ve got guys that maybe play a little bit.”

Fleck said that the adjustment to the inexperience was a simpler game plan that allowed the quarterbacks to be successful and the offense as a whole to not make mistakes.

“As we continue to go, we will expand, and whatever the team can handle, we’ll give them,” Fleck said. “But that would be foolish of me to say … ‘Here’s the whole thing.’”