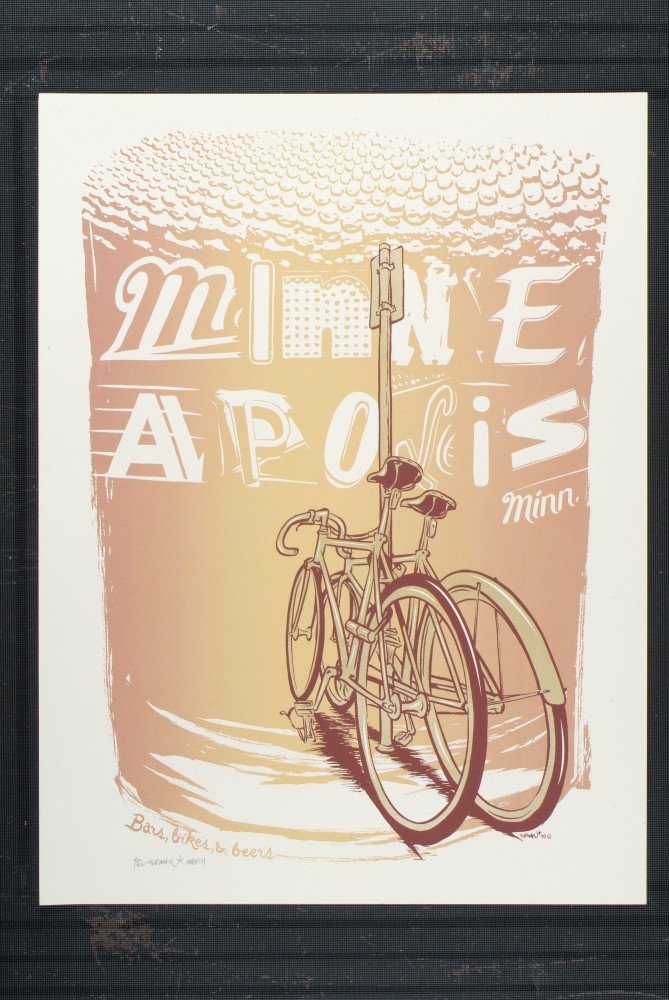 WHAT: ARTCRANK WHEN: April 4 – May 2 WHERE: One on One Bike Studio, 117 Washington Ave. N. (Also at Art-a-Whirl, Northeast Minneapolis, May 15 -17) Bike people are a solid bunch. ItâÄôs almost as if their tokens âÄî the strap-across bags, the fixed gears, an affinity for indie music and facial hair âÄî create a community of cyclists who celebrate their environmentally friendly lifestyle and flit past the rest of us in line for the bus, with the grace and ease only a vintage Schwinn can provide. Well, if hippies get a festival (the psychedelic-drug-friendly 10,000 Lakes Festival), and politicos get a festival (the RNC/DNC), then bikers should too, right? ThatâÄôs the thought of Charles Youel , a former advertising exec turned bike art curator for ARTCRANK, a bike art exhibit/party/community builder making new tire marks in the Twin Cities art scene. ARTCRANK is a laid-back event its curator describes as âÄúa poster party for bike people,âÄù so donâÄôt expect a bunch of black-clad art critics with pens poised like swords. ARTCRANK makes its home at One on One Bicycle Studio , a hybrid mash-up of coffee shop, bike shop and art gallery, with a loyal following amongst cyclists and regular dudes alike; even the guys from Franz Ferdinand love it. âÄúItâÄôs more than a bike shop,âÄù Youel said of the decision to set ARTCRANK at One on One. âÄúDowntown needs more businesses like this.âÄù Youel is a cyclist himself, though âÄúironically, not as much as before I started doing a show about bikes.âÄù The first event occurred in 2007 and the event has been so successful that ARTCRANKâÄôs Facebook page shows an ever-swelling guest list nearing 1,500. âÄúIt creates a community,âÄù Youel said. âÄúWe have 35 artists and their family and friends tend to create an audience. People bring their kids to the show, which wasnâÄôt my original intent, but itâÄôs so playful and fun it appeals to people of all ages.âÄù The artists, all from the Twin Cities area except for one from Madison, contributed posters of all sorts, ranging from a folded-up âÄúlove noteâÄù to her first bike from Natalie Schaefer to a poster of Jesus riding a bike from Brent Gale, one of the owners of Twin Six clothing company. Gale is a graphic designer who quit his job to join the bike world. âÄúARTCRANK is different than any other art show. ItâÄôs very relaxed,âÄù Youel said. âÄúItâÄôs not stuffy.âÄù Plus, unlike most other exhibits, the art hanging on the walls of One on One is affordable. Every piece is priced at $30 or less, so if that cycling Jesus is your thing, you can roll it up and take it home. The ARTCRANK aesthetic has been so successful that it has expanded its ride towards Denver and now possibly Atlanta, Seattle and San Francisco. Even Vancouver wants to get in on the fun. âÄúBasically any urban area where there is a good core population of cyclists,âÄù explained Youel. âÄúItâÄôs all about access. Everyone rides bikes.âÄù