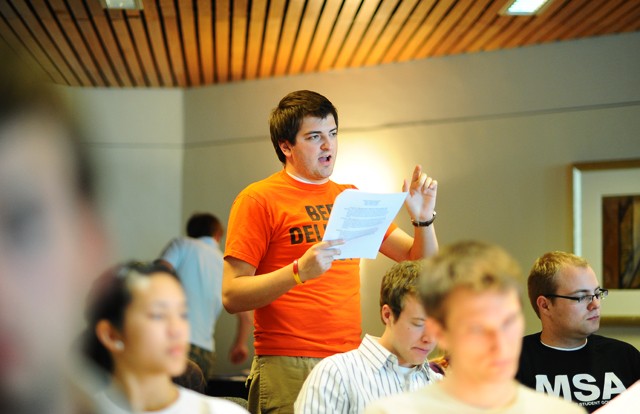 Paul Buchel speaks during the MSA meeting on Tuesday in the St. Paul Student Center.

Minnesota Student Association members used their annual forum, held Tuesday evening on the St. Paul campus, to move through a weighty agenda. The forum voted to pass a resolution that will establish a one-time Student Services Fees Committee task force and a bylaw change that will ease MSA representation requirements in future years. âÄúWe were all able to come together for this general consensus here,âÄù said MSA member Andrew Heairet about the task force. âÄúSo I think itâÄôs really important that we pass this and get this through and get this committee underway so we can straighten everything out for next year.âÄù The task force resolution was formed last Tuesday by an ad hoc committee, which had hoped to pass it before the semester ended to assure the group could finish its review over the summer. Plans are for the task force to present its recommendations at the beginning of the 2010-11 academic year. The resolution will now go to the Graduate and Professional Student Assembly before the task force can be formed. The resolution recommends a seven-member task force composed of: âÄîOne MSA appointee âÄîTwo GAPSA appointees âÄîOne Student Senate appointee âÄîPaul Freeman (student organizations committee chairman) âÄîKenny Kapphahn (administrative units chairman) âÄîSean Niemic (task force ad hoc committee chairman) The fees task force is the third in recent history at the University of Minnesota, the last being in 2005. 30 to 15 MSA also amended a bylaw Tuesday, which changed the requirement for student groups to gain representation at forum. Student groups needed 30 signatures from those who claim to be members of a group. The vote changed that requirement to 15. âÄúWe want to have at least one group on there to be representative of all the little groups in general, specifically special interest and hobby groups,âÄù Campus People Watchers President David Shaffer said. âÄúOftentimes our groups kind of get overlooked. Groups that are there for fun and not political action tend to get forgotten about.âÄù CPW, with nine other small student groups, met last week to voice complaints about their lack of recognition. The MSA bylaw change was the collectiveâÄôs first organized action aimed at increasing their influence on campus. âÄúThis is a progression,âÄù MSA member Paul Buchel said. âÄúI think three years ago it was actually at 50 and it was lowered to 30, and so this is just kind of a progression.âÄù MSA also passed two other resolutions Tuesday and a position statement supporting a change in Minneapolis zoning codes to more accurately reflect occupancy.