Bruininks echoes past in final address

In his final State of the University speech, the president praised the U’s fiscal responsibility. 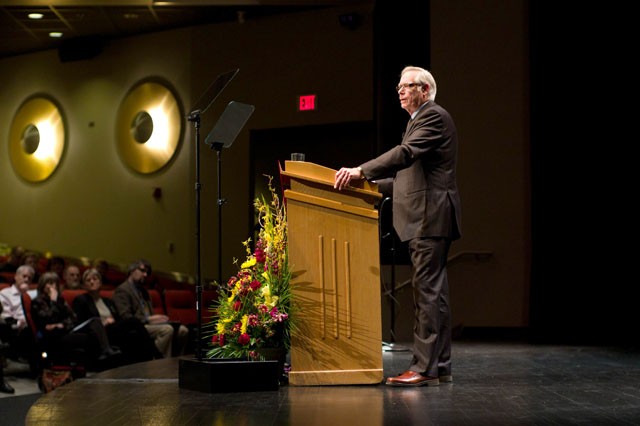 When University of Minnesota President Bob Bruininks gave his final State of the University speech, it echoed the tone from his first address nine years earlier âÄî a time he called the most challenging in the past two decades.
But last weekâÄôs message, delivered at Coffman Union Theater, was even more urgent.
With the University facing an uncertain financial future, Bruininks argued that his administration has made good on many of the goals he laid out in 2002.
Four-year undergraduate graduation rates have nearly doubled, retention rates increased, a record amount of money was raised for student financial aid and several new signature buildings appeared on campus âÄî including TCF Bank Stadium and the Science Teaching and Student Services building.
The UniversityâÄôs research enterprise is bustling, bringing in $823 million last year âÄî nearly 50 percent higher than 10 years ago.
But with the state facing a $5 billion budget deficit, Bruininks also took the opportunity to warn state legislators about the harm of further funding cuts to the University.
âÄúWe are approaching a tipping point at which disinvesting in the University will diminish academic quality and productivity,âÄù he said.
Bruininks was less optimistic than in 2002, when the state was grappling with a similar $3 billion budget deficit and the University again faced steep cuts.
âÄúThis University has faced difficult times in the past, and we have weathered them. We will weather these times as well,âÄù Bruininks said in his first address.
Although Bruininks touched on improving education in both speeches, neither addressed the role of the liberal arts, prompting Italian and French professor Susan Noakes to press Bruininks last week on how they fit into the future of the University.
Liberal arts are âÄúfundamentalâÄù to the UniversityâÄôs mission, Bruininks said, but their definition is changing.
The University needs to redefine how to best deliver those ideals in the 21st century, he said.
Both speeches promoted the UniversityâÄôs statewide impact, through its agricultural extension offices, role in educating MinnesotaâÄôs workforce and the billions of dollars of economic activity it generates.
Student senator Luke Nichols said he wasnâÄôt surprised by anything in BruininksâÄô final speech but was glad the president emphasized the UniversityâÄôs unique importance in the state.
âÄúItâÄôs a given,âÄù the environmental science junior said, âÄúbut itâÄôs something that needs to be asserted.âÄù
Bruininks, who will step down to return to the faculty June 30, said he has few regrets from his time as president. He said heâÄôs proud of how the University has seized new opportunities and responded effectively to the tough fiscal situations itâÄôs been dealt.
âÄúPeople ask, âÄòIs this sort of a bittersweet moment?âÄô
âÄúWell, no itâÄôs just a really sweet moment,âÄù he said. âÄúIâÄôm leaving feeling pretty good âÄ¦ about the accomplishments weâÄôve made.âÄù