Soccer advances to Sweet 16 after upset of Texas A&M 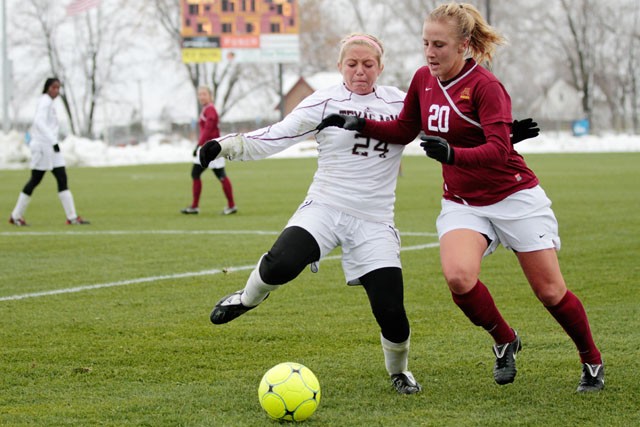 The 8,000 square yards of green might have been a mirage. With every other blade of grass in the metro area hidden beneath 10 inches of the seasonâÄôs first snowfall, here were a few million that were perfectly manicured, having been meticulously uncovered by a grounds crew that worked into the wee hours of Sunday morning to make the field playable at Elizabeth Lyle Robbie Stadium.

What followed seemed surreal at times, too. The Minnesota womenâÄôs soccer team dominated ninth-ranked Texas A&M, got an early goal off the head of junior left back Tamara Strahota and needed nothing else to advance to the Sweet 16 for the second time in three years.

Senior Katie Bethke scored her third in two games in the 76th minute to make it a 2-0 final, but the Aggies never truly threatened sophomore Cat ParkhillâÄôs goal. She comfortably saved all seven shots that she faced.

Moments after the final horn, the Gophers, still bursting with energy, ran to the far side of the field and broke off chunks of snow from the banks lining the stadium. What followed was their improvised version of a Gatorade shower: snowballs down the back for coaches and team managers alike.

It was a fitting celebration for a group of players accustomed to the vagaries of Minnesota weather and provided a stark contrast to a Texas A&M squad that head coach G Guerrieri said were âÄúfish out of water in this environment.âÄù Though his team was seeded, the NCAA tries to minimize the number of flights when selecting hosts for first and second round tournament games. Since Creighton and North Dakota State are within driving distance of the Twin Cities, the Aggies forfeited home field advantage.

âÄúItâÄôs tough to come in and play a really solid team like Minnesota in such foreign conditions to us,âÄù Guerrieri said.

The cold and the crowd may have been foreign, but the game was still soccer âÄî Minnesota just played it better. Yes, the Gophers were more comfortable with the weather (Bethke didnâÄôt wear sleeves or gloves), but they were also more comfortable on the ball and around the goal.

The conditions, given the situation, were spectacular. Both Guerrieri and Minnesota head coach Mikki Denney Wright went out of their way to praise the facilities staff âÄî and the parents and 13 Gophers wrestlers that pitched in âÄî for moving the 80,000 cubic feet of snow required to clear the field for play. There were a handful of slips and the ball skipped across the moist grass, but the natural turf held up remarkably well.

âÄúIâÄôve played in a lot of games that it snowed this much, but this is the best job IâÄôve personally ever seen of clearing a field and getting it ready,âÄù Denney Wright said.

Their work isnâÄôt over. Shortly after the game ended, Minnesota learned that top-seeded Maryland had been upset in penalty kicks by Georgetown and that Elizabeth Lyle Robbie Stadium would host yet another NCAA tournament game.

Bethke let out a yelp when she heard the news. âÄúWe just keep coming back here,âÄù she said. âÄúI donâÄôt know what it is. We thought senior day was our last day here âÄ¦ ItâÄôs just a great shock that we get to host again.âÄù

Under what conditions they will host remains to be seen, but itâÄôs hard to imagine another team handling whatever Mother Nature throws at the Twin Cities better than the Gophers.