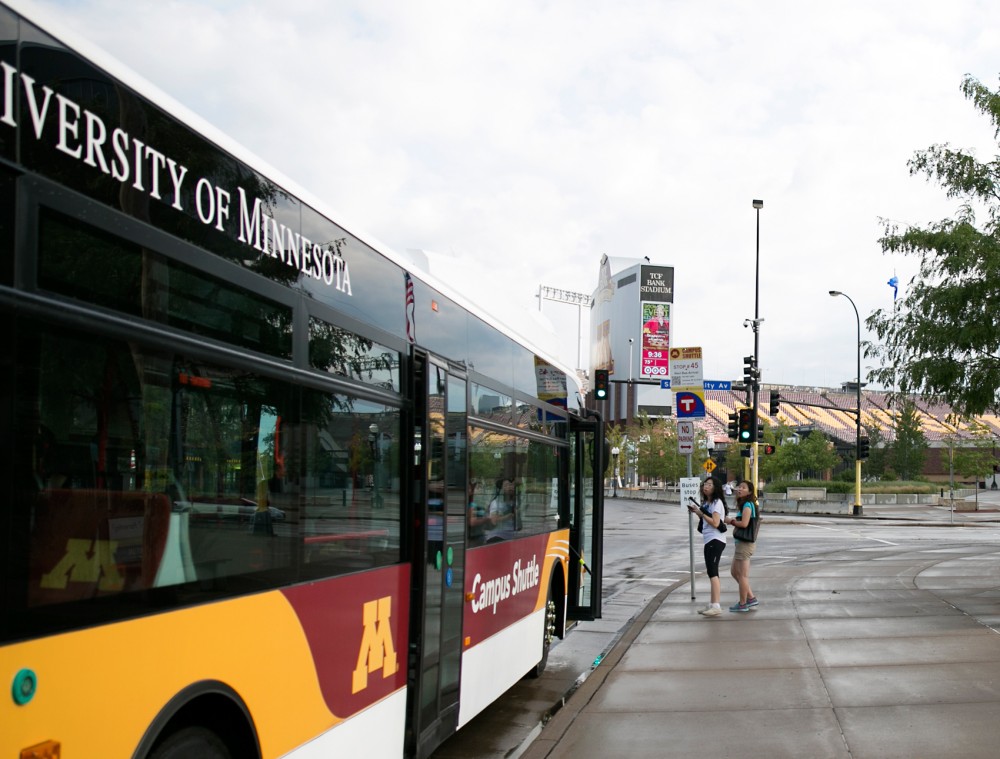 Pedestrians board a campus shuttle at the corner of University Ave SE & SE Oak St on Sunday. The new bus stop near TCF Bank Stadium is one of many new stops the University has implemented for the Fall of 2015.

Jonathan Tvedt
University of Minnesota bus routes have been tweaked after a 2014 University study pointed out areas where the school’s shuttles could be more
effective.
The changes were implemented last week after a study by University transportation and measurement offices along with a committee of student leaders and other officials concluded that transit times and service could be improved with more efficient routes.
“Our [old] routes didn’t reflect the results of the survey data,” said Alison Oosterhuis, the Minnesota Student Association’s director of infrastructure.
Among the changes is discontinued late-night service, which was axed because ridership was low, Lonetta Hanson, University Parking and Transportation Services assistant
director said in an emailed statement.
The East and West Bank, Washington Avenue Bridge and Weekend circulators were combined into one route run by the Fourth Street and University Avenue circulators in
opposite directions. A new Stadium Village and Superblock Circulator was added as well.
The Campus Connector — the University’s most-used route — will see increased service to the Dinkytown and Southeast Como area to fill gaps in service, Oosterhuis said.
The new shuttle routes are intended to serve the campus’ top destinations and align with building hours, according to an August press release.
Modifications were made to accommodate a growing ridership in the University area, which now serves about 3.5 million people annually and is the state’s third largest traffic generator, Ross Allanson, director of PTS said in an emailed statement.
He said he’s confident the adjustments will meet the University community’s needs.
Oosterhuis said she thinks students will have a better student experience overall because these changes will make the University shuttle system quicker and simpler to use.
“The extensive process that we engaged in resulted in routes that should prove to meet our University community’s needs to move about campus quickly and safely,” Allanson said in a statement.
The University has put out updated maps with routes and times online and throughout the Twin Cities campus in places such as Coffman Union and the St. Paul Student Center. A real-time, GPS-based system, allows riders to see the location of campus buses. Riders are also able to track arrival times online.
Delete Image
Align Left
Align Center
Align Right
Align Left
Align Center
Delete Heading