The team increased its number of set victories in a row to 22 on the weekend. 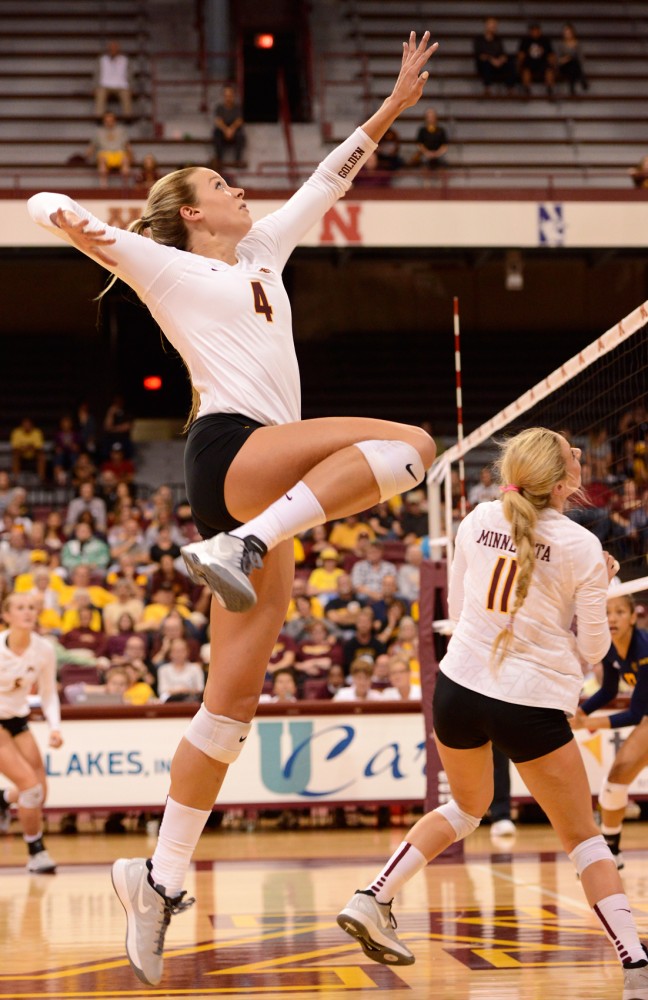 Junior Paige Tapp prepares to hit the ball against UC Irvine at the Sports Pavilion on Friday September 11, 2015.

Emily Polglaze
The Minnesota volleyball team traveled south last weekend and proved their hot streak is not burning out anytime soon.
The Gophers recorded three sweeps at the Charleston Classic invitational to take the tournament title and closed out their nonconference slate with 22 set victories in a row.
“We just played our game and controlled every aspect from the serve,” junior middle blocker Paige Tapp said. “Everyone came out and was very consistent, and we spread the ball around and got everyone involved. That’s what really helped us.”
The Gophers opened up the Charleston Classic against Bryant University and immediately gave the Bulldogs a challenge with a 25-12 victory in the first set.
Minnesota kept up the pace through the second set, which also ended 25-12, and let Bryant earn only five more points in the third set. The Gophers took the match on a 25-17 victory.
Sophomore middle blocker Molly Lohman was big on defense for Minnesota with eight total blocks, the match high for the team.
With 14 kills in 17 attempts, Tapp earned her season-best hitting percentage in the match at .765.
The Gophers were up bright and early Saturday morning for a 9:30 a.m. match against Sam Houston State, but their energy was alive and well.
An early Bearkat rally in the first set cut a Minnesota lead to 5-4, but the Gophers answered back quickly to pull farther out in front for the rest of the set.
Minnesota wore Sam Houston State down little by little, with a 25-13 second-set victory and a 25-11 victory in the third and final set.
All 14 available Minnesota players saw action during the match.
Senior Daly Santana led the team with nine kills in 22 attempts in the match.
“Daly continues to be very solid for us, and that’s great,” head coach Hugh McCutcheon said. “Other people are stepping up around her.”
Minnesota’s final match of the Charleston Classic wasn’t quite as easy as the others.
Though the Gophers jumped out to a 6-1 lead in the first set, the home team, College of Charleston, held on tight and only gave the Gophers a four-point victory.
The Cougars let up a bit in the second set, as Minnesota took it 25-17, but the third set was a battle until the end.
The Gophers seemingly had the match locked up with a 21-16 lead, but the Cougars wouldn’t go down quietly. They rallied back to make the score 24-23, but the Gophers prevailed to secure the tournament sweep.
Freshman Samantha Seliger-Swenson had 40 assists in the match and had a total of 96 on the weekend.
Santana again led the team in kills with 13 in the match.
Lohman and Tapp were named to the All-Tournament Team, while Santana was awarded a tournament’s Most Valuable Player award for the second weekend in a row.
“We keep building every day, and we’re gaining some confidence,” Seliger-Swenson said. “If we can stay composed in the moment of battle, it’s going to be a great season.”
Delete Image
Align Left
Align Center
Align Right
Align Left
Align Center
Delete Heading