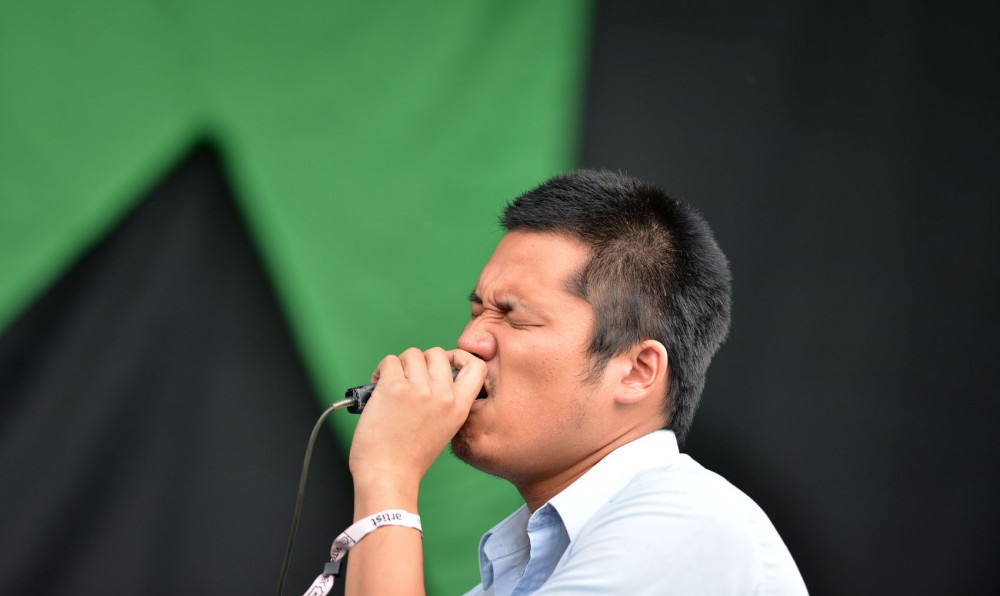 Alex Zhang Hungtai has created a character for himself. He’s Dirty Beaches, the lone traveler of lo-fi. Performing on stage at the Pitchfork Music Festival in Chicago he was stoic but powerful. He was silent and seated for much of the set’s beginning, but then he became impassioned, growling through his mic and even standing up for a few songs.

After the release of his 2011 debut “Badlands,” a fiction was built around Hungtai, a Taiwan-born Canadian immigrant who has said he doesn’t feel at home anywhere. To critics and listeners, he became a cowboy figure, traveling alone and finding himself while making an indie/metal hybrid well suited for a dusty saloon. But as Hungtai told A&E on Saturday, the true grit image can be difficult to maintain:

There’s such a trend toward lo-fi music, and I feel like you guys do it very differently. Can you explain that?

I think that lo-fi music now is that people record really nicely on their computers, and then they add distortion on top of it. And you can tell.

We’re actually trying to make it as clean as possible, but since we’re recording on such [expletive] equipment, it has a little bit of a distortion to it.

So your goal is not to be lo-fi?

But your sound is so based in this gritty feel. Do you think high quality production would change that?

I also want to know what you think about this image I think you have. When music writers talk about you, they write about dusty roads and, like, old cars. Do you feel any of that?

No, not at all. I mean, we try to avoid dusty roads. And we try to avoid old cars, because they’re not reliable at all. I’ve been on tour in them, and they [expletive] break down. When you got to change a tire in the middle of nowhere in the desert or some [expletive] when the engine overheats, it’s your worst nightmare. You don’t want that at all.

Where do you think music writers get that kind of imagery though?

I mean, obviously, the album has that man-on-the-open-road romanticism. But I think they take liberty in describing me, whereas they can’t separate — I already told many that the album is a combination of fiction mixed with my own experiences so it’s easier for me to relate to when I’m performing it. So it’s not all made up.

Is there any part of you that likes the illusion?

Yes and no, I think. I think that before I’m confronted with it, I’ve kind of enjoyed it.

If I show up with a shaved head because it’s summer and it’s really hot and people in Europe who are fans are like, “What happened to your hair?”

They expect you to maintain a certain image. I think it’s kind of unfair for people to expect that or request that even.

I guess they like bigger-than-life figures. And when they find out that I’m a regular guy who used to work at a kitchen, the illusion shatters.

But at the same time, I make new fans of people who just like me for the music.