The men lost at Illinois using an experimental scoring format. 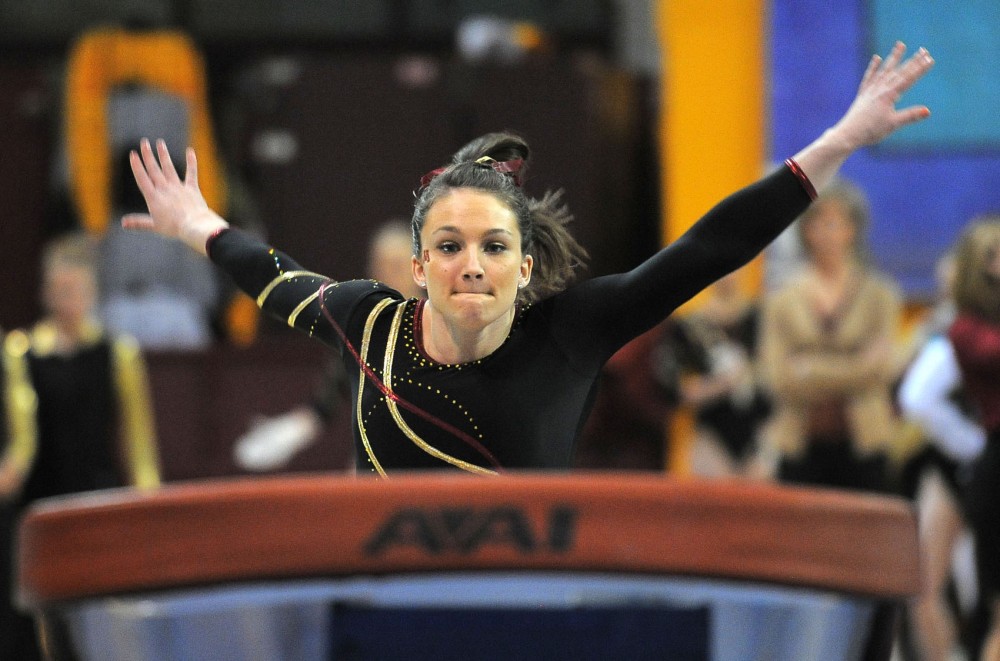 Minnesota's Cierra Tomson competes on the vault on Saturday, March 9, 2013, at the Sports Pavilion.

The Gophers women’s gymnastics team knows it has a lot of work to do before the Big Ten championships.

Saturday night was a step in the right direction.

Minnesota beat No. 12 Nebraska  and No. 24 Arkansas  at the Sports Pavilion in front of an announced crowd of more than 2,100 people.

The building was loud throughout the meet, but Nebraska fans were louder than Gophers fans for most of it.

But when Minnesota took to the floor exercise in the final rotation, its fans came to life.

The Gophers put the meet away with five solid routines on the event, bringing the crowd to its feet.

Coach Meg Stephenson  said floor exercise is fun for both the fans and the gymnasts.

“We really talk a lot in practice about performing,” she said. “Our fans have always been really receptive to our type of choreography in our routines, and I think they just appreciate the athletes.”

It was community night for the Gophers’ Hanna Nordquist, but the freshman said she felt no added pressure despite competing in front of family and friends.

Stephenson said Nordquist was sick for most of the week. Still, she scored 9.9 to win the balance beam.

Although the Gophers won, Stephenson and her gymnasts said it wasn’t their best performance of the season.

“But we were still able to beat some good teams,” Stephenson said. “I think it shows the quality of the team.”

There’s a lot to look forward to Saturday  when Minnesota hosts Ohio State.

The Gophers can tie Michigan for the Big Ten regular-season title with a win. The meet is also the Gophers’ last chance to boost their best home score. High scores at home next week and at the Big Ten championships will be crucial for seeding at the NCAA regional April 6.

The Gophers men’s gymnastics team proved Friday night that not all experiments go as planned the first time around.

Using a new competition format and scoring system to make the meet easier for fans to watch, Minnesota struggled on vault and high bar and lost to Illinois 430.6-420.65 in Champaign, Ill.

The Illini won 21 of the 30 head-to-head matchups. They swept all five points on two events and won five of the six events.

Coach Mike Burns said the hardest part of the competition style was not knowing how each routine scored on an event while trying to decide which gymnast to pick for the next event.

Both teams had only 30 seconds to pick their gymnast after watching the other team’s gymnast perform.

Since the coaches had to decide which gymnast to compete spontaneously, all five Gophers gymnasts on the event had to be ready to compete at a moment’s notice.

Morinishi said the meet format could be good for gymnastics someday because it brings out the competitiveness in each gymnast.

Minnesota’s best event of the night came on the parallel bars, where it took three of the five points. Sophomore Steve Jaciuk  and junior Harris Coleman  led the way.  But it was the only event the Gophers won in the head-to-head format.

The biggest surprise of the night came on vault. Minnesota has a better vault team than Illinois but was swept 5-0 in the head-to-head matchups.

Burns said his team had an uncharacteristically bad night while the Illini stepped up.

“It was a little hard to get up after that,” Burns said of the sweep on vault, adding that he thought the team could have won 5-0.

Despite the struggles Friday, Burns said he enjoyed the style of the meet. He said there are “some bugs” to work out of the new system, particularly the time of the meet.

Burns and Morinishi said the team was fatigued by the end of the meet.

It showed on high bar, the meet’s final event, when Illinois swept the top-four spots individually and won all five points in the head-to-head scoring.

Minnesota will travel to Lincoln, Neb., next weekend to face Nebraska and Iowa.