No. 14 Minnesota won five straight sets to open the weekend, including a sweep of the unranked Hawkeyes. 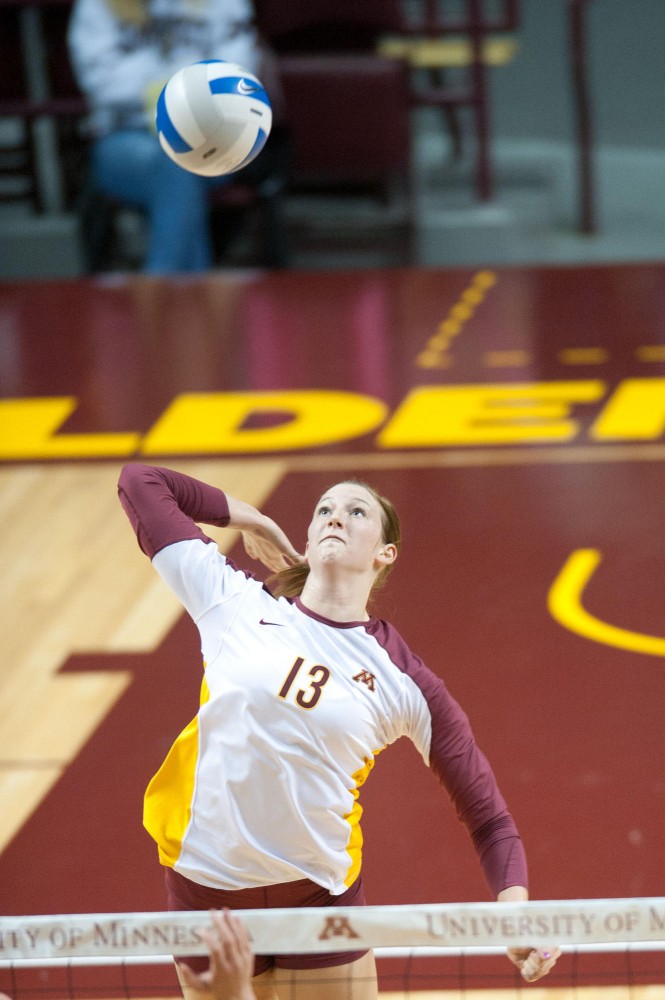 It was a tale of two matches, and a story of two different Gophers volleyball teams.

No. 14 Minnesota (11-6 overall, 4-4 Big Ten) split its home weekend series against Iowa and Nebraska, defeating the unranked Hawkeyes in straight sets Friday before blowing a 2-0 sets lead to the No. 5 Huskers on Saturday.

âÄúIt was the match that we thought would happen, but just a different result,âÄù Minnesota interim head coach Laura Bush said. âÄúWe didnâÄôt expect to fade as much as we did in the third and fourth set.âÄù

It was also MinnesotaâÄôs fourth conference loss, which effectively knocked the team out of contention for a Big Ten title in 2011.

It is not a mathematical impossibility that Minnesota storms back for a title, but it would be unlikely given that Illinois and Nebraska are both 8-0.

The Gophers played in front of a crowd of 9,354 at Williams Arena on Saturday night âÄî the fourth largest in team history âÄîand for an hour, they looked just as impressive as their fan base.

Minnesota jumped ahead early and withstood a late Nebraska rally before closing out the longest set of its season behind a pair of kills from sophomore Ashley Wittman.

Wittman had nine kills in the first set and five in the second set, which Minnesota won handily.

Then the Huskers put their foot down.

They outscored the Gophers 65-33 in the last three sets, and forced 25 hitting errors, including seven from Wittman.

For the match, the Gophers set a season-high with 36 hitting errors.

Seventeen of those errors came on blocks from Nebraska, which took advantage of MinnesotaâÄôs poor passing to shut down its outside hitters.

âÄúI wouldnâÄôt say it was a bad night,âÄù Wittman said. âÄúOur communication and effort was slowly decreasing in the third and fourth [sets], and we werenâÄôt able to put passes on [setter Mia Tabberson]âÄôs head.âÄù

Sophomore Tori Dixon added 12 kills while hitting a team-best .286. She won three consecutive points for the Gophers in the fifth set, but was blocked on the next point, which gave Nebraska a 12-9 lead.

Such a task will be an uphill battle for a Minnesota team that lacks depth to the point that it has relied on a seven- or eight-player rotation for much of the season. Whenever opposing defenses have found an answer to the GophersâÄô primary attackers, Minnesota has been unable to strike back.

âÄúWe needed to pass better,âÄù Bush said. âÄúWe put [Tabberson] on a 100-yard dash at times, so we couldnâÄôt have an effective offense. We hung some of our hitters out to dry because they were our only option.âÄù

Bush compared the match to the GophersâÄô five-set home loss Sept. 23 to Illinois, which also featured a series of Minnesota errors late in the match.

âÄúIâÄôm really happy with our performance in two and a half sets. Now itâÄôs just [about] putting together a complete game against a top team,âÄù Bush said.

The Gophers dominated the Hawkeyes from start to finish, forcing them into as many errors (22) as kills while dominating every statistical category.

Wittman, Harms and Tabberson each had two aces for Minnesota, which set a season-high with seven aces overall. The Gophers set the tone early in the match with their aggressive serving.

âÄúThey worked really hard on serving [in practice this week],âÄù Bush said Friday. âÄúItâÄôs nice to see, regardless of who the opponent is, that they got rewarded with some service aces.âÄù

The Gophers had just three aces against the Huskers, which was more a product of NebraskaâÄôs consistent passing than a lack of aggressive serving.

The Huskers had five aces in their win, matching a Big Ten season-high. They served conservatively, but targeted Cowles and Wittman throughout the match âÄî a strategy that has troubled Minnesota during Big Ten play.

The Gophers will play their next four matches on the road, starting with a border battle Oct. 19 at Wisconsin.