The Gophers had a 2-0 lead, but gave up two in the second and third periods to seal defeat. 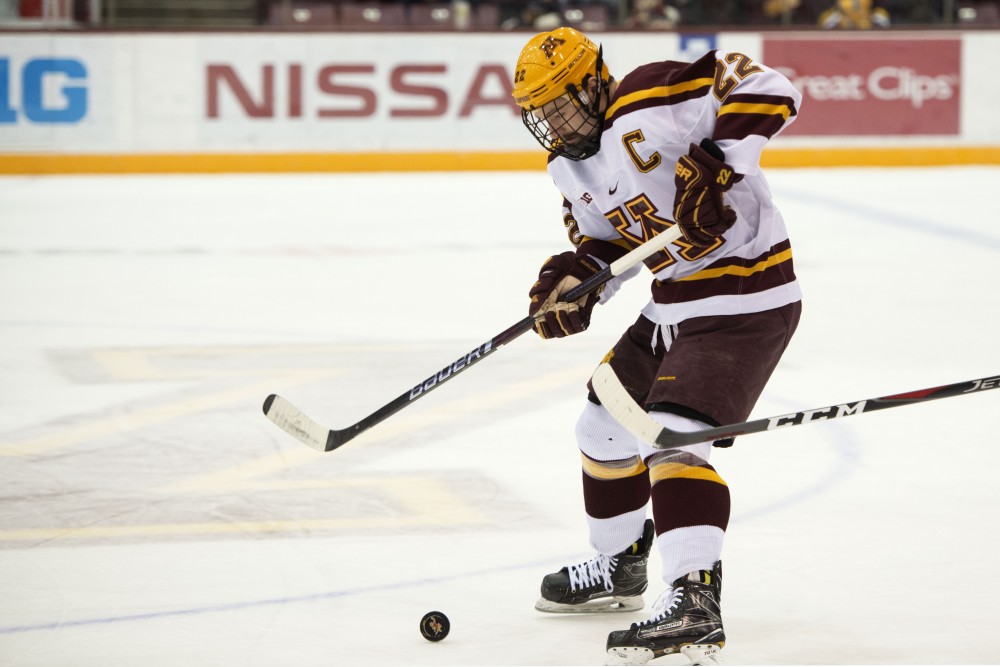 Senior Tyler Sheehy skates with the puck on Saturday, Nov. 17 at Mariucci Arena.

The men’s hockey team couldn’t ride the high of the football team’s victory over Wisconsin on Saturday.

Minnesota faltered in the second and third periods, giving up a 2-0 lead around the mid-point of the game. Michigan State emerged with the victory 4-2, splitting the series.

“We were fighting that energy thing tonight,” said head coach Bob Motzko. “Right now we only have it one night a weekend, we didn’t have it tonight. … Once we had the 2-0 lead, we should have found it.”

The first period left much to be desired for both teams, as the Gophers were outshot 7-3 and neither team registered a goal. The slow start was a shocking juxtaposition next to the offensive firestorm in Minnesota’s 7-2 victory just a day before.

Senior captain Tyler Sheehy scored the two goals for Minnesota. They were two goals on the power play less than three minutes apart. The Gophers failed to tally a goal at even strength.

“Obviously, we wanted to come into this weekend and get two wins,” Sheehy said. “[We] kind of threw a curveball tonight and came out flat. I think, in the end, it cost us.”

A slow start filled with penalties contributed to Minnesota’s inability to gain control and start an offensive possession as planned. The Gophers had two penalties in the first and second period each and were forced to send out defensive-minded forwards with the disadvantage, keeping them away from generating offensive chances.

Sheehy said the penalties changed the momentum in the game.

“It’s a tough way to play the game, when we’re in the box and we’ve got to kill penalties,” Sheehy said. “It really takes away from momentum, especially the offensive zone penalties, we can’t be doing that.”

Defenseman Jack Sadek was one of two Minnesota defensemen who had a -3 rating on the night, along with Clayton Phillips.

Motzko iterated much of the same sentiment in his postgame interview. He said the 2-0 lead in the second should have been enough to kick the team into gear and take the rest of it to close out a victory.

“There was not much going on in the first part of the game until we score two power play goals,” Motzko said. “That should have been our [key] to put our foot down and take control of the game.”

The thorn in Minnesota’s side was the electric skating and scoring ability of Michigan State’s top line. Informally dubbed the “KHL” line, it consists of forwards Patrick Khodorenko, Taro Hirose and Mitchell Lewandowski. Hirose led the way with three points on the line, a goal and two assists, while Khodorenko got a goal and assist and Lewandowski registered one assist.

The Gophers loss gave them a series split with the Spartans. Minnesota heads into next weekend with another series at 3M Arena at Mariucci, this time against Ohio State, one of the three Big Ten teams that made it to the Frozen Four last season.