U grad turns love of beer into business 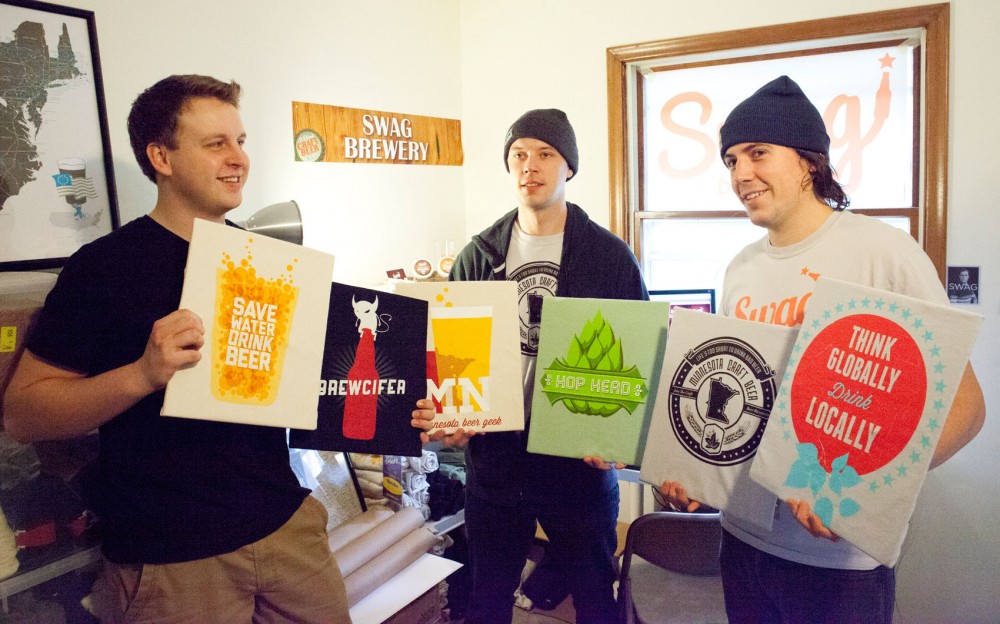 Craft beer lovers can now wear their passion on their sleeves — or even their ears.

Swag Brewery, founded by a University of Minnesota graduate and his friend, sells merchandise for craft beer lovers, like soap made partly of beer, T-shirts, coasters and earrings, or “beerings.”

Launched in January, the company has an official contract with Summit Brewing Company and ties with other companies like Surly Brewing Co.

Founder Maxwell Arndt worked with friend Colin McSteen, a Maryland Institute College of Art graduate, to put the company together. With McSteen’s artistic talent and Arndt’s business know-how, the two knew they wanted to work together, McSteen said.

“Colin and I met up for beers repeatedly,” Arndt said. “Eventually we hashed out this idea to outfit the craft beer and home brewing industry.”

The company isn’t Arndt’s first. In 2010, he designed the Toepener — a gadget that allows people to open doors with their feet rather than touching handles, reducing contact with germs and paper towel waste.

But the product caused some controversy when a Missouri-based business, StepNpull, which sells a similar product, claimed Arndt and his partners acted unethically while conducting product research.

The company is still operating with Arndt’s original partner in charge, though Arndt is no longer involved. He said he wanted to move on to other things.

His interest now lies in Swag Brewery, which he said combines his love for craft beer and home brewing with his business experience.

McSteen is the company’s creative designer and is in charge of coming up with different product ideas. But the manufacturing of products is outsourced to independent producers across the country. The shirts are printed in Richfield, Minn., and Swag hires people on a contract basis to create the soap and earrings. The coasters come from Idaho and some of the craft beer prints are produced in Brooklyn, N.Y.

In early January, Swag traveled across the state to beer festivals to test their products. The sales exceeded expectations, Arndt said. The company has since then expanded to online operations rather than just vending at events, with help from Brett Bartley, a University graduate and Swag’s web director.

“I build the bare bones and structure,” Bartley said. McSteen worked to pick “all the cool images and the art” for the site.

“We’re just kind of getting our feet wet with Pinterest,” Bartley said. “What we do is pretty visual, so we put our designs out on Pinterest so people can share them.”

While it has only worked with Minnesota-based breweries so far, the company is looking to expand to craft-beer brewers in other states.

The company will go to beer fests in Wisconsin, Iowa and Nebraska in the coming months. It also has online customers from New Jersey, Texas and California, Arndt said in an email.

Arndt said he plans to stay with Swag for a couple of years.

“It’s really fun, but who knows what’s down the road,” he said. “It may be fun to actually brew beer at some point, but for now, it looks like we’re going to be doing this for a while.”