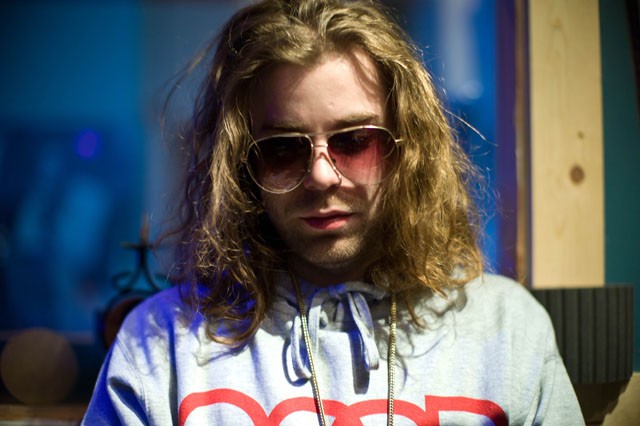 HeâÄôs been busy producing music at his recording studio in Minneapolis. The place is riddled with pipes, blunt wraps and old copies of XXL. ThereâÄôs a friend passed out on his couch. A few others are huddled around a computer watching a Tyler, the Creator performance in the dark.

Smith is the face behind the âÄúhippy hopâÄù creation Mod Sun. And his rap career is at somewhat of a crossroads. HeâÄôs a finalist in Rolling StoneâÄôs âÄúDo You Wanna Be a StarâÄù competition âÄî a readers poll for unsigned artists to compete for a spot on the magazineâÄôs cover. Round one just ended yesterday, and on March 16th, Rolling Stone will announce the finalists who made the cut. If Smith advances, heâÄôll be flying out to New York. HeâÄôs just waiting for that phone call.

ItâÄôs only March, but Smith has had a busy year. In January, he opened for the Wu Tang Clan at Epic. Last week, he got a voicemail from Rick Ross. It seems that Mod Sun is finally making some waves.

But Smith wasnâÄôt always the raggedy, jovial emcee he is today. Since graduating from Bloomington Jefferson High School in 2005, he has spent most of his time on the road, performing as a drummer in a series of rock bands. After being kicked out of emo quartet The Semester in response to a contentious touring experience, Smith joined post-hardcore act Four Letter Lie only to leave the group to pursue his rap career in 2009.

Smith always liked to rap. While on tour, he would break out into freestyles for friends. After leaving Four Letter Lie, he bought a keyboard, rented out some studio space and began penning his own rhymes. He also changed his name from Derek to Dylan a year ago because he âÄúdidnâÄôt want an âÄòickâÄô soundâÄù in his name, he said.

âÄúI always definitely wanted to say something and on the drums I was only speaking with my hands and my feet,âÄù Smith said. âÄúAnd I wanted to entertain and interact more with the crowd.âÄù

But according to Smith, Mod Sun âÄî which stands for Movement On Dreams, Stand Under None âÄî isnâÄôt just a rap project. ItâÄôs a movement. And while the main tenet of his âÄúhippy hopâÄù campaign is unclear, Smith has set some lofty goals for himself.

âÄúIâÄôm the first musician in history with no fans. Everyone who listens to me is my friend. ItâÄôs called a friend base,âÄù Smith said. âÄúSo itâÄôs not like when I say Mod Sun is going to be iconic, IâÄôm not saying IâÄôm going to be iconic âÄ¦ [âÄòhippy hopâÄô] is going to be credited as a lifestyle, as a movement.âÄù

âÄúIâÄôve always loved lyrics. There was never a song that was too deep for me to understand,âÄù Smith said. âÄúYou know, some people will listen to a Radiohead song, or Bright Eyes or a Bob Dylan song and theyâÄôre like, âÄòI donâÄôt get it.âÄô There has never been a song I didnâÄôt get. There was nothing too deep for me.âÄù

There doesnâÄôt seem to be much room for doubt or uncertainty in the world of Mod Sun. His positivity is disarming. Smith speaks in absolutes, and while he seems to be utterly detached from reality, he is an artist brimming with confidence.

âÄúI never had any doubts, because I know the potential of what you want to do is uncompassed, unsurpassed. ThereâÄôs no limit to the possibility,âÄù Smith said. âÄúYou can do anything,âÄù

But whether or not you think âÄúhippy hopâÄù is the worldâÄôs next counterculture movement or simply the inane ramblings of a drug-addled burnout, Smith doesnâÄôt seem to be phased by it one way or another.

Mod Sun isnâÄôt ready to go to sleep quite yet.