The junior is having plenty of success running the point so far. 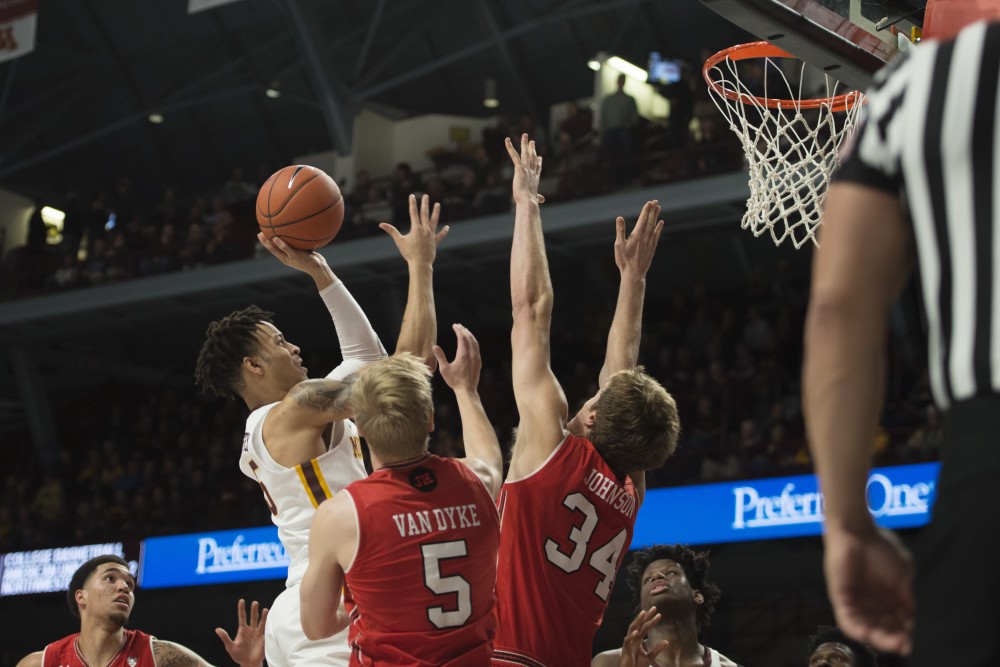 Junior Amir Coffey jumps for the layup on Monday, Nov. 12 at Williams Arena. The Gophers beat the Utes 78-69 and Coffey finished with 14 points.

One Gophers basketball player wasn’t brought in as a point guard, but he’s now thriving this season at the position.

Amir Coffey may not look like a point guard but Minnesota is more than comfortable with the ball in the hands of the 6-foot-8 junior. Head coach Richard Pitino said his combination of size and skill creates mismatches for opponents on the court.

“You have to make a decision on how you want to guard him,” Pitino said. “He’s really skilled, obviously. We’re taking for granted that he’s [6 feet, 8 inches] and he’s bringing the ball up the court like he’s [6 feet, 2 inches].”

For his first two seasons with Minnesota, Coffey didn’t get as many opportunities to bring the ball up the court with Nate Mason running the offense. However, with Mason now graduated, Pitino has entrusted Coffey to play the point. So far, he’s shown no indication that the position change has posed any challenges for him.

“I feel good,” Coffey said of the position change. “It’s something that I’ve been practicing all summer with my team. It’s no different than running the three, really, it’s just bringing the ball up.”

The Hopkins, Minnesota native came into the program with high expectations on his shoulders. Those shoulders, specifically the right one, have unfortunately given Coffey problems. Last season he missed 14 games due to a shoulder injury. Before that, he had started all but one game of his college career. Recovery took time and effort, but Coffey now feels he’s back at full strength.

“I had to lift a little bit different because of my shoulder,” Coffey said. “I started to get my strength back, I got back on the regular plan. Just getting stronger is most important.”

There doesn’t appear to be any lingering effects of the injury hampering Coffey. Through the first three games of the season, he’s shooting 50 percent from the field and leading the team with nearly 15 points per game.

There’s no doubt having Coffey on the court makes the Gophers better. His teammates are glad to have him back after he missed so many crucial games last year, and have liked what they’ve seen from his ability to run the point.

“When he decides to be aggressive, he’s a totally different person,” said senior Dupree McBrayer. “He’s tall, he sees over defenders, he makes passes that a shorter point guard wouldn’t make.”

Part of becoming an upperclassman in any program is increased responsibility as one of the team’s leaders. While Coffey is the first to admit he’s not the most vocal teammate, he shows his leadership in other ways.

“I’m not really a big talker,” Coffey said. “I just like to stay quiet and do what needs to be done.”

Coffey’s maturity has impressed his head coach since the day he joined the program, especially regarding his on-court demeanor. Pitino says his junior is somebody teammates can look to and strive to emulate in close games.

“He’s a calming influence,” Pitino said. “We’ve got some calming influences on the court and [Coffey] is definitely that, and that’s important when you’re looking at a point guard. [Coffey] never ever seems rattled.”

This season, it will be crucial that Coffey, McBrayer and other guards freshman Gabe Kalscheur, sophomore Isaiah Washington and redshirt senior Brock Stull all stay healthy and play well. The team already lost some backcourt depth they hoped to have this year. Last week, the NCAA denied sophomore Marcus Carr’s waiver appeal to become eligible immediately after he transferred from Pittsburgh.

“I’m disappointed with it,” Pitino said of the ruling. “I think that this whole process is really flawed.”

After completing three games in four days at the Vancouver Showcase, Coffey and the Gophers will travel to Massachusetts on Monday to play Boston College in the Big Ten/ACC Challenge.