Nebraska traveled a sea of red to TCF Bank Stadium two years ago and won. 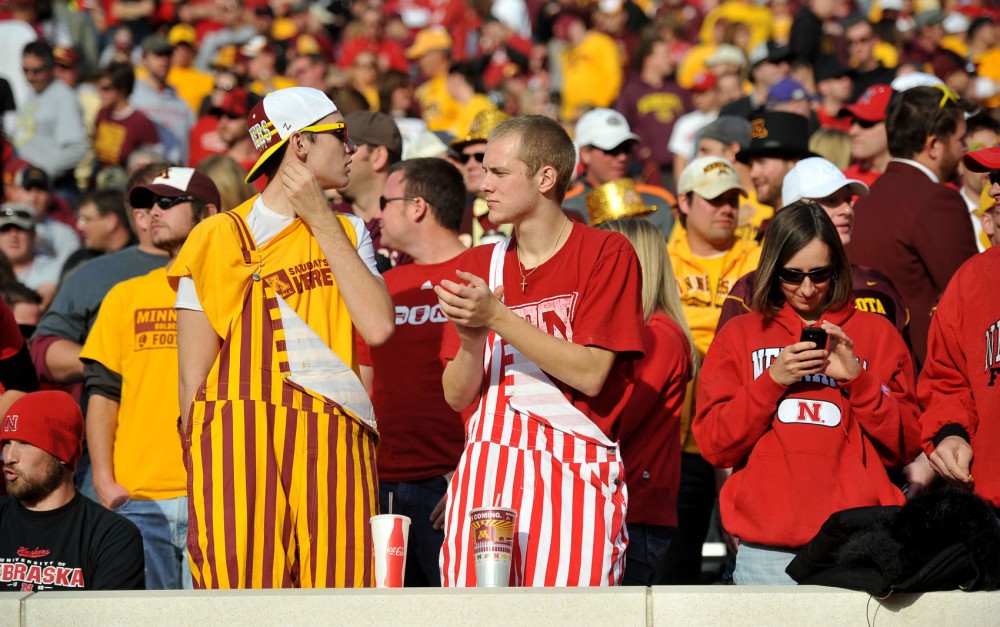 A mix of Minnesota and Nebraska fans at the homecoming game on Saturday, Oct. 22, 2011, at TCF Bank Stadium. Nebraska fans filled up around two-thirds of the seats.

The last time the Gophers hosted Nebraska, the Huskers dominated the scoreboard.

Nebraska last traveled to Minnesota in 2011, winning 41-14. A significant number of the Cornhuskers’ fans made the trip with the team and limited the Gophers’ home-field advantage.

The Gophers are hoping to return the favor this Saturday.

“Historically, their fans will go anywhere with them, and we welcome that,” said Gophers senior safety Brock Vereen. “It’s going to be a great atmosphere.”

Though the University wants to see more fans in the seats this time, its associate athletics director for strategic communications, Chris Werle, said there’s little the athletics department can do to restrict the number of Nebraska fans at the game.

Minnesota gives 3,000 tickets to opponents to distribute however they like, he said. Most schools in the Big Ten and around the country follow the same procedure.

For Nebraska, 3,000 aren’t nearly enough to satisfy all of the fans who want to go to the game, he said.

“They just have one of those fan bases that travels extremely well,” he said. “They do it everywhere in the Big Ten, too, not just at Minnesota.”

He said the athletics department hasn’t tried any different marketing tactics to get more Gophers fans to the Nebraska game this year.

For some Gophers fans, seeing thousands of Nebraska fans in the stands two years ago was an embarrassing experience.

“It’s just sad that we could possibly get outnumbered at home in terms of fans,” said business and sport management senior Mitch Fiereck.

He said he expects to see a few more Gophers fans this year because the team has improved since 2011.

The last time the teams squared off in Minnesota, the Gophers were 1-5 and winless in the Big Ten. This year, the Gophers are 5-2 and riding high following a road win over Northwestern.

Still, Fiereck said he doesn’t foresee much of a difference from 2011.

“The problem is, it’s mostly the devoted Gophers fans that show up for these games,” he said. “Unless the team is doing great, which they usually aren’t, you don’t see many casual fans.”

“Wisconsin fans used to come up here when we played it at the Metrodome,” he said. “It’s like someone’s taking over your house. It sucks.”

While Minnesota’s football culture might not be up to par, football is king in Nebraska.

“There’s not a whole lot like Nebraska football out there,” Nebraska senior Reid Lund said.

Unlike Minnesota, Nebraska has no professional sports teams, Lund said, so Nebraska fans are wild for college sports. That devotion drives its fans to travel.

Lund, a Minnesota native, said the football culture at Nebraska is so strong that the University does not even need to promote games.

“We’re spoiled to a certain extent,” said Nebraska football head coach Bo Pelini. “No matter where we go, we always have a tremendous showing by our fan base.”

Nebraska offers its students its annual Student Migration Game. Every year, the school pulls together as many student fans as possible and sends them to one away game.

In 2011, Nebraska chose Minnesota for the migration game. This year, they’ll come to Minneapolis again.

Gophers football players said they’re ready, and they hope Minnesota fans are, too.

“We know that Nebraska has a great fan base, and they’re probably going to be over here,” sophomore quarterback Philip Nelson said. “We need to be able to counter that with our fans.”