Minnesota has lost just two sets of 27 total at the Sports Pavilion so far this season. 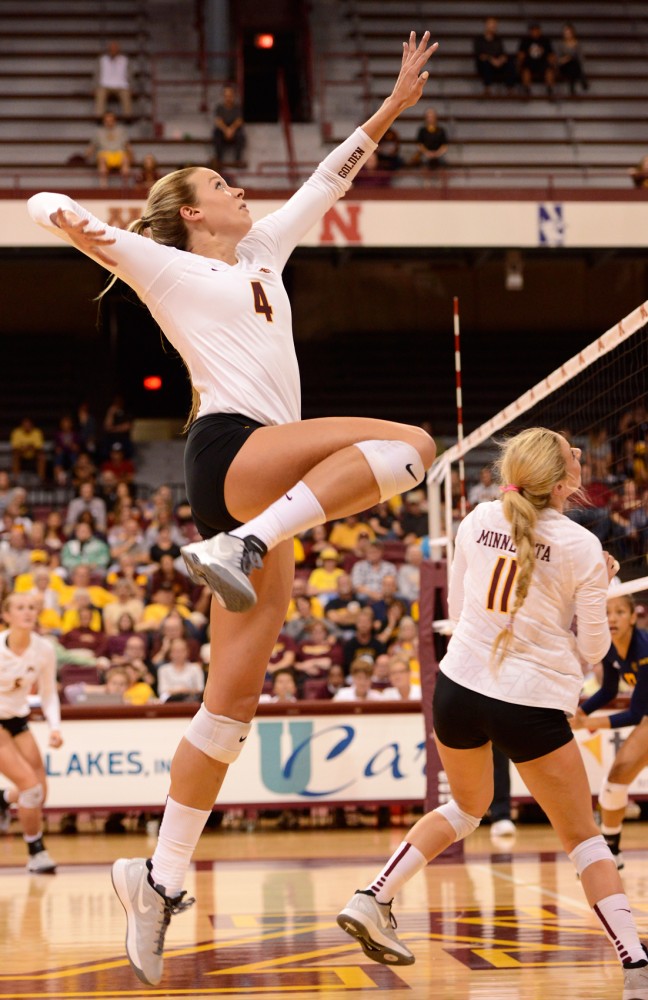 Junior Paige Tapp prepares to hit the ball against UC Irvine at the Sports Pavilion on Sept. 11, 2015.

No. 2 Minnesota swept unranked Indiana in straight sets at ho

me, keeping its 9-0 undefeated record at the Sports Pavilion this season intact.

“It was an important match for us tonight,” said head coach Hugh McCutcheon. “It was important to come in here and be able to grind out a win. I was proud of the way our athletes were able to fight them off and still come in with a 3-0 win.”

Minnesota outhit Indiana throughout the match .245 to .217.

Senior middle blocker Paige Tapp led all players with 11 kills, and also hit .524. She also had five digs and five blocks for a diverse match.

“I thought it was pretty consistent from all ends,” Paige Tapp said of her and her team’s game. “Just getting that offensive diversity in our sets, going pin to pin will really help us in the future”

The Hoosiers troubled the Gophers the most in the second set, with a 26-24 set score.

Indiana started off the set hot, going on a 12-7 run, giving them a lead they would hold late into the set.

The set was finished off by consecutive points from senior middle blocker Hannah Tapp and Paige Tapp respectively, putting the Sports Pavilion crowd on their feet.

“It’s hard when a team has that far of a lead in the Big Ten to come back,” Hannah Tapp said. “I think we did a good job playing it point to point and getting runs when we could.”

Indiana outhit Minnesota .278 to .212, but had six service errors on the set, ensuring a set victory for Minnesota.

The Gophers started slow in the first set and allowed Indiana to keep it close in the beginning. A 9-1 run midway through the set that included a powerful kill from senior outside hitter Sarah Wilhite gave Minnesota an 18-9 lead.

Despite Indiana’s best efforts, that run was enough for the Gophers to hold on and win the set 25-21.

The Gophers were led by Wilhite, who had five kills, followed by Paige Tapp with three kills.

To close out the match, Minnesota beat Indiana 25-21 in the third set.

This set saw an electric effort from Hannah Tapp, who had three blocks to silence the Hoosiers.

The set was back and forth, until it was knotted up at 18-18 after an ace from junior libero Dalianliz Rosado that was a point initially given to Indiana and challenged by McCutcheon.

“That’s one of the great things about having CRS (video replay), getting the right call at the right time,” Mccutcheon said.

The challenge acted as a catalyst for the Gophers, as they went on a set and match-clinching run thereafter.

Minnesota will go on the road to face Maryland on Sunday, the start of its last road trip of the season.

“It will be nice to going to Maryland with a few more wins under our belt in the Big Ten,” Paige Tapp said. “Every game is going to be tough, so we just have to bring it from here on out.”