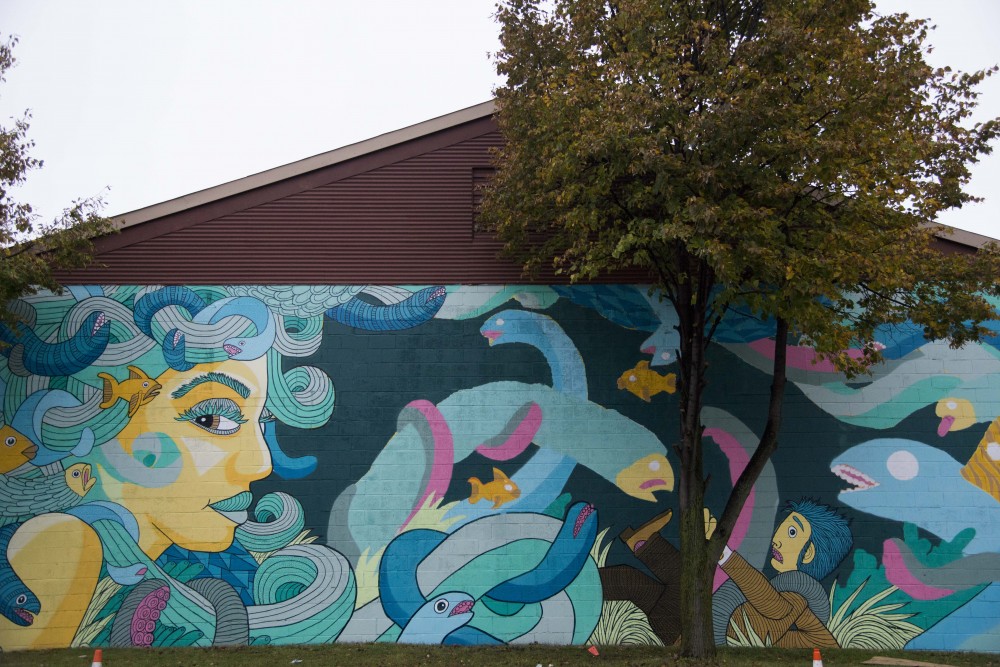 A mural painted by Artist Chuck U as seen on Wycliff Street on Thursday, Sept. 12, 2019.

The Twin Cities was doused in every hue imaginable during last week’s Chroma Zone Mural and Art Festival – the first of its kind in Minnesota.

Fifteen artists worked to install 12 large-scale murals in the “Creative Enterprise Zone,” an area between downtown St. Paul and Minneapolis filled with creative businesses and startups.

Catherine Day, a Chroma Zone organizer, said the festival pulled inspiration from major cities across the United States, including Denver, Detroit and the Wynwood district of Miami.

“We felt that St. Paul in particular is an important place to make a mark because we are such an artistic community here, and the Twin Cities is a globally significant creative community,” Day said.

Beyond the United States, street art is happening all over the world, Day said. She cited Reykjavík, Iceland and Athens, Greece as international examples.

Chroma Zone brought both local street artists and muralists from as far as Norway and Argentina.

Chuck U is an acclaimed local artist with work most notably featured on Indeed beer cans. Though he has been working as a professional artist for ten years, his piece for the festival was only his third large scale mural.

Using varieties of blue, purple, yellow and green, he painted a sea woman feeding a suit-clad man to what he called “pet sea worms.”

The rain last week in the Twin Cities hampered the mural-creating process by delaying painting.

It caused some issues for Chuck U, rendering him unable to work because if his mural became wet from rain, its intricate lines would drip.

Just down the block, Claudia Valentino and her partner Greta McLain worked on a mural illustrating the unity of younger and older generations through paint and mosaic work.

Valentino is a native of Argentina who moved to Minneapolis in 2009. Her mural work reflects her story. It features many different shades of green, a nod to the women’s movement of Argentina, which uses green as its representative color.

“It was really important to both of them to include green in this mural because it’s close to their hearts,” said Amelia Nielsen, an assistant to the artists. “This is their way of being connected to that movement.”

Sunflowers are also prominently featured in the mural. Nielsen said the flowers are known to naturally clean toxins from the Earth, making them a symbol of the role youth play today.

The murals created this past week will brighten the walls of the Twin Cities for at least a year, until the next Chroma Zone festival.

“It’s really about making visible the creative community,” Day said. “It’s about the importance of artistic expression and putting life and vibrancy into our community.”