U students concerned about climate change

The newly formed Minnesota 350 was the focus of the awareness event. 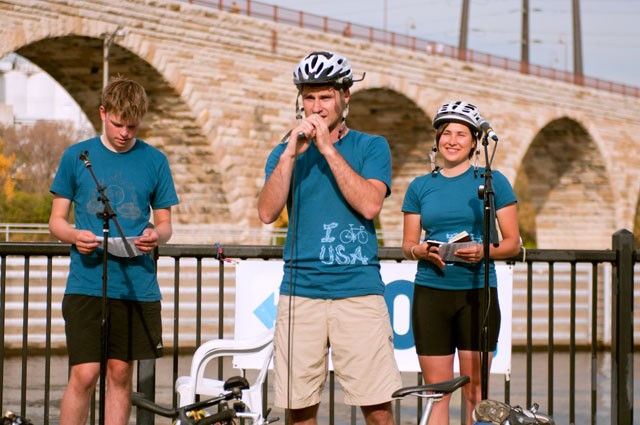 Malkolm Boothroyd (left), Alec Neal (center) and Katherine Ball speak at the Climate Solutions Revolution on Sunday at the Mill City Ruins in Minneapolis. The three are biking across the United States while making a documentary about climate change solutions in communities across the country.

Environmental activists employed dancing, live music and a giant whale to express a climate problem Sunday at Mill Ruin Park near the Stone Arch Bridge.
The Minnesota 350  is a newly formed coalition and it was the focus of the climate change awareness event.
There were about 500 people at the event, not including 200 who participated in a bicycle rally, said Julia Nerbonne, the director of the Environmental Sustainability Program at the Higher Education Consortium for Urban Affairs.
The whale prop was used in a narrative involving climate change, and several speeches were given on the controversial issue.
Currently the atmosphere is at 388 carbon dioxide parts per million and scientists say that 350 parts per million is the safe limit for humanity, said Nerbonne, who is also a fishery and wildlife professor at the University of Minnesota.
âÄúPeople are concerned about climate change and they want to send a clear message to our leaders that we are getting to work,âÄù Nerbonne said.
âÄúThis event is to celebrate and inspire leadership in the Twin Cities,âÄù University student Emily Lund  said.
Lund was an organizing intern for the event, contributing marketing services, managing media coverage and making sure the social network sites were updated.
Heather Kachel, an environmental sciences and policy management major, has spent the last two weeks in her HECUA class talking about climate change.
âÄúItâÄôs an issue we all feel passionate about,âÄù Kachel said.
Climate change and global warming are such big issues that sometimes it seems impossible to do anything about it, Dan Thiede said.
âÄúItâÄôs a really overwhelming and depressing subject,âÄù said Kachel, the Clean Energy Resource TeamâÄôs communications coordinator with the UniversityâÄôs Regional Sustainable Development Partnership. âÄúSo itâÄôs great to come out and see that people are trying to make a change.âÄù
âÄúItâÄôs been really great,âÄù Thiede said. âÄúThe speakers have been super energizing.âÄù
CERTs  work to help Minnesotans plan and implement energy efficient and clean energy projects, Thiede said.
âÄúFor those of us who are in the community, itâÄôs neat to see so many people working on similar issues,âÄù Thiede said.
At the Minnesota 350 event, Kachel and other members of her HECUA class had a stand showing how expensive and wasteful bottled water is.
Kachel said the stand was âÄúone small step into leading the future into a sustainable one.âÄù
Thiede and the rest of the CERTs talked to people at the 350 event about how they can save energy at their homes, their childrenâÄôs schools and their workplaces, Thiede said.
The event was a mosaic of different approaches in dealing with climate change, Nerbonne said.
âÄúEveryone cares about climate,âÄù Nerbonne said.
This is the time for transformation, she said, because there is not time for slow change.
âÄúWe need to lead the way in the United States so countries around the world can feel like there is a joint approach,âÄù Nerbonne said. âÄúThe future without action is something we do not even want to think about.âÄù