Minnesota is one of only 15 states that select candidates via caucus. 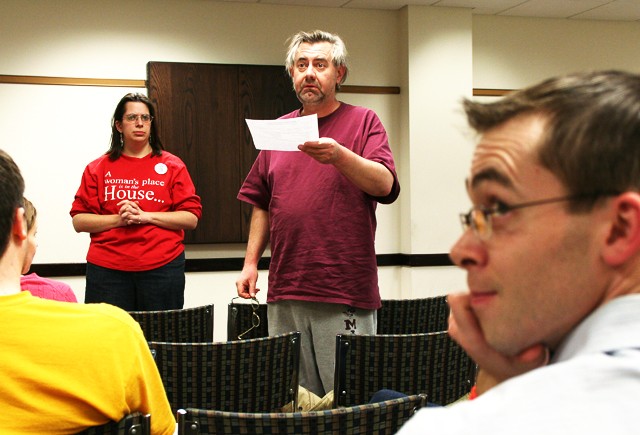 Paul Scheurer passes a resolution at the DFL caucus in Coffman Memorial Union on Tuesday that would give University of Minnesota Police more incentive to live on campus in order to increase their presence in the community.

The issues discussed were as local as providing incentives for University of Minnesota police to live on campus, and as global as the Israeli-Palestinian conflict. After historic turnouts in 2008, attendance at TuesdayâÄôs political party caucuses was a handful instead of a room full. In MinnesotaâÄôs first step toward electing a new governor, Minneapolis Mayor R.T. Rybak and state Rep. Marty Seifert won their respective Democratic-Farmer-Labor and Republican caucuses held Tuesday night at the University. Statewide, those two candidates led their parties as of press time, though Seifert had a comfortable lead and Rybak was trading the top spot with the state Speaker of the House, Margaret Anderson Kelliher, DFL. The precinct caucuses are the lowest of several tiers leading to the nomination of each partyâÄôs gubernatorial and U.S. House of Representatives candidate. Beyond the straw poll âÄî the results of which will shape the next few months of campaigning and fundraising âÄî caucus-goers elected delegates to represent the precinct at upcoming city, county and senate district conventions. Elora Turner, a political science major at the University who volunteered to convene the DFL caucus, said she hopes to ultimately become a delegate at the state convention, where candidates are officially nominated. Minnesota is one of only 15 states that select candidates via caucus, a ground-up approach that some believe puts too much power in the hands of too few people âÄî and few people braved the cold on Tuesday. Those who did, however, advocated strongly for the system. âÄúItâÄôs the only way for the average citizen to have an impact on the political system,âÄù Minneapolis resident Paul Scheurer said. âÄúItâÄôs free of charge, and we have volunteers who come and organize everything. ItâÄôs how the system works, and all you have to do is show up.âÄù Rep. Phyllis Kahn, the state representative for the district that includes the University, likewise defended caucuses. âÄúItâÄôs a very personal approach to politics,âÄù she said. âÄúMany people, like me, the first thing we ever did was wander into a caucus.âÄù DFL In the pair of straw polls taken at Coffman Union, Rybak received 16 of the 32 votes cast. That was enough to easily outpace the pack of other DFL candidates on the ballot, despite the fact that Rybak spent most of his evening in St. Paul. âÄúIn his time as mayor, heâÄôs shown himself to be intelligent, a great political mind, and heâÄôs very personable,âÄù said Martin Cech, a University sophomore and one of 11 who signed on as delegates in Precinct 4. Rybak, who one caucus-goer referred to as the âÄúsexy college candidate,âÄù spoke to about 20 precincts in St. Paul, giving short speeches to prospective delegates. He focused on his strengths in Minneapolis and highlighted jobs, healthcare and education as the most important issues Minnesotans are facing. âÄúIâÄôm really honored to have such great support from the U, and IâÄôm going to ask for more support in every turn,âÄù Rybak said as he left Ramsey Junior High School in St. Paul. âÄúWeâÄôre going to give [students] the future they deserve.âÄù Republican Attendance was similarly sparse at two Republican caucuses on campus, each attended by six students. Seifert won the straw polls âÄî one unanimously âÄî at both. The caucuses, held in Nicholson and Ford Hall, selected a handful of delegates to send to Republican conventions beginning Feb. 13. Among those selected was Derek Trout, a marketing and management first-year. âÄúI came here because I knew it was needed for the Republican Party to have some sort of a chance in the governorâÄôs election,âÄù Trout said. Despite the low turnout at the caucus, which he called a âÄúflop,âÄù TroutâÄôs passion for politics and for Seifert as a candidate was unmistakable. Kurt Weber, a first-year economics major, was also selected as a delegate and intends to support Seifert in the conventions as well. Both Weber and Trout said they felt a connection to SeifertâÄôs roots. âÄúHe grew up having a kind of hard life, and yet he still really persevered and decided that he wanted to do something with his life,âÄù Trout said of Seifert. MinnesotaâÄôs economy topped the list of concerns for Weber and Trout. Weber also said he thinks health care and education will be important issues in the election.