In the Big Ten, there’s no such thing as a sure thing

On paper, Minnesota should handle Michigan easily, but recent upsets have demonstrated the parity in the conference. 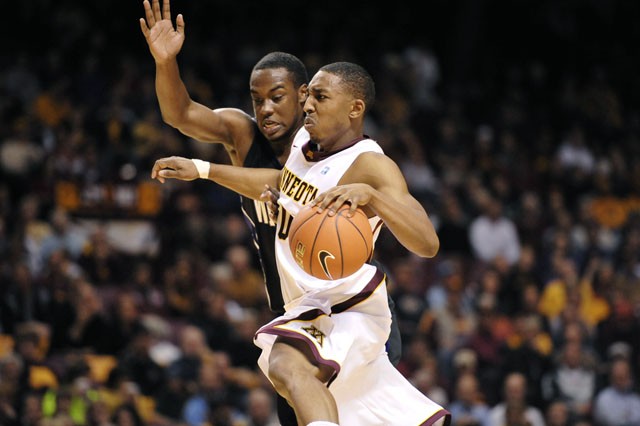 A quick look at the Penn State menâÄôs basketball teamâÄôs latest results should strike fear into the Gophers.

Minnesota doesnâÄôt play the boys from University Park, Pa. this weekend, but the Nittany LionsâÄô recent upsets âÄî wins over No. 17 Michigan State and No. 23 Illinois in consecutive games âÄî have proven that each Big Ten team is capable of beating any other.

So even though the 15th-ranked Gophers (14-4, 3-3 Big Ten) head to Ann Arbor with significant advantages in size and experience, they canâÄôt take Michigan lightly on Saturday night.

The Wolverines (11-8, 1-5) have already come painstakingly close to notching key upsets this season. They held a second-half lead over then-No. 9 Syracuse before falling on a neutral court in the Legends Classic tournament.

Michigan also took then-No. 3 Kansas to overtime in a Jan. 9 loss and gave No. 1 Ohio State all it could handle in a 68-64 defeat. Both of these games were at Crisler Arena, where the Gophers havenâÄôt won since 2008. And the thought of an 83-55 loss last March must still sting for some of the Minnesota players.

Michigan also beat the Gophers at Williams Arena, 71-63, last season, but the WolverinesâÄô two best players from that team âÄî Manny Harris and DeShawn Sims âÄî are gone. Also unlike last season, the Gophers have Trevor Mbakwe; the Big TenâÄôs leading rebounder could feast on the conferenceâÄôs 10th-rated rebounding team.

However, the prospect of an upset looms partly because Minnesota hasnâÄôt won on the road in more than 40 days, dating back to a Dec. 8 win at St. JosephâÄôs. The Gophers have since lost three straight road games, all in conference play, and they need to overcome those road woes.

The most recent games for both teams should give the Gophers a little more confidence, though, as they come in on a two-game winning streak that includes an upset over then-No. 8 Purdue. The Wolverines, meanwhile, have lost five straight.

âÄúWeâÄôve kind of gotten ourselves back on the right track by playing well this week with the win over Purdue and Iowa,âÄù Smith said during this weekâÄôs Big Ten teleconference.

The question will be whether or not the Gophers play down to their opponentâÄôs level as they are prone to do. This will also be their first game since spring semester started for Minnesota, and senior guard Al Nolen said having to start studying again makes the transition just a bit more difficult.

Class at Michigan has been back in session since Jan. 5.