The group of about 30 students listed concerns with Kaler's leadership at Friday's Board of Regents meeting. 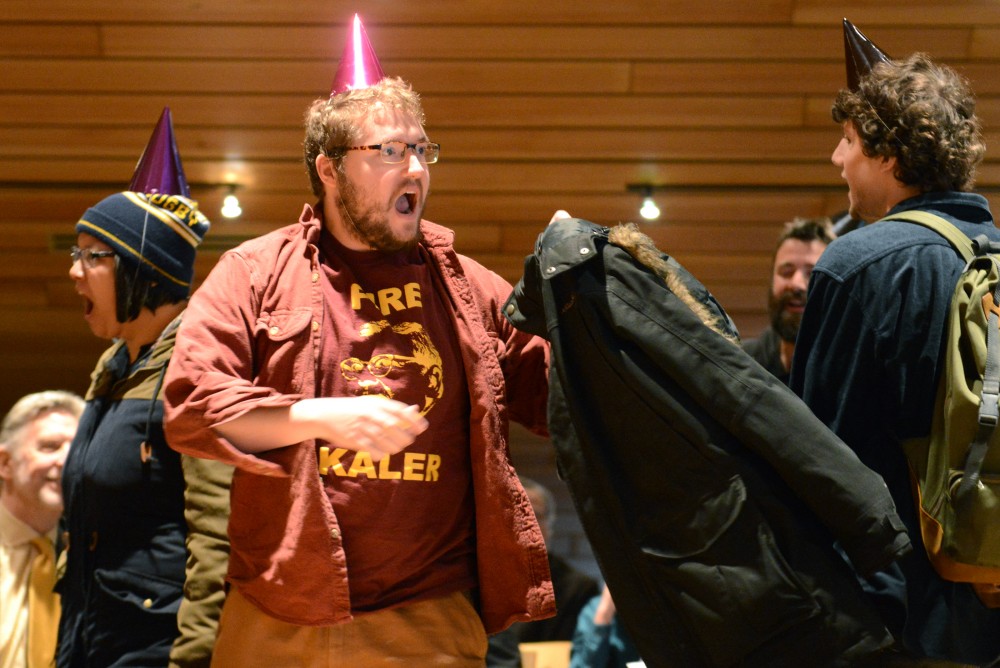 Protester Matt Boynton chants as they are escorted from McNamara Alumni Center on Friday, Dec. 9, 2016. Students for a Democratic Society protested the Board of Regents meeting.

About 30 demonstrators interrupted a University of Minnesota Board of Regents meeting Friday, demanding the resignation of University President Eric Kaler, citing a lengthy list of complaints.

The group, which included members of Students for a Democratic Society and Differences Organized, stood up during Kaler’s presentation to the board and read a list of grievances, like student debt, rising tuition and what protesters viewed as an inadequate response by Kaler to a series of hate-related campus incidents.

“We’re calling on the Board of Regents to replace Kaler with a more accountable president, a president who better meets the needs of students, faculty and workers on campus and actually represents transparency,” said SDS Member Matt Boynton.

Demonstrators also called on Kaler to unconditionally support creating a sanctuary campus at the University.

While the board recessed during the demonstration, many regents stayed in the room to hear the students’ complaints. Kaler left the room as the protest began.

“I have empathy for all of our students, including those who disagree with me,” Kaler said. “They’re angry and we work every day to try to make the University a better place.”

Demonstrators spoke for about ten minutes before University of Minnesota Police Department officers told them to leave or face arrest.

The protesters — chanting “fire Kaler” — were then escorted out by police and the board meeting resumed.

“We’re not trying to suppress any dissent or conversation,” said UMPD Chief Matt Clark. “But the regents meetings have a set of rules so they can conduct their business, and we’ll follow that.”

Board Chair Dean Johnson said it’s important to listen to dissent, but he feels the University has improved considerably in a number of areas.

“Let your detractors be your teachers,” Johnson said. “Having said that, by the reports that were given to us … the University has never been in a stronger position than it is now financially, with student enrollment, with graduation rates. It continues to be a better, more competitive place for students and faculty.”

SDS members said they planned a disruption like this since six students were arrested during a protest at a regents meeting in June.

“We want to be more responsible students, we want them to hear what we have to say,” said Delaney Facklam, a technical writing transfer student and SDS member.

Carrying a sign that read “I owe 40,000+ in student debt, why is this a reality for our students?” film and media senior Ryan Buechner said the disruption’s focus on student debt was a big reason why he got involved.

“There needs to be some sort of structural reform within the financial system of University,” Buechner said. “It is unsustainable for students to have to pay this kind of money.”

Signs were posted on the doors of McNamara Alumni Center, where the meeting was held, announcing that no signs or banners were permitted in the building, but some students brought in signs anyway.

Additionally, anyone entering the board chambers was required to have their bags searched by University police and campus security guards.

Marty Branyon, a senior studying history and political science and an organizer with SDS, said the group partnered with the Differences Organized coalition so they could address a variety of issues.

Branyon said SDS will continue to attend board meetings, either to disrupt or to listen.