Lingen had 31 yards and a touchdown in Saturday's loss to Maryland. 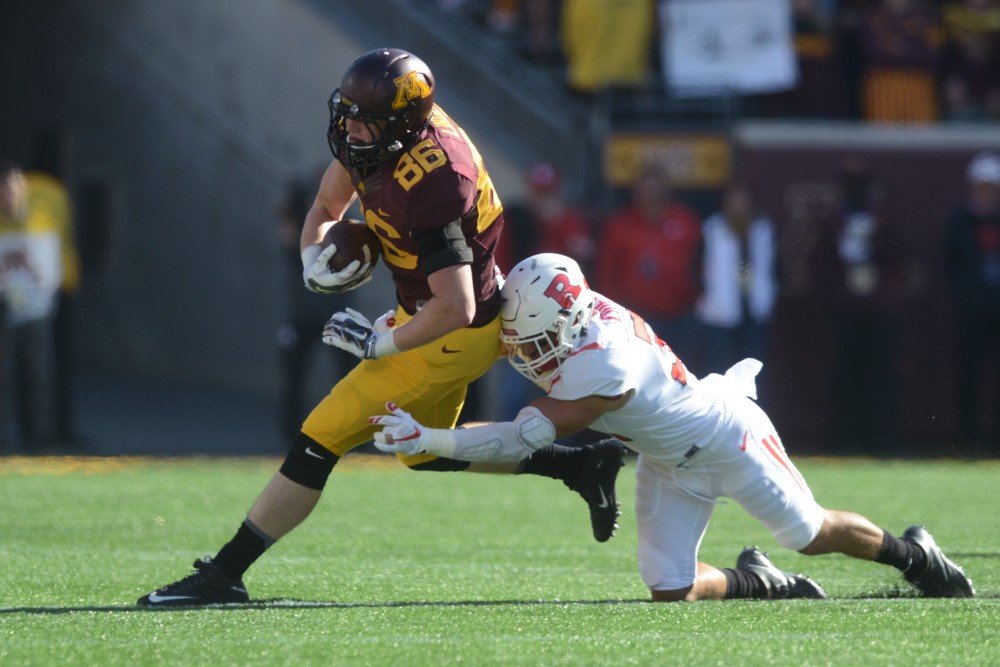 He played just three games junior year due to a torn shoulder, a broken collarbone and a broken foot throughout his collegiate career.

This season, he’s in his longest healthy stretch since his breakout 2015 season. He has three touchdowns and the third-most receiving yards on the team.

He scored his first touchdown of the season Saturday: a quick seven-yard pass up the middle that tied the game at 17. He hadn’t scored since Nov. 14, 2015 before that.

Lingen had 31 yards and a touchdown on two catches in the Maryland game — he had more receiving yards in one game than all of last year’s injury-riddled season.

“I thought Lingen had his best game,” said head coach P.J. Fleck. “I haven’t been here [enough] to talk about his career … but I thought he played like he should be playing.”

In the 2016 season, Lingen didn’t play the first game due to a torn labrum in his shoulder. He came back for the second week game against Indiana State and broke his collarbone. Then he came back to play Maryland four weeks later and he broke his foot — he sat out the final seven games of the season.

He had 28 yards and no touchdowns last year.

“The hardest part, I think, is sitting in the locker room before games,” Lingen said. “I mean you so badly want to be out there but you kind of have to take that step back, and you just have to be in a different role.”

Lingen said the new coaching staff does things a little differently when it comes to preventing injuries.

“There’s a huge emphasis this year on [staying healthy],” Lingen said. “Whether it’s in the morning with team coffee stretches to after workouts getting a roll or hip extension stretch, there’s a lot of different things we do day in and day out to help keep us on the field.”

In 2015, when Lingen was a sophomore, he was the most productive tight end on the Gophers’ depth chart. He had 33 catches for 428 yards and three touchdowns. He started 10 games and played in 12 — he missed one game with an injury.

The Gophers tight end wasn’t always one of his teams’ leading receivers.

“I probably caught 10-15 passes my entire career there,” Lingen said. “It just makes it really special whenever you get to catch the ball, but it really made you appreciate what the [offensive line] does.”

Lingen shares snaps with one of the biggest tight ends in college football, Nate Wozniak. You can pick him out of the Gophers team photo easily, as he stands 6-foot-10 and 280 pounds.

“I’ve been here with [Wozniak] for four years now, he’s a good buddy of mine,” Lingen said. “I’m just trying to keep pace with him, really, he’s a monster.”

The two senior tight ends are two of the most experienced athletes on the team.

Offensive coordinator Kirk Ciarrocca said the tight ends’ production last week was just a matter of them getting open.

“They’ve been involved all year,” Ciarrocca said. “The quarterback’s going through his progressions, and the guy that’s open is open … I didn’t know going into the game that they were going to have a big game.”

Lingen plans to graduate this year with a degree in supply chain and operations management.

He wants to start his own business in the twin cities. He doesn’t know what type of business yet.

“Not sure yet, don’t really have that idea yet,” Lingen said. “Always just kind of thinking, just trying to have that mindset of what could be better, what problems are there that I could try to provide solutions for.”